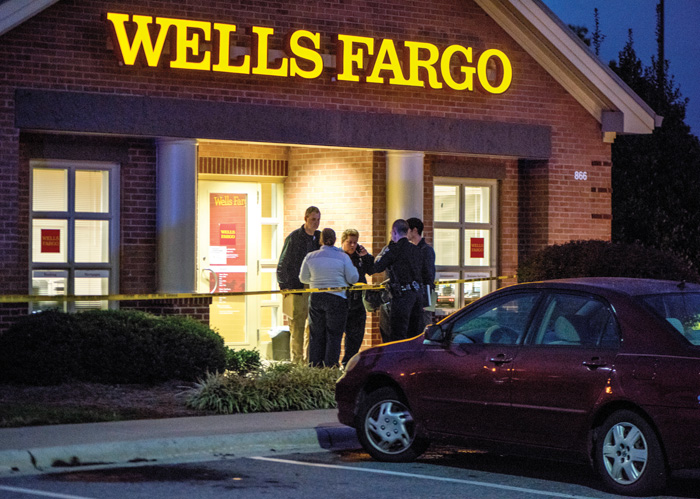 A suspected bank robber died after a brief chase with Salisbury Police that ended on Jake Alexander Blvd. near the Mooresville Road on Nov. 9. The Wells Fargo Bank on the corner of Jake Alexander and Brenner Ave was and active crime scene for JON C. LAKEY / SALISBURY POST

The Rowan County district attorney’s report this week on the Nov. 9 police killing of Paul Jones III confirms what Salisbury Police Chief Jerry Stokes and many others said at the time: Officers’ actions were lawful.

The use of deadly force is not something to celebrate. But the district attorney’s decision not to charge the three officers is a testament to their training, experience and professionalism under pressure — qualities that should be held up for praise.

The report, based on the SBI investigation, backs up the narrative that police released after the incident, with witnesses providing a few more details. Wearing a ski mask, Jones entered the Wells Fargo on busy Jake Alexander Boulevard around 5 p.m. and told tellers to give him cash. He demanded car keys from people in the bank and shot one man who did not appear to understand. (That man, Jose Santiago, survived.) With no getaway car of his own, Jones ran to Brenner Avenue, shot the driver of an Acura and commandeered the vehicle. (Driver Larry Dalton also survived.) Police gave chase as Jones sped down city streets, eventually turned onto Mooresville Road and circling back to Jake Alexander Boulevard, where he ran into the rear of another vehicle.

Police quickly surrounded the vehicle. Jones fired two or three shots. As he stopped to reload — ignoring calls to drop the gun and get out — officers fired back and killed Jones.

The robbery was a desperate act, committed by an armed man who did not hesitate to shoot people who were in his way.

Jones’ relatives later said they were shocked and sorry about the incident; they never suspected the 25-year-old would commit such a crime. An autopsy found only low levels of alcohol and marijuana in his system. The story of what sparked this burst of violence died with Jones.

The Salisbury Police Department, under a microscope for several years now, has worked with federal authorities to develop a plan for stemming the rising tide of gun violence. Prevention is ideal, but the reality of police work is that officers have to deal with dangerous suspects in volatile situations. Colvin, Basinger and Martinez used the force that was necessary to end the threat. Thank you, officers.