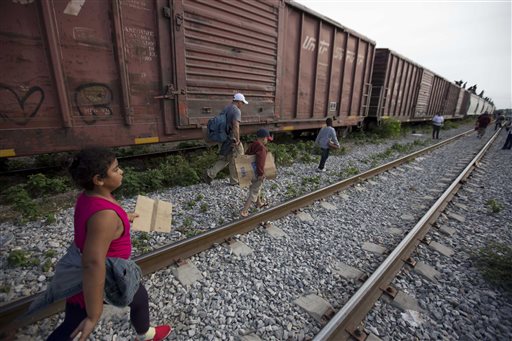 In this July 12, 2014 file photo, migrants walk along the rail tracks after getting off a train during their journey toward the U.S.-Mexico border in Ixtepec, Mexico. Many of the immigrants recently flooding the nations southern border say theyre fleeing violent gangs in Central America. These gangs were a byproduct of U.S. immigration and Cold War policies, specifically growing from the increase in deportations in the 1990s. (AP Photo/Eduardo Verdugo)

Neither Democrats nor Republicans have any desire to change the immigration laws, and each party has different, hidden reasons.

In the oath of office, Obama swore to keep the law of the land; however, he ignored immigration laws with which he disagreed, saying they were broken and needed fixing.  Congress should have contested this. However, Republicans were not obliged to call his hand since he was president. Besides, they would have been called racist.

Why do Democrats favor ignoring immigration laws?  One example is children were put on trains to America thousands of miles away, placed with families unknown to them. The parents were allowed to enter the country and rejoin their children.  When these parents get a driver’s license, they register to vote and remember they were allowed in the country by Democrats. So immigration for Democrats enlarges the voting base for their progressive agenda.

Republicans, on the other hand, have a different purpose in mind.  Employers and donors to the party need people to work. When you have more people looking for jobs than the number of jobs available, this depresses wages. When there are fewer people to fill the needs of the job market, wages trend higher since employers are willing to pay more to get the job done.

These are the reasons for the lack of action by Congress; all other reasons are just to cover the big lie.  The old adage proves true:  to understand truth, just follow the money.

Neither of the above reasons for the immigration quagmire favors the American people; only the politicians and wealthy individuals reap rewards.

This is why Americans voted for President Trump.  They were tired of politics as usual from Washington.

The Alamance 12: Former inmates being prosecuted for voting