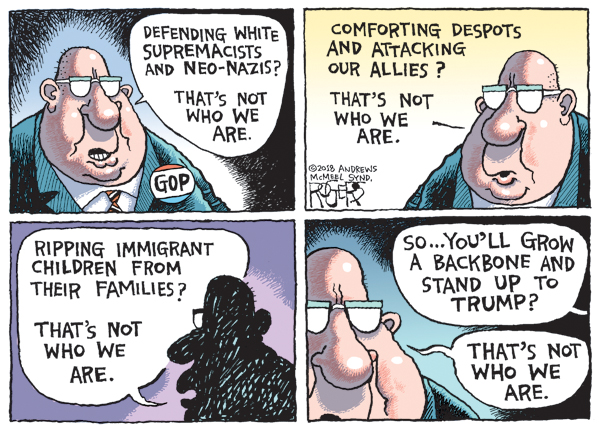 Before the story fully fades from view, it’s important to remember one of the most shameful episodes in a shameful presidency: the Trump administration’s policy of “zero tolerance” toward illegal immigrants that separated more than 2,500 children from their parents.

Public outcries and legal challenges forced Trump to rescind the policy in June, but hundreds of children remain in government custody — “terrified, traumatized, tearful” reminders, as the Washington Post put it, of an administration that has been both colossally inept and cruelly immoral.

Officials were clearly and directly warned that their policy would divide families and cause permanent psychological damage to the abandoned children. And yet they went ahead anyway, pursuing their ruthless determination to “enforce the law” with no apparent concern for the damage they were inflicting.

But it’s important to remember this period for another reason. It demonstrates that checks and balances still exist, that the judicial system remains a separate and vital branch of government capable of deterring this president’s worst impulses. Civil rights lawyers sued the administration, and a courageous federal judge, appointed by a Republican president, took their complaints seriously and ordered that families be reunited.

Judge Dana Sabraw ruled that the government’s policy “arbitrarily tears at the sacred bond between parent and child.” It was, he wrote in June, “brutal, offensive, and fails to comport with traditional notions of fair play and decency.”

Last week, Sabraw again berated the government when it argued that civil rights organizations should be responsible for tracking down the parents of the children still held in detention. “This responsibility, of course, is 100 percent on the government,” the judge declared. “The government has the sole burden and responsibility and obligation to make this happen.”

The Trump administration “is at fault for losing several hundred parents” during its anti-immigrant crusade, Sabraw continued. And for every one who isn’t found, “there will be a permanently orphaned child” — a living, lacerated legacy of this president’s worst impulses.

The crackdown on illegal immigrants is not an isolated incident. It is part of a much larger pattern that combines extreme xenophobia with political opportunism.

Even though Trump married two foreigners — and his mother was born in Scotland — he’s tried at every turn to limit immigration to this country, both legal and illegal. One example: In the current fiscal year, the U.S. will admit only about 25,000 refugees — a disgracefully low figure compared to the annual quota of 110,000 during President Obama’s last year.

On the campaign trial, Trump revels in whipping up nativist fury, denouncing immigrants as “animals” and encouraging chants of “build the wall,” the ultimate symbol of his cynical conviction that demonizing foreigners benefits him politically.

Trump’s war on immigrants is part of another pattern, as well: his adamant refusal to accept facts he finds inconvenient. Every study shows that immigrants commit fewer crimes than native-born citizens, but he continues to rail against “rapists” and “killers” he claims are pouring across the border to ravage innocent Americans.

Another example of Trump World’s willful denial of reality: Commander Jonathan White of the U.S. Public Health Service recently told a congressional hearing that as the “zero tolerance” policy was being formulated, professionals in the Office of Refugee Resettlement “raised a number of concerns” about the potential consequences.

Decision-makers were warned, White said, that their policy would fracture families and damage children. “There’s no question that separation of children from their parents entails significant potential for traumatic psychological injury to the child,” White testified.

When lawmakers asked about the response to those warnings, White replied: “The answer I received was that family separation was not a policy.” That was a ridiculous, even tragic, answer that totally ignored an entirely predictable outcome. It’s like the administration saying, “We’re going to blow up this dam, but the flooding we’ll cause is ‘not a policy,’ so it’s not our responsibility.”

The rampant self-delusion continues. Trying to paint a rosy picture of the situation, an official of the Immigration and Customs Enforcement agency described the facilities where some youngsters are detained as “more like a summer camp,” with basketball courts and soccer fields.

That description is just another absurd comment that ignores the searing truth, described by Devin Miller of the American Academy of Pediatrics: “Toxic stress, which is caused by prolonged exposure to heightened stress, has detrimental short- and long-term effects.”

It’s time for us to get smart about how…