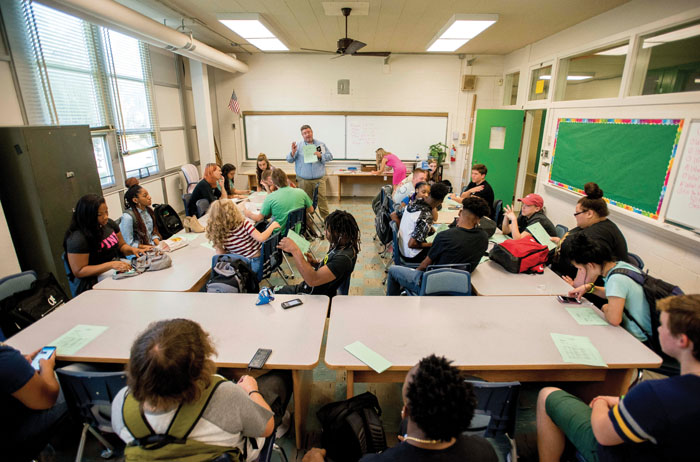 JON C. LAKEY / SALISBURY POST Co-Teachers Brian Whitson and Miranda File give instructions to the students in first class gathering of the day which is an Advisory class. Students at North Rowan High school reported for first day of classes on Thursday. North begins classes over two full weeks earlier then the rest of the Rowan Salisbury Schools. on 8/9/18 at in Spencer, NC,.

SALISBURY — Attracting and retaining good teachers is a riddle that puzzles every school district. In recent years, the issue has gained a sense of urgency as funding is cut and fewer young people choose to pursue education careers.

But Rowan-Salisbury Schools administrators think they may have found a silver bullet in district renewal.

Like many districts, Rowan-Salisbury has struggled to fill positions. The school system has a climbing teacher turnover rate as more veteran teachers retire and fewer young professionals take their place. According to N.C. Report Cards, turnover for the 2016-17 year was 15 percent — a little higher than the state rate of 13 percent.

As of Thursday morning, the school district had 89 openings — 32 of those for certified positions.

“Those are the ones who have their own classrooms and who are really driving engagement,” said Jeanie McDowell, teacher recruiter.

Administrators have long noted that the number of education majors is falling — data that’s upheld by the Census Bureau. The data, compiled by career website Zippa, shows that in 1975, education majors made up 21.6 percent of all college students. By 2015, they made up just 7.6 percent.

But the demand for teachers hasn’t changed — if anything, it’s grown.

Superintendent Lynn Moody has often referred to the teacher shortage as a “crisis,” and Rowan-Salisbury Schools has taken creative measures to address its empty classrooms.

“Some of the things that we are doing I have not seen in other schools,” said Kristi Rhone, RSS director of human resources.

Stymied as they sometimes might be, administrators are looking for educators who have the skills to teach students and who can guide and care for them.

“We’re not just going to put a body in a classroom,” McDowell said.

Rhone and other administrators believe that flexibilities granted by district renewal may just give them the breathing room they need. Becoming a renewal school district — a move approved by the State Board of Education on Aug. 2 — grants Rowan-Salisbury Schools charter-like flexibilities. That means the district will have control over its calendar, curriculum, budget and hiring practices — to a certain extent.

“That’s not happening really fast and quick. … It’s going to have to be several conversations,” Rhone said.

While Rhone believes it will take a while for the hiring flexibilities to come into play, during a Thursday interview she speculated what such freedoms could mean for the district.

First and foremost, Rhone thinks being a renewal district will give Rowan-Salisbury Schools an edge at job fairs and other hiring venues.

“I think that’s going to be our strongest recruiting tool,” she said.

Rowan-Salisbury is the only school system in North Carolina’s history — and perhaps the nation’s — to be given charter-like flexibility districtwide. It’s a degree of local control that public schools have been after for decades, and Rhone predicts that it will help the district attract new and veteran educators like.

“We can now really start recruiting some very strong candidates,” she said. “Not to say we didn’t have any before, but I think that we will have even more — because people are interested in it.”

Under state mandate, charter schools can have as much as 50 percent of their staff uncertified — a freedom RSS now shares. That doesn’t mean the district is going to hire people willy-nilly, however.

“What we’re looking for are people who have some kind of experienced background,” Rhone said. “It would have to be relevant to the area they would be working in.”

According to Rhone, the district will draw up qualification requirements for uncertified candidates. Some of those qualifications and guidelines will be determined by the teacher-led design teams that will be working to rebuild the district over the course of the 2018-19 school year and beyond.

For example, the district will likely stipulate that uncertified candidates have a great deal of experience in the field they’re interested in teaching. And, most likely, they would serve in adjunct-like positions — augmenting a regular class, teaching a specialized yearlong course or offering a once-a-year elective.

For example, a local lawyer might be interested in teaching a special civics or social studies course on law once a year. Or a yoga instructor may want to take over a P.E. class for a single unit on yoga.

“So students will have an opportunity to see (the subject) from a diverse perspective,” Rhone said.

“We still want to make sure we’re putting the best people in the classroom. … We don’t want to use our flexibility to just fill spots,” McDowell said.

Some schools are already flexing their hiring freedom. In addition to being able to hire uncertified staff, administrators can use vacancies to create positions that could be unique to their school.

North Rowan Elementary, which gained early charter-like freedoms as a restart school, has already implemented this. The school is looking for a parent liaison for the 2018-19 school year — a position that didn’t exist the previous year.

“We had to be very intentional about the way we thought through those and how we posted those,” McDowell said.

According to Rhone, school administrators saw a need for a staff member who would help walk parents through resources, tips, and the ins and outs of the education system. So they created the parent liaison using attrition.

In the coming months, Rhone predicts that a lot of schools will make similar moves.

While the hiring flexibilities and renewal bring a lot of excitement, Rhone and others know that it’s not for everyone.

Many teachers may decide to throw in the towel and retire or to move to more traditional districts. It’s a blow the district is anticipating.

“We understand that everybody will probably not choose to be a renewal teacher or to be part of the renewal district,” Rhone said. “We understand that. But for those that understand it and are passionate about it, I think they are going to be able to stay longer.”

If the district can ride out the wave of change, Rhone believes that the renewal will attract strong, eager candidates who are more likely to stay and grow with Rowan-Salisbury Schools.

Rhone emphasized that nothing is going to happen overnight. While she wouldn’t predict when new hiring practices might take effect, she said it is going to take a lot of work and communication to make the change.

“It’s stretching our minds too,” she said of the renewal.

Administrators plan to keep the lines of communication open throughout the process. In return, Rhone — and other administrators — ask that parents and county residents be open and honest with their concerns and contact their schools with questions, ideas and concerns.

“We’re trying to do a better job of making sure that people don’t make assumptions out of this,” Rhone said. “We’re going to be as transparent as we can be.”

“I’m really excited to see what we can offer our students and reach them in a way that we might not have been able to before,” McDowell said.