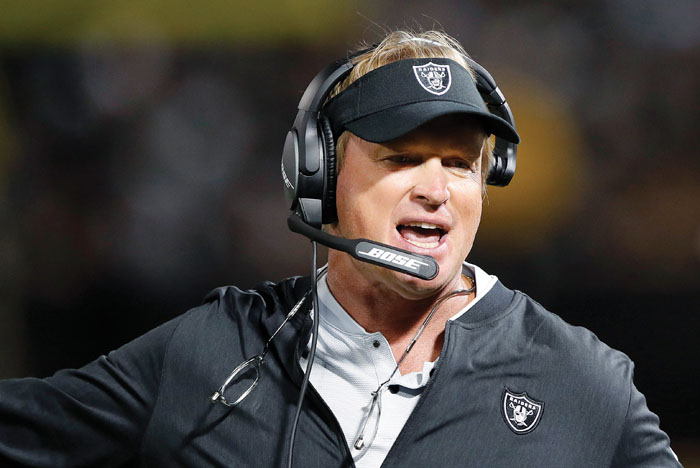 OAKLAND, Calif. (AP) — Jon Gruden jawed at the officials, worked closely with the quarterbacks and was once again adored by the Oakland Raiders fans.

It was as if he had never left the Coliseum.

Jon Gruden was a winner in his return to the sideline for Oakland when the Raiders got a touchdown pass from Connor Cook in a 16-10 victory over the Detroit Lions on Friday night.

“It was awesome,” he said. “I saw some recognizable faces that had gotten a little bit older. I saw some old friends who mean a lot to me. Like I said all along, this is a great responsibility. The nostalgia has worn off. We have to do something with the opportunity. But it was sure great to see the Raiders fans.”

Gruden was welcomed back warmly to the Coliseum for his first game here as Raiders coach since beating the Jets in a playoff game Jan. 12, 2001. Gruden was traded to Tampa Bay after that season and has spent the past nine years as an ESPN analyst.

Raiders owner Mark Davis lured Gruden back to the sideline with a 10-year contract worth a reported $100 million following a disappointing six-win season under Jack Del Rio.

The Gruden era appeared to get off to a rousing start when Marshawn Lynch ran 60 yards for a TD on the third snap, but the score was called back on a holding penalty by rookie tackle Kolton Miller.

“I was really ticked off after watching that get called back,” Gruden said. “Chucky came out for a brief moment tonight.”

Oakland settled for a punt on the only drive with starting quarterback Derek Carr, but scored three times in five drives with Cook at the helm. Cook threw a 7-yard TD pass to Ryan Switzer in the second quarter and led Oakland to a pair of field goals by rookie Eddy Pineiro. Cook finished 11 for 19 for 141 yards.

The Lions also welcomed a new coach in Matt Patricia, who opted to rest star quarterback Matthew Stafford, who got enough work in two days of joint practices against Oakland.

“We got a lot of good work in this week,” Patricia said. “He took a lot of reps and he saw a lot of different looks. That was the goal, to come out here and be able to get some of those different team tempo plays and have it scripted and a little controlled. Just thought it was a good opportunity tonight to have the other guys go out and compete.”

Lynch once again sat during the national anthem. Lynch also sat for the anthem all of last season but never gave a reason for his decision. No other players on either team demonstrated during the anthem, with the Lions all standing together with locked arms.

OKUNG RAISES FIST; MARSHALL, THOMAS NOT ON FIELD FOR ANTHEM.

DENVER (AP) — Linebacker Brandon Marshall and wide receiver Demaryius Thomas weren’t with their teammates on the sideline for the national anthem prior to the Denver Broncos’ game against the Minnesota Vikings on Saturday night.

Marshall and Thomas emerged from the tunnel behind the Broncos’ bench after the anthem was over.

In Arizona, Los Angeles Chargers starting left tackle Richard Okung raised his fist during the anthem prior to the team’s game against the Cardinals.

The league and the NFLPA have yet to announce a policy for this season regarding demonstrations during the anthem after the league initially ordered everyone to stand on the sideline when the anthem is played, or remain in the locker room.

Marshall has knelt in the past during the national anthem following the lead of his college teammate, Colin Kaepernick, who started the protests in 2016 to bring attention to social injustices. They played together at Nevada.

Pierre-Louis was arrested and charged in January with several misdemeanors, including possession of marijuana, after a traffic stop in suburban Kansas City. In March, he reached a plea deal in which the marijuana possession charge would be dropped if he completes a one-year probation.

Pierre-Louis, signed by the Jets during the offseason, can return to the active roster on Sept. 11.

He is eligible to participate in all preseason practices and games, but has been sidelined by an undisclosed injury and didn’t play against Atlanta on Friday night.

The 26-year-old Pierre-Louis has 84 career tackles in parts of four seasons with Seattle and Kansas City.