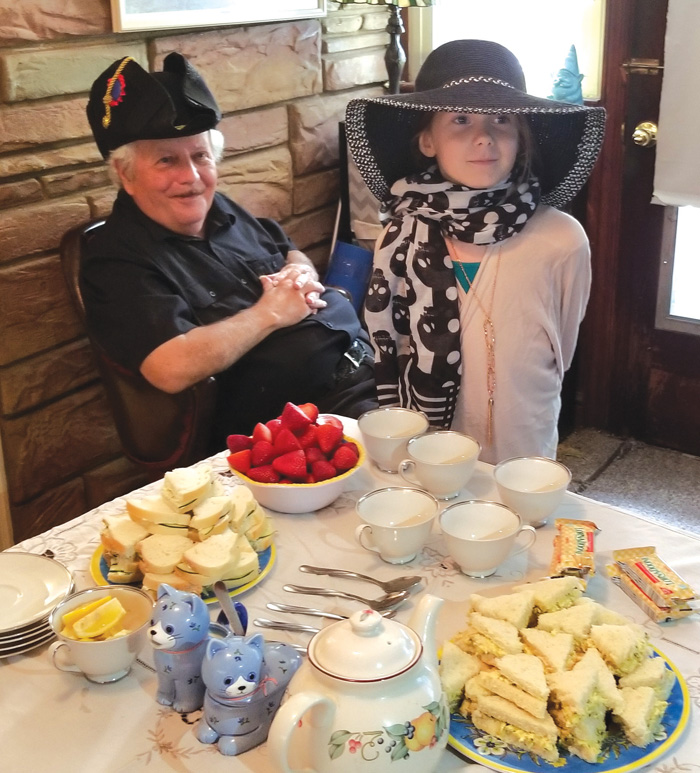 'Lord Nelson' drops in for tea

Tea sets and tea parties were always part of a little girl’s life. I’ve seen miniature tea sets on TV shows dealing with antiques, and I think little girls (though they be of this “modern” day) should never forgo that particular joy of the long ago period of time named for Queen Victoria.

Years ago, our museum used to have tea parties in our Butterfly Garden. That lasted until about 14 years ago, at which time the tea cups and saucers were packed away next to a plant press ( it’s not  used any more either).

Another holdover from long ago, still cropping up now and then at “proper” luncheons, is the cucumber sandwich! It speaks of the opposite of gluttony, a lightweight Summer snack (much lighter than even the tomato sandwich).

One recent day, my son Jeremy, his wife Rose, his grandmother Doris , and I were watching an old episode of “Dad’s Army” on Youtube. “Dad’s Army” is a late 1960s-late 1970s comedy series about the British Home Guard during World war II. In this particular episode, the Home Guard decided to have a party complete with tea and cucumber sandwiches. At the party, the air raid warden literally “woofed down” half a plate of that delicate “finger food.”

At the mention of “woofing down,” I just now remember something my brother Joe told me years ago when he was working at the old North Carolina Finishing Company before heading off to Mars Hill College. There was a worker there who had the strange habit of squeezing and rolling his homemade sandwich into a ball before eating it! In thinking about what sort of sandwich might benefit (or rather, survive) from that treatment, the only thing I can come up with is peanut butter, without the jelly! A tomato sandwich is definitely out too.

Back to cucumber sandwiches and tea:

After we laughed at the “Dad’s Army” episode, my daughter-in-law Rose realized that her niece, Carly, visiting from Florida, had never participated in that little girls’ staple of play from the Victorian Age (and a few decades following) — a tea party. Rose said that she, herself, had never made nor eaten cucumber sandwiches, so that would be a first for her as well. Rose decided that we would have a proper tea party.

The next day, the cucumber sandwiches were made, the table was set with the proper china, and the tea was steeping in the teapot. Rose also made chicken salad, making chicken salad finger sandwiches from it (since chickens don’t have fingers, I wonder if it should be “claw” instead of “finger?”).

A card table, properly “clothed” was used, as it could be positioned to allow Doris to participate in the tea party from the motorized recliner in which she spends the major part of the day.

Carly wore a long skirt, big floppy hat, and shawl, the kind of clothing normally seen in those BBC murder mysteries set in the 1930s. Calling on my vast collection of hats, side-caps, fezzes, and helmets, I made it possible for Carly to say (if asked) that Lord Nelson had taken time from his busy afterlife schedule to sit at table with her, take tea, and relish cucumber and chicken salad finger sandwiches!