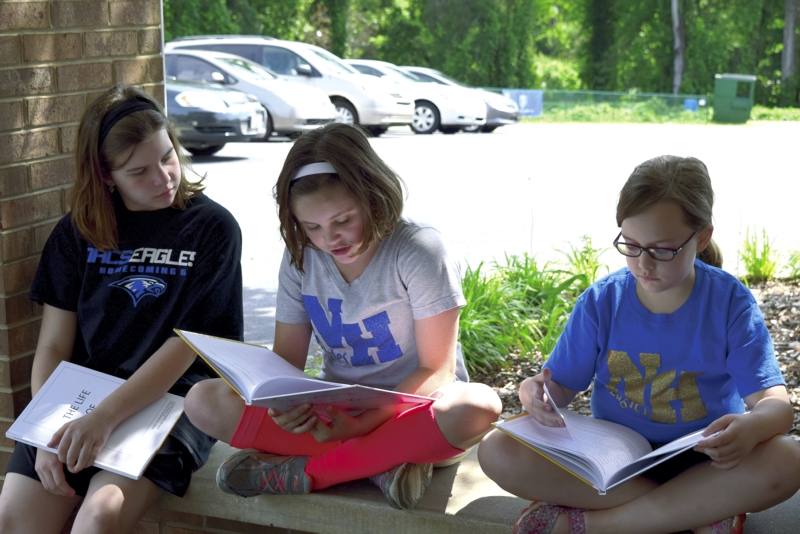 Lynsi Hunt looks over McKenna Anderson's shoulder as she reads. Megan Clifford pages through her book. These students and the rest of their advanced reading class had the opportunity to create and publish their own books this year. Rebecca Rider/Salisbury Post

I may dislike the way gifted education is done because I was once overlooked for a gifted program. Blame it on a clerical error. Three of my middle-school friends with the same grades I had were accelerated to algebra while I wasn’t. The high school had lost my file.

Our gifted programs need help. Money is limited. Schools will designate one child who is a point above the test cutoff as gifted and reject a similar child for being a point below. Many educators consider the system arbitrary and devoid of useful research. They want to offer enriched lessons to anyone who might benefit.

I thought schools were doing their best to make sensible decisions, until I had a distressing surprise. While rummaging through the gifted-program website of the school district educating some of my relatives, I found a list written by Janet Szabos in 1989 for Challenge magazine.

At first, I thought it was a mistake, or a joke.

It focused on what it called the “bright child” and the “gifted learner.” It came from the Tennessee Association for the Gifted. It compared bright children – who weren’t good enough for the program – with gifted learners who were, with 23 examples in two columns, side by side.

For instance, the list said a bright child “knows the answers” but a gifted learner “asks the questions.” The first “is interested,” but the second “is highly curious.” Szabos’ duel continued, the second description always better than the first: “is attentive” vs. “is mentally and physically involved”; “works hard” vs. “plays around, yet tests well”; “is receptive” vs. “is intense”; “enjoys school” vs. “enjoys learning”‘ “is alert” vs. “is keenly observant.”

Gifted designations are usually made in third or fourth grade. Szabos’ list assumes that educators can tell the difference between being interested and being highly curious when rating 8-year-olds. Almost all of Szabos’s differences are not measurable, making them susceptible to bad decisions such as ethnic stereotyping. Gifted-program directors give students “reasoning ability” tests – not mentioned by Szabos – but they are crude tools.

The list seemed silly at best. Szabos provided no research. I assumed this was a failed assessment system, mostly confined to Tennessee.

I was wrong. Szabos and her list get more than 7,600 hits on Google. Numerous school districts embrace it, though how they use it is unclear. Psychology Today’s “Gifted-Ed Guru” called it “rather excellent.” Some scholars have unmasked it as groundless nonsense, but it remains popular.

Scott J. Peters, an educational measurement expert at the University of Wisconsin at Whitewater, explained the Szabos list’s simple-mindedness on the website of the National Association for Gifted Children, even though he said the list “seems to be one of the most ubiquitous publications related to gifted education.” Many parents are devoted to it, particularly if they believe they have a gifted learner in the family. Jonathan Plucker, president-elect of the national association, said he thought many schools used it to keep gifted programs small and within budget.

I tried and failed to find Janice Szabos, but a reader who knew her and saw this column online gave me her real name, Janice Robbins. She sent me an erudite and charming note. She is a very experienced gifted education expert who wrote the list as just a tool for discussion at a conference. She never intended it for circulation. “It somehow took on a life of its own over the years and I dread even looking at it!” she emailed me.

I have met some actual geniuses. My favorite is Malcolm Gladwell, the most original thinker I have encountered in journalism. I was not surprised to learn that when he was in school, his mother gave him a stack of signed excused-absence slips so he could skip class anytime.

But in my experience, such super-intellects are exceedingly rare. My guess based on no data (nobody has counted them) is that there may be two or three at any school, but probably fewer. Since the real choice for a gifted designation is between your bright child and my bright child, why not give them both something extra?

Gifted education can do with less fatuous folklore and more good sense. I was not a gifted learner as defined by Szabos, but I wanted more than I was getting. The school let me catch up with my friends in math. There are a lot of other administrative errors that deserve similar attention.

Jay Mathews is an education columnist for The Washington Post, his employer for nearly 50 years. He created the annual America’s Most Challenging High Schools rankings of high schools and has written nine books.