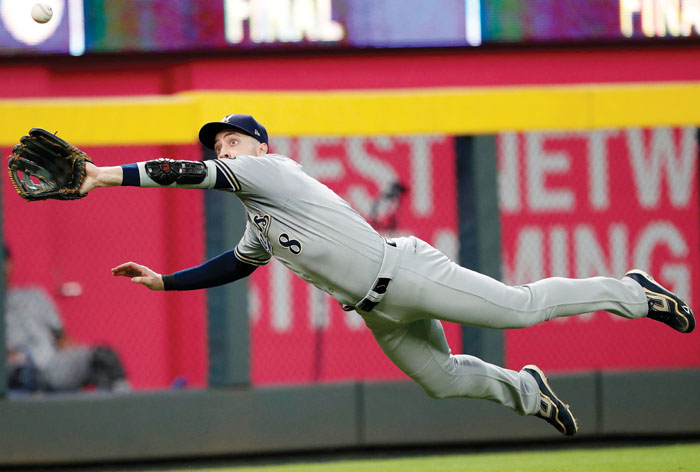 With a runner on second base and the Brewers down one run to the Braves with two outs in the seventh inning, Braun ran hard to his right and dove to rob pinch-hitter Ender Inciarte of extra bases.

Milwaukee followed up Braun’s play with a three-run eighth and got a 4-2 win over Atlanta on Saturday night that will help its NL playoff chances.

“I don’t think it’s too much of an exaggeration to say it felt like a season saver,” Braun said. “We’re well aware of where we’re at and how things have gone. Sometimes those things can snowball a little bit.”

Mike Moustakas hit a two-run double in the eighth inning and Josh Hader recorded a two-inning save to close out the Brewers’ rally.

The Braves began the game leading the NL East by one percentage point over the Philadelphia Phillies and had won nine of 12. Milwaukee snapped a two-game skid and pulled within two games of the NL Central lead.

The Brewers’ offense came to life in the eighth. Reliever Jesse Biddle (3-1) let the first batter, Christian Yelich, reach on an error when he dropped the ball at the bag after catching first baseman Freddie Freeman’s underhand toss. Lorenzo Cain singled, and both runners scored on Moustakas’ double.

It was the first time the Atlanta bullpen had blown a save opportunity since June 27 against Cincinnati. Before the eighth, Biddle had a 1.87 ERA in 29 appearances since May 19.

“It was one of those days where, shoot, he came out, he threw strikes, and they hit it,” Braves catcher Kurt Suzuki said. “You’ve got to tip your hat sometimes. Biddle’s been great.”

Moustakas, in his 14th game since coming to Milwaukee in a trade with Kansas City, is hitting .285 with eight RBIs in 49 at-bats. But he said Braun’s big grab was the difference.

“That catch definitely turned the game for us,” Moustakas said. “It got us going. It got us a little momentum. Seeing him going out and laying out like that and saving the game for the most part, that’s huge. We were able to rally the next inning and let our bullpen do the job.”

Hader hadn’t pitched in three days and was plenty rested to make his 16th two-inning appearance and earn his sixth save in such situations this year. He retired all six batter he faced, striking out three to pick up his ninth save in 12 chances overall.

Corbin Burnes (3-0) earned the win after facing four batters in the seventh.

Zimmerman hit a two-run homer in the first inning and a sacrifice fly to the warning track in the third. He chased Lester with a three-run drive in the fourth that made it 9-1. He is batting .355 (16 for 45) with four homers and 16 RBIs in 14 games since returning from the disabled list last month.

Anthony Rizzo got his 1,000th career hit for the Cubs.

HOUSTON (AP) — Ryon Healy had three hits and drove in the go-ahead run for Seattle, and Guillermo Heredia made a spectacular catch to preserve the lead in the eighth inning.

It was yet another win in a close game by the Mariners, who have taken three straight from their AL West rivals and improved to 44-17 this season in games decided by one or two runs.

With no outs and a runner at first in the eighth, Houston’s Tony Kemp hit a ball to center field that looked sure to drop in. Heredia raced to track it down and grabbed it as he fell to the ground. He threw to first to complete the double play.

CHICAGO (AP) — Cleveland’s Trevor Bauer pitched two-hit ball into the seventh inning before getting struck in the right leg by a line drive, and Michael Brantley and Jose Ramirez hit back-to-back home runs.

Bauer gave up one run and struck out eight before Jose Abreu’s liner leading off the seventh struck him high in the back of his leg. The Indians brought in Brad Hand, ending another dominant start. Bauer is 5-0 with a 1.72 ERA in his past eight outings.

NEW YORK (AP) — Rain pouring off his hat, Aroldis Chapman struck out Jurickson Profar with the bases loaded in a steady storm, preserving the Yankees’ win.

Rookie Miguel Andujar hit a tiebreaking two-run homer in the seventh inning, helping New York to its fifth victory in six games. Dellin Betances (3-3) got four outs for the win.

Chapman took over to begin the ninth and the Rangers tried to rally with a walk and a single. With home plate beginning to turn into a puddle, Chapman hit Adrian Beltre to load the bases with two outs.

BALTIMORE (AP) — J.D. Martinez hit two home runs, including a tiebreaking two-run drive in the eighth inning, and the Red Sox finished off a doubleheader sweep.

The Red Sox have won nine of 10 to improve their big league-best record to 84-35.

Harrison Bader and Jose Martinez each hit a two-run homer, helping the Cardinals move seven games above .500 for the first time since June 12. They are 15-9 since Mike Shildt was named interim manager on July 15.

Flaherty (6-6) was charged with two runs and three hits. Jordan Hicks got four outs for his third save.

Archie Bradley (3-4) hit Eugenio Suarez leading off the inning and walked Curt Casali with two outs. Barnhart then lined a 3-2 pitch into the gap in left-center, and Billy Hamilton and Joey Votto followed with RBI singles off T.J. McFarland.

Arizona dropped back-to-back games for the first time in more than two weeks. The Diamondbacks also remained in a tie for the NL West lead with the Los Angeles Dodgers, who lost 3-2 at Colorado.

MIAMI (AP) — Bryan Holaday delivered a pinch-hit RBI single with one out in the 11th inning, giving Miami the win.

Miguel Rojas led off the 11th with a single off Jacob Rhame (0-2) and moved to second on Magneuris Sierra’s sacrifice. Holaday followed with a grounder past third baseman Todd Frazier that easily scored Rojas.

It was Holaday’s second career game-ending hit, both this season, and the eighth walk-off victory for the Marlins. Holaday batted for Javy Guerra (1-0), who pitched the 11th.

TORONTO (AP) — Willy Adames had two hits and drove in the decisive run, helping Tampa Bay to its seventh win in eight meetings with Toronto this season.

Diego Castillo (3-2) pitched 2 2/3 scoreless innings for the win. Sergio Romo worked a perfect ninth for his 15th save in 22 opportunities.

Aledmys Diaz homered for the Blue Jays, who have lost five of six.

Toronto’s Sam Gaviglio (2-5) allowed two runs, one earned, and six hits in 5 1/3 innings. Gaviglio is winless in 14 starts since a May 25 victory at Philadelphia.

DETROIT (AP) — Tyler Austin hit a two-run homer in his Minnesota debut, helping the Twins to the win.

Austin was acquired in the July 30 trade that sent Lance Lynn to the Yankees. He was recalled from Triple-A Rochester on Friday.

Trevor Hildenberger yielded a two-run homer to Niko Goodrum in the ninth before finishing for his first save of the season.

Rejuvenated Cink back in contention at the PGA