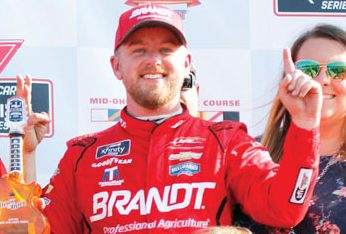 Allgaier used the sixth restart of the race to squeeze by Cindric on Turn 1, then held off his challenge on the 72nd lap for his third series win of the year. He also won at Dover and Iowa for JR Motorsport.

He was seventh for the last restart on Lap 69 but had used the caution to replace all four tires.

“We needed to get up front,” Allgaier said. “We know the last restart was going to be pivotal.”

“It’s NASCAR racing. We knew there would be a late-race restart,” Cindric said. “Great driver on new tires, great restart. We finished second. It’s frustrating. This place means a lot to me. We just came up short.”

“Justin did a great job moving through traffic,” Hemric said. “When you have new tires at some point during the run it tends to equal but he did a good job getting as far in front as he did.

“I was sitting there watching (Allgaier and Cindric) go at it. It was a heck of a race from my viewpoint.”

Cindric built a seven-second lead before the fifth caution on the 60th lap. Cole Custer rubbed tires with Tyler Reddick, spinning him and causing a rear right flat tire for Reddick, who could not get his car off the course.

Custer also spun Allgaier during the same incident and Allgaier dropped to eighth with laps and hopes of winning quickly fading.

“I really thought that was as far as we could get,” he said.

Allgaier won the 20-lap first stage after Cindric led the first 17 laps before pitting, yielding the lead to him. Cindric won the second stage, also 20 laps.

He is the grandson of the late Jim Trueman, who once owned the track and was the car owner when Bobby Rahal won the 1986 Indianapolis 500. Trueman, the founder of Red Roof Inn, died of cancer 11 days later. Cindric’s mother was Trueman’s daughter and his father is the president of Team Penske.

Allgaier moved up to fifth in the series standings with 751 points, 20 behind Bell. “We’re still pushing. I don’t know if we can get to first,” Allgaier said.

The race got off to an auspicious start when Dylan Murcott went into the tire barriers at Turn 4 on the first lap to bring out the yellow flag. He did not record a lap.

Former IndyCar driver Katherine Legge, 38, made her debut in NASCAR and was running in the top 15 before blowing an engine on Lap 65 in the first of a planned two races in the JD Motorsports Chevrolet this year. Legge finished 30th. She will also run the road course at Road America in Elkhart Lake, Wisconsin, on Aug. 25.

Tifft was third finishing third in the 2017 race following brain surgery in 2016. He’s from Hinckley, Ohio, 65 miles northeast of Lexington. Tiff. The driver of the Fanatics/Cleveland Indians Chevrolet threw out the first pitch at an Indians’ game on Thursday. … Truex drives for Matt Kaulig RaceTeam. Kaulig was a backup quarterback at Akron from 1992-95.

“When I was a kid I would to two races. I would go to Indy 500 and I would go to Mid-Ohio and hang out by the fence. This place I obviously have pretty special memories here.” — Cindric.

Bristol, Tennessee, on Friday. Kyle Busch was the 2017 winner.