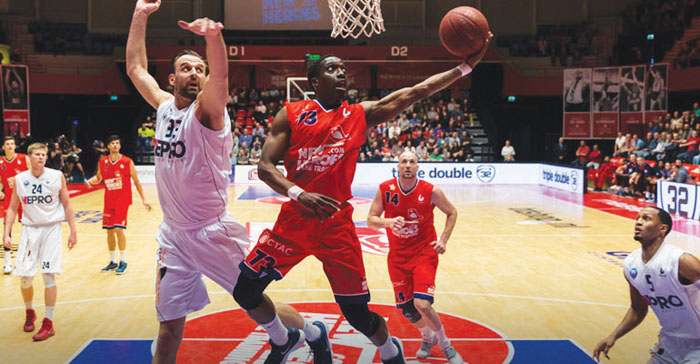 Submitted photo ... Former West Rowan High star Keshun Sherrill is shown going to the basket for the Den Bosch New Heroes of the Dutch Basketball League. Sherrill wears No. 73 in memory of his grandmother.

AUGUSTA, Ga.— Keshun Sherrill averaged 16.5 points and 3.4 assists in his first year of professional basketball, a testament to the kind of player he is.

That he wore No. 73 is a testament to the kind of person he is.

Sherrill, who is celebrating his 24th birthday today, made the No. 10 jersey famous as a member of the Augusta University Jaguars. That jersey was retired by the school late in an amazing career in which he broke Augusta’s scoring record and the Peach Belt Conference record with 2,333 points.

No. 10 wasn’t available when Sherrill reported as a rookie last summer to the Den Bosch New Heroes, a team in the Dutch Basketball League, so he requested No. 73.

“People ask me all the time about that,” said Sherrill, who scored 1,907 points during his high school days at West Rowan. “Most of them think it’s because 7 plus 3 is 10, but it’s not that. My grandmother, Catherine Carpenter, was 73 years old when she passed in 2012, and she meant a lot to me growing up. Every time I pull on that 73 jersey, I think about her, and I think about how happy she would be about me playing professional basketball. Then I go out and try to make her proud.”

There had to be skeptics in the crowd when they first saw Sherrill. Foreign imports, most of them Americans, are counted on to put up big numbers in the Dutch Basketball League. Sherrill stands just 5-foot-9 — that’s 1.75 meters in his new surroundings — but he quickly won everyone over with heart, hustle and a lot of buckets.

“Being a rookie and being so small (165 pounds), I think I amazed the fans with how high I could jump and how well I could score,” Sherrill said. “Everyone treated me great.”

Sherrill is down in Augusta, Ga., now, about three hours from home, preparing for a second season with New Heroes. Augusta  University still loves him, still gives him access to the gym and the weight room even though he’s graduated. A new DBL season starts in October and Sherrill will report for about a month of workouts and practices before that.

Sherrill had other offers, had chances to see a different country, but it wasn’t a difficult decision decision for him to return to New Heroes.

“The owner really liked me and the fans liked me, so why not stay in a place where you’re liked,” Sherrill said. “There’s a family there that cooked American food for me every two weeks, and they did a lot of things to make me feel at home.”

He wasn’t hard to like, shooting 85 percent from the free-throw line and almost 39 percent on 3-pointers. He scored 31 points in one outing and could be counted on for 20 in all the tough games.

“The competition level is good — this is the highest league in that country,” Sherrill said. “There are a lot of Division I American players competing as well as guys from the D-II schools, and the Dutch guys in the league can play. I had a pretty good year last year, there were nights when that rim looked really big, but I know I can do better. I want to be more consistent. We lost in the first round of the playoffs last year, and I want to do better than that.”

He played point guard most of the time, but he also got minutes as the off guard.

“That gave me a chance to use screens more and we have pick-and-roll plays we use with me as the 2-guard,” Sherrill said. “Defensively, I’m usually matched up against a bigger player, but I’ve learned to deal with that. That’s been the case my whole life.”

Keshun’s much bigger, older brother, K.J., is 6-foot-8, and will be playing in Germany again this year, although it will be with a new team. He’s already flown to Germany, where the season starts earlier than in the Netherlands.

“I saw K.J. about six times last season when we were in Europe,” Keshun said. “K.J. even came to one of my games after his season ended. The owner of New Heroes was very excited when he saw him. He wants him pretty bad, and maybe he’ll sign him someday and we can play together. We played a year together at West Rowan and a year at Augusta, so maybe we can play together again on a pro team. That would be the dream.”

The ultimate dream would be getting to play in the states in front of friends and family, but Keshun understands that may never happen. The last time he got a chance to take on the big boys in the USA was his senior year at Augusta, when he scored 32 points — 27 in the second half — against Wichita State.

“New Heroes gives me a car and a nice place to stay, so it’s really a pretty good life that I have,” Sherrill said. “I know I’m fortunate. I know how many guys are out there who would give anything to be playing basketball  for a living. I want to keep that ball bouncing for as long as I can.”