UNC yet to start adjusting amid suspensions 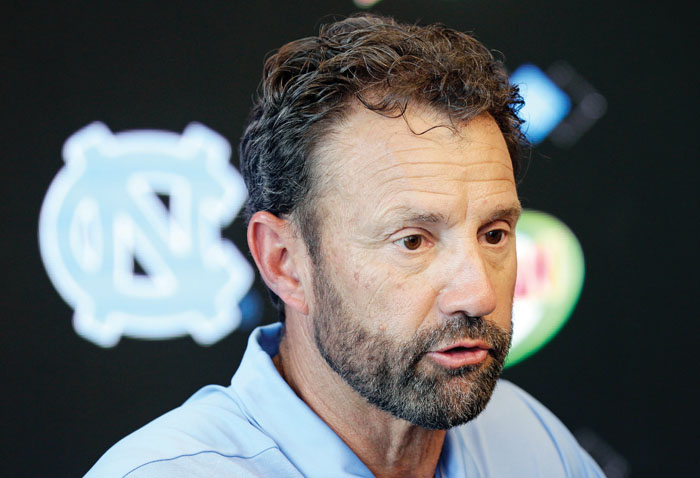 FILE - In this Monday, Aug. 6, 2018, file photo, North Carolina coach Larry Fedora makes comments during the NCAA college football team's media day in Chapel Hill, N.C. Fedora says the early part of preseason amp is focused on installing basic schemes, so having 13 players facing suspensions for secondary NCAA violations won't have a big impact in practice just yet. But soon, the Tar Heels will have to start adjusting the amount of reps for key players as they get closer to the season opener. (AP Photo/Gerry Broome, File)

The focus remains on installing basic schemes for at least a few more days, though the coaching staff will soon start adjusting the amount of reps for players facing suspensions as the Tar Heelws prepare for the season opener at California on Sept. 1.

“We know some guys are going to be out,” receiver Thomas Jackson said after Thursday morning’s practice. ‘We’d love to have them but we don’t. That’s not going to change our attitude going into the first game. . So it’s not really affecting anybody’s mindset.”

The school announced last month that it had reported the violations to the NCAA, then revealed Monday which players were being penalized and for how many games. Most notably, the list included four-game suspensions for quarterback Chazz Surratt — who had been expected to battle for the starting job — as well as returning starter Malik Carney at defensive end and another possible starter in fellow end Tomon Fox.

The bulk of the suspensions are for rotation players, players yet to see their first college action and a couple of walk-ons.

Fedora estimated the team has gotten through “97 percent” of its installation work ahead of Saturday’s intrasquad scrimmage. From there, the plan would be for coaches to review where every player stands, then begin to shift the reps accordingly with an eye more toward game preparation.

Yet he made that sound normal, even in the abnormal position of dealing with so many suspensions.

“We’re always mixing and matching all the time to find the best five, the best combination of five,” Fedora said. “But then you’ve also got to be prepared that if this guy goes down, how does that combination change? Is it the next tackle that goes in if a tackle went down? Or are we better with the next guard going in and this guard sliding over to tackle.

One positive for the Tar Heels is the starting lineup will largely be intact for the trip to Cal. The NCAA agreed to a school request to stagger the suspensions for Carney, Fox and fellow defensive end Tyrone Hopper (four games) because they all came at the same position. So Carney and Fox will play in the opener before beginning their suspensions, Carney in Week 2 at East Carolina and Fox in Week 5 at Miami.

In all, 11 players will miss the Cal game.