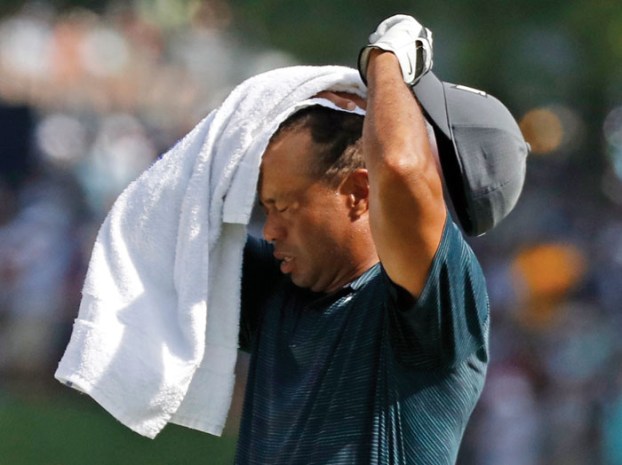 Tiger Woods wipes sweat from his face on the 17th hole during the first round of the PGA Championship golf tournament at Bellerive Country Club, Thursday, Aug. 9, 2018, in St. Louis. (AP Photo/Brynn Anderson)

Tiger changes shirt and game to stay in the mix

ST. LOUIS (AP) — What Tiger Woods really needed after two holes at the PGA Championship was a fresh start.

A change of shirts helped do the trick.

Too bad he couldn’t do something about those ugly numbers already stacked up on the scorecard.

A bogey-double bogey start left Woods scrambling to stay close Thursday. After having his caddie grab his backup shirt from the bag, Woods popped into a restroom near the 12th tee box, put on the dry shirt and shot 3 under the rest of the way to finish at even-par 70. That kept him within six shots of the first-round leader, Gary Woodland.

“It kept me in the golf tournament,” Woods said. “It could have easily gone the other way, being 3 over through two. A lot of things could’ve happened, and not a lot of them are positive.”

Opening the day on the back nine at steamy Bellerive Country Club, things couldn’t have been much worse for Woods after Nos. 10 and 11.

His opening tee shot found the right-side rough, and the ball sat down so low he simply pitched out, then left his approach shot nearly 40 feet short. Bogey.

His tee shot on the 11th landed in the left-side rough, 120 yards away, with the most direct line to the hole crossing a pond. Woods said he wasn’t aiming at the pin.

“I was trying to hit it left of the hole, and I stuck it in the ground and hit it short right,” he said. “I came up 12 yards short of my number.”

The ball hit the top of the hill and bounced back into the water. Woods had to scramble for a 6, and was 3 over before he grabbed his backup shirt, which seemed to make a difference.

It could have been better: He said he “tattooed” a 3-wood from 275 yards on the par-5 eighth, only to have a gust of wind kick up and push the ball into the rough instead of onto the green. He made birdie there, anyway.

It also could have been worse: He yanked his drive deep into the trees on No. 15, hooked the second shot as well and got up and down from a trampled lie 70 yards away to save par.

“Just tried to keep chipping away at it,” Woods said. “Just keep hanging in there.”

Three weeks ago at Carnoustie, Woods was five shots behind, in a tie for 32nd, after the first day. He held the lead Sunday before finishing three back, in a tie for sixth.

The quick turnaround between majors, to say nothing of the steamy weather in St. Louis — temperatures in the mid-80s — will make this a test of both golf and conditioning for everyone in the field.

“The main thing about major championships is making sure you have enough energy,” said Woods, who frequently grabbed the towel from caddie Joe LaCava, removed his cap and wiped the sweat from his head. “These are marathons. Four long days, slow rounds. They’re not quick, certainly not under these conditions.”

Unable to maintain his weight or curtail his sweating during the summer — “I’ve tried everything. I just sweat a lot,” he said — he has long carried an extra shirt in the bag. Normally, Woods changes after his warmup is done on the driving range.

But at Bellerive, there was no place to change on the 10th tee box, so he waited two holes.

Waited two holes to get the golf game going, too.

“I was able to grind out a score today,” he said.