PGA: Woodland feels at home in Missouri, leads with 64 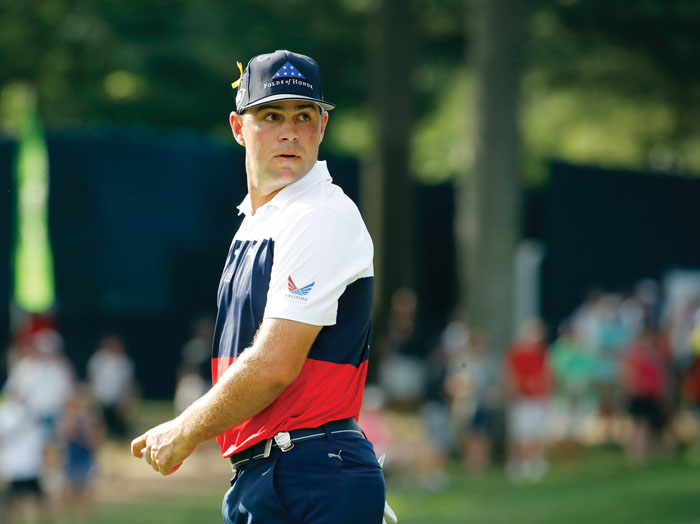 Gary Woodland walks to the 15th green during the first round of the PGA Championship golf tournament at Bellerive Country Club, Thursday, Aug. 9, 2018, in St. Louis. (AP Photo/Charlie Riedel)

ST. LOUIS (AP) — Gary Woodland fell in love with Bellerive when he first played it a month ago. It’s a big golf course that would play into the hands of a power player. It would be soft from the stifling heat and humidity of summer, allowing him to be aggressive.

Woodland delivered his best performance in a major Thursday at the PGA Championship.

All because of his putter.

Once he settled down while playing before so many family members and friends, the Kansas-bred Woodland ran off seven birdies and made five putts from 15 feet or longer for a 6-under 64, giving him a one-shot lead over Rickie Fowler in an opening round that otherwise went as advertised.

Keep it in the fairway, and low scores were available.

Woodland led 47 players who broke par, with 15 players were separated by three shots at the top. Tiger Woods was not among them because he was in thick grass and at the bottom of a pond early on before rallying to salvage a 70.

“If you can ball-strike your way around this golf course, you’ll walk off thinking it’s pretty simple,” Jason Day said after a 67. “If you struggle a little bit off the tee, then it obviously makes it harder.”

Fowler missed only three fairways and putted for birdie on all but two holes for his 65 in the morning.

Woodland is built like a player who grips and rips it, but the grip that mattered the most was on his putter. After starting work at the British Open with European-based putting specialist Phil Kenyon, Woodland decided to put an oversized grip on his putter Tuesday at Bellerive.

He holed a 15-foot par putt on No. 5 — “It’s the first time I’d seen a putt go in,” he said — and Woodland was on his way. Even sweeter was playing in front of 100 faces he recognized from home in Kansas — playing in Missouri, of all places.

“This is as close as I’ll ever play to home,” he said. “So it’s nice to have the support.”

Fowler played in the morning, when the greens were slightly smoother, and made five birdies over his last 11 holes for a 65. It was an important start for Fowler, who turns 30 this year and already is regarded as among the best without a major. The closest he has come to such a trophy is celebrating those won by his friends.

“It’s not something I necessarily worry about,” Fowler said. “Keep putting ourselves in position, get in contention … we have had plenty of runner-ups. Jack (Nicklaus) had a lot of runner-ups. We’ll just keep beating down that door.”

Two-time major champion Zach Johnson and Brandon Stone of South Africa were at 66.

Dustin Johnson reached 5 under until a few wild drives on the back nine cost him. The world’s No. 1 player had to settle for a 67, along with Jason Day, Justin Rose and eight other players.

It was more of a struggle for Woods, drenched in so much sweat that he changed shirts after 12 shots — that was only two holes and a tee shot. He had to make an 8-foot putt to escape with bogey on No. 10, and then dumped a wedge into the water for double bogey on No. 11. Woods was 3 over through seven holes, and then clawed his way back to even par.

“A lot of things could happen. Not a lot them were positive,” Woods said. “But I hung in there and turned it around.”

Defending champion Justin Thomas let a good start slip away. He didn’t make a putt outside a few feet over the last 12 holes and shot 69. Jordan Spieth, in his second crack at the career Grand Slam, opened with a double bogey and finished two bad swings off the tee that sent him to a 71.

The secret was simple: Avoid the rough.

Woodland, who played college basketball for one year at Washburn as a freshman before switching to golf at Kansas, is among the most powerful, athletic figures in golf. He had 145 yards to the front on No. 5 and couldn’t get it to the green.

For Woodland, success in the big events has been hard to find. He still hasn’t registered a top 10, and he hasn’t contended in any tournament since winning the Phoenix Open more than six months ago.

The frustration was in the short game, and Woodland finally had enough at the British Open when his manager hooked him up with Kenyon. They worked briefly at Carnoustie, last week at Firestone, and Woodland is starting to see the results.

His longest putt was from 45 feet down the hill at No. 11, followed by a 25-footer on the next hole. He finished off his round with a 20-foot birdie putt on the par-3 16th, and then a pitch-and-run to tap-in range after reaching the front of the green in two on the 591-yard 17th.

“You work so hard and you want to see results to back up the work that you’ve done,” he said, “and today was just a step in the right direction.”

Tiger changes shirt and game to stay in the…