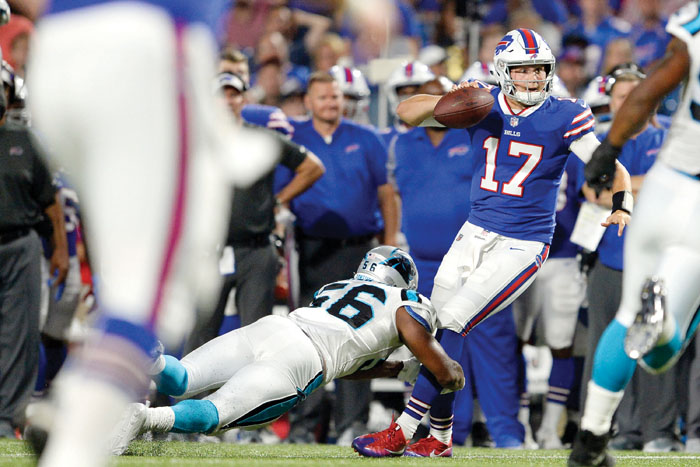 By JOHN WAWROW, AP Sports Writer
ORCHARD PARK, N.Y. (AP) — Bills receiver Kelvin Benjamin was not interested in what Panthers quarterback Cam Newton had to say before Buffalo’s preseason game against the Panthers.
“I’m just moving on from it,” Benjamin said repeatedly when asked about a discussion he and Newton had on the field about 90 minutes before kickoff.
Asked what Newton was trying to tell him, Benjamin responded: “I wasn’t even trying to listen.”
Newton declined to comment following Carolina’s 28-23 win Thursday, and merely shook his head while walking up the tunnel.
Tensions between the former teammates were raised a week ago, when Benjamin criticized Newton’s accuracy in an interview with The Athletic. Benjamin, who was traded to Buffalo in October, also questioned why the Panthers ever used a first-round pick to select him in the first round of the 2014 draft, because he thought he wasn’t a good fit in the offense.
The bad blood wasn’t resolved Thursday.
The Charlotte Observer posted a video showing Benjamin chatting with Panthers linebacker Thomas Davis when Newton approached the two and attempted to shake Benjamin’s hand. Newton waved away Davis, and then had a brief discussion with Benjamin before the receiver began walking away.
Newton followed and the two talked again. The discussion ended when Benjamin shrugged and turned to walk away, and Newton waved his hand at the receiver’s back.
“I walked away to allow them an opportunity to talk things out. That’s what it was,” Davis said.
“Just brothers having a conversation,” he added. “It’s one of those things. You go up to a guy. You talk about it. You hash things out or you don’t.”
The discussion didn’t affect the two once the game began with Benjamin and Newton playing key roles in touchdown drives in the first quarter.
Benjamin caught four passes for 59 yards, including a 28-yard touchdown reception from Nathan Peterman on Buffalo’s first possession. Benjamin scored by beating former Bills cornerback Kevon Seymour off the line, and was open when catching the pass at the 2 up the left sideline.
Newton responded on the next possession, completing 4 of 5 attempts for 67 yards as part of an 85-yard drive capped by Christian McCaffrey’s 2-yard run.
Newton finished 6 of 9 for 84 yards in two series. He was nearly intercepted on Carolina’s second possession when he overthrew tight end Greg Olsen over the middle. Jordan Poyer got a hand on the ball, but was unable to bring it in to his body.
Panthers coach Ron Rivera noted Newton may have been “a little jacked up” with some of the passes he missed, including the one to Olsen.
Rivera doubted Newton’s over-excitement had anything to do with the pre-game discussion with Benjamin.
“Cam’s always excited when it’s football, and he’s really one of those emotional guys,” Rivera said. “You’d like him just to settle in a little bit, slow down and deliver a good pass.”
The Panthers overcame a 17-7 first-half deficit and went ahead for good on C.J. Anderson’s 4-yard run 2:19 into the fourth quarter. Mose Frazier caught a 26-yard touchdown pass from backup Garrett Gilbert, and Elijah Hood sealed the win with a 21-yard TD reception from Taylor Heinicke with 5:05 left.
Stephen Hauschka hit a 26-yard field goal and backup running back Marcus Murphy scored on a 7-yard run in the final minute of the first half.
ALLEN’S DEBUT
One of the biggest cheers went up when Buffalo’s first-round draft pick Josh Allen took over the offense to open the second half. On his first snap, Allen faked a handoff and then showed off his strong arm by sailing a 50-yard pass intended for Robert Foster that just went out of bounds at the left sideline.
Allen finished 9 of 19 for 116 yards, and hit Ray-Ray McCloud III for a 14-yard touchdown with 1:10 left.
Buffalo traded up five spots to select the Wyoming product with the No. 7 pick. Still considered raw, Allen is being brought along slowly and has spent a majority of the offseason working with the third-string offense.
QB WATCH
Panthers: Gilbert went 7 of 12 for 93 yards and a touchdown in four series in the competition to replace Derek Anderson as Newton’s backup. Heinicke went 7 of 9 for 121 yards and a touchdown.
Bills: Peterman, Buffalo’s returning backup, went 9 of 10 for 119 yards and an interception over two drives. Free-agent addition A.J. McCarron went 7 of 10 for 116 yards in two drives to close the first half. Peterman and McCarron have split time with the starters all offseason.
INJURIES
Panthers: S Damian Parms did not return after hurting his shoulder in the second half. CB LaDarius Gunter did not return after being placed in concussion protocol in the third quarter.
Bills: DT John Hughes limped off and did not return midway through the fourth quarter.
NATIONAL ANTHEM
Players on both teams stood for the national anthem.
UP NEXT
Panthers: Host Miami on Aug. 17.
Bills: At Cleveland on Aug. 17.
___
More AP NFL: https://apnews.com/tag/NFLfootball and https://twitter.com/AP_NFL