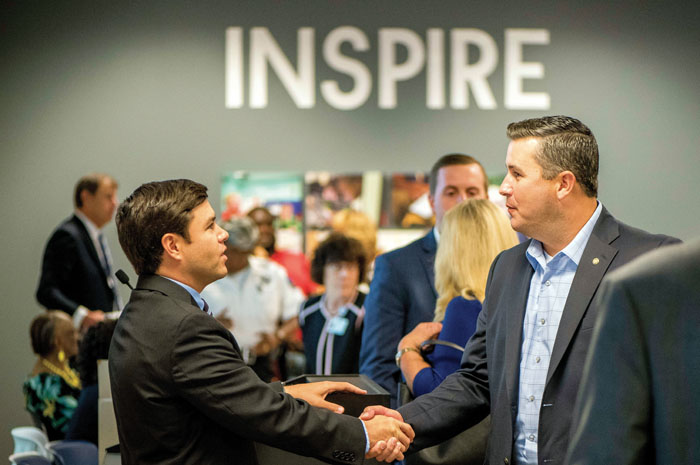 SALISBURY — The road ahead is full of uncertainty for Rowan-Salisbury Schools, but state lawmakers promised Wednesday that they will be behind the district all the way.

District “renewal” means that the schools now have charter-like flexibilities over calendar, staffing, budget and curriculum, among other areas. It is the first and only district in the state to receive this opportunity.

The N.C. General Assembly passed a bill authorizing the change on June 14, and the State Board of Education approved a renewal application Aug. 2.

What lies ahead is a new path and a lot of hard work.

While no extreme or obvious changes are anticipated for the 2018-19 school year, there will be a lot of planning. Moody and other administrators are turning many decisions over to teacher-led teams at each school.

“They are the people who are actually going to do all the hard work and lead us as we become a renewal district,” Moody said.

She applauded the teachers and principals who were ready to throw themselves into the planning process. After the State Board of Education’s approval, many principals became so emotional about the opportunity that they wept, she said.

RSS Board of Education Chairman Josh Wagner said that becoming a renewal district won’t truly be successful unless the district creates a model that works for other districts.

“I’m hopeful that this will lead to greater expansion of flexibilities statewide,” Wagner said.

State legislators also are hoping for the renewal’s success.

“We come to you today with grateful hearts for embarking on this,” Rep. Craig Horn said.

Horn, who represents District 68, chairs the House Education Committee. He said the committee chose Rowan-Salisbury Schools to pilot the renewal program because the district was already pushing boundaries and innovating — even under state restrictions.

“We have great appreciation for what you have done, what you are doing and what you will be doing,” Horn said. “You are truly pioneers, no question about it.”

The decision to approve the renewal is “one of the better things (the General Assembly’s) ever done.” He assured the principals, teachers and local leaders at Wednesday’s breakfast that legislators are behind the district and that they knew failure will be part of the process.

In return, Horn asked that the district “keep Raleigh in the loop” and let its supportrts know what works and what doesn’t. Renewal, Horn said, is the future of education in North Carolina.

“I want Raleigh to get off the back of education and get underneath and start supporting it,” he said. “We can do this, together.”

State Superintendent Johnson echoed Horn’s statements and underlined the fact that the U.S. public education system was designed more than a hundred years ago. While Johnson has pushed for change while in office, the RSS renewal has a chance to redefine education as we know it.

“Don’t let anyone understate what you are doing,” he said Wednesday. “This is a big deal. You have the opportunity to transform the education system.”

While educators and state officials have long known that increased flexibility and access to technology is the right path to take, they needed someone to take the first step. That someone turned out to be Rowan-Salisbury Schools.

“We want you to succeed, and we’ll do everything we can to help,” he said.

“This is a building process. This is new for you,” Warren said. “It will take time to get fruition.”

RSS has a strong community of educators who are networked with each other, as well as community support — something many charter schools don’t have when they get off the ground, Warren said.

Other legislators voiced excitement for opportunities for things like differentiated learning and teaching to mastery, which would allow each child to learn on their level and at their own pace. But most important, there will be change.

“What we’ve heard for years (from schools) is, ‘Please, we need more local control,’” he said.

Ford’s district covers three separate school systems, including Rowan-Salisbury. All of them are run a little differently, he said. If each district is that unique under tight state restricts, Ford said he’d love to see what they’d dream up without them. RSS has that chance, Ford said.

Moody said Wednesday’s kickoff left her with a sense of excitement and pride. It was also comforting to hear that legislators will be behind the district, no matter what.

“They understand there’s going to be bumps in the road, and they’re going to have our backs,” she said.

Wagner left those attending the breakfast with three challenges: To be present, to be patient and to be proud of their district.