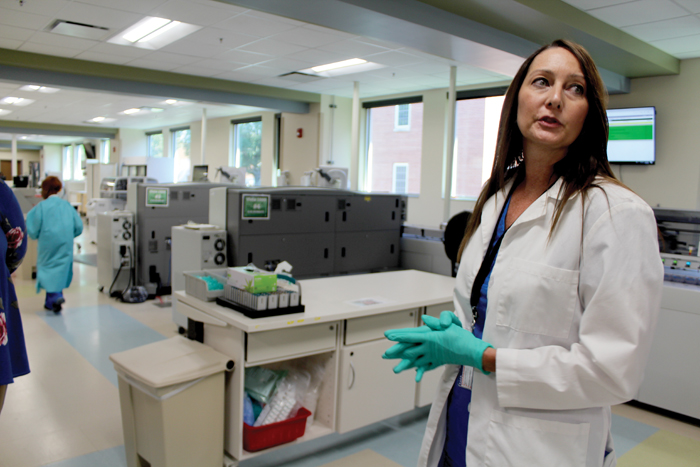 This time, success was marked with the completion of two new state-of-the-art facilities on the hospitals spanning campus: a new clinical laboratory and an intensive care unit.

According to Dr. Georgina Murray, chief of the Pathology Department, the new lab contains areas devoted to chemistry, hematology, urinalysis, blood banking, microbiology and anatomic pathology. She said it was built as a bridge between clinics in Building 3 and the main hospital in Building 2.

Each area of the lab is equipped with a full service of machinery which the hospital leases, paying per test completed.

Staff in the laboratory said the machinery was as good as it gets.

“We have the Cadillac of hematology analyzers,” said anatomic pathology supervisor Amanda Kuykendall,

Joseph Vaughn, director of the Salisbury VA, said the new lab will allow certain tests to be completed within an hour and a half of the specimen being received.

Also impactful, he said, was the new intensive care unit. Previously, the hospital only had five beds in the unit. They were cramped in a small space and separated only by curtains.

Now, the unit has 10 private rooms.

“People in ICU are pretty sick. The privacy alone makes it worth every penny we spend on it,” he said. “Just for the family and the doctor to have privacy … is an enormous benefit.”

The unit added two new providers and four nurses to the hospital staff. Staff will be added as recommended by a nursing staff model for ICU.

The new laboratory centralizes existing staff, though workloads will be monitored and additional resources will be added as needed to support lab function.

DeAnne Seekins, director of the VA’s Mid-Atlantic Health Care Network covering Virginia and North Carolina, said the new facilities are part of why she always enjoyed visiting the area.

“I love when I can get out to the sites visit and just see the progress that Salisbury has made,” she said. “You all have a solid leadership team. … You’re always striving to improve your care to ensure that our veterans have the highest quality care.”