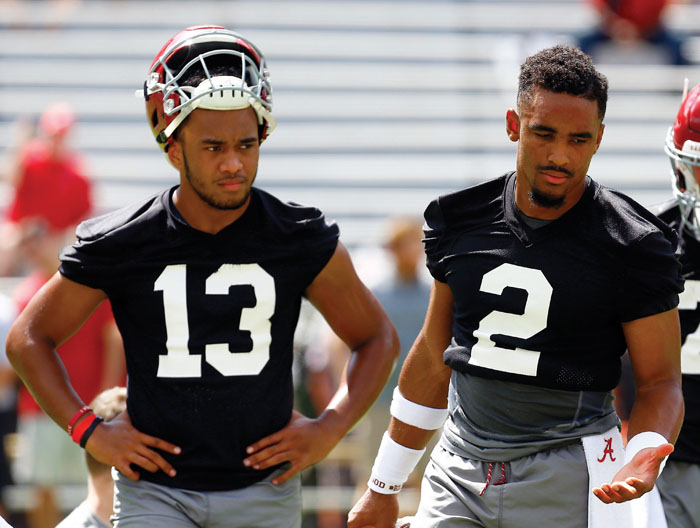 TUSCALOOSA, Ala. (AP) — Alabama coach Nick Saban responded Wednesday to quarterback Jalen Hurts, saying the QB’s recent comments about his treatment by the staff aren’t an issue for the team and won’t have any bearing on the competition for the starting job.

Hurts expressed some disappointment Saturday in the coaches’ communication with him about the quarterback battle between he and Tua Tagovailoa.

Hurts said the staff never “asked how I felt.”

He hadn’t previously been allowed to speak to reporters since the night of the title game and said now “the narrative has already been created.” The comments made national headlines, but Saban downplayed the impact on the Crimson Tide team.

“Every player has a right to express what he feels and what he thinks, and I think he has every right to do that with every coach or anybody in the organization who he has relationships with, which we certainly do quite often with all players at all positions,” Saban said after Wednesday’s practice.

“Look, this is probably a lot more important to people outside this organization than it is to people inside. I don’t think it has any effect on our team. I’ve talked to a lot of our team leaders. The players are focused on what they need to do.”

Hurts is 26-2 as a starter but then-freshman Tagovailoa replaced him in last year’s national championship game and led a second-half rally against Georgia.

Now, Tagovailoa is regarded as the front-runner for the job. Regardless, Saban said Hurts’ comments won’t decide who emerges as the starter.

“The rhetoric will not have anything to do with who’s the quarterback,” the coach said. “That will obviously be decided on the field by how people execute, how they do their job. The same parameters that we’ve talked about before in terms of who wins the team. And winning the team goes along with execution, leadership, players having confidence and belief.

“And that’s not going to change. I don’t really have any more to say about it than that. I don’t think it is anything that has affected our team one way or the other.”