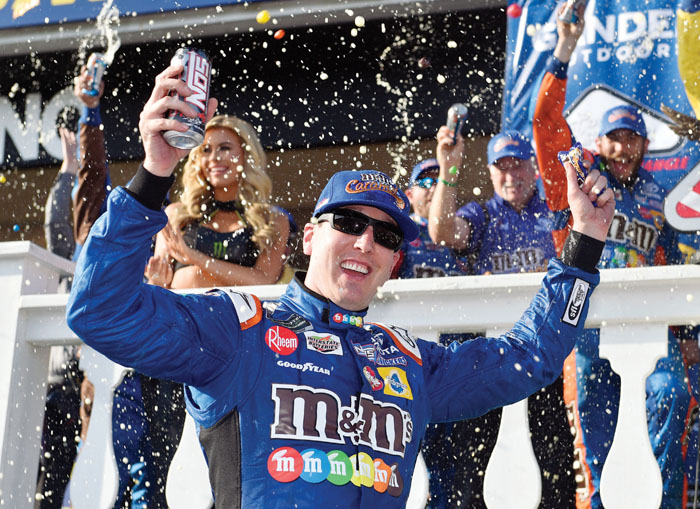 By PETE IACOBELLI, AP Sports Writer
MYRTLE BEACH, S.C. (AP) — Kyle Busch hopes his latest dominant NASCAR season lasts one race longer than his previous two years.
Busch has won 20 races since 2015, including six in the Monster Energy NASCAR Cup Series this year. He’s made the 16-driver playoffs each year and has had a chance to win the title in the season-closing showcase at Homestead-Miami Speedway each of the past three seasons.
But he’s cashed in on just one championship opportunity. That was three years ago, and it’s something that gets under Busch’s skin as the playoffs approach.
“When you only come up with one championship in three times of being there, it kind of makes you a little upset that your odds are going down,” Busch said Tuesday. “So we’ve got to make sure we get back there again this year and win it.”
Busch looks like he’s out to prove he can win everything. He earned his sixth win two weeks back at Pocono to tie Kevin Harvick for most victories this season. Busch was in the thick of things at Watkins Glen last week until an error by his pit crew pushed him to the back of the pack. Still, Busch finished third for his 17th top-five finish in 22 races this year.
Busch said his run this year is a result of good chemistry and a team on a mission to succeed. He won’t let that slip in the final four races of the regular season, which starts Sunday at Michigan International Speedway.
“Our motivation right now is to continue our dominant stretch, continue to finish with top fives, winning races, continue to add bonus points,” he said. “We want to finish the season on top. We want to win the regular season championship.”
Winning is a powerful motivator, as Busch proved at a go-kart track on the Grand Strand to promote Darlington Raceway’s Southern 500 on Sept. 2. He raced contest winners on a three-lap, Watkins Glen-like road course full of chicanes and hair-pin turns.
Busch, always starting on the pole, would drive a few feet before pulling to the side to let the 10 other competitors pass — then methodically chase them down one-by-one until he crossed the finish line first with a large smile on his face.
“I guess I figured out how to run this thing,” Busch joked after one of his five kart wins.
Busch also visited the Palmetto Academy for Learning Motorsports, a charter high school in Conway, South Carolina, with a magnet program dedicated to the skills necessary in racing.
Busch’s lone series title came during a turbulent 2015 when he missed 11 races because of a horrific crash at Daytona in the Xfinity race to start the season. But Busch prevailed through surgeries and a medical waiver to compete for the championship despite his missed races to outlast Harvick at Homestead for the championship.
Busch was loaded with confidence at Homestead the next two seasons — he won four races in 2016 and five last year — he would add to his championship resume. Instead, Busch wound up third two years ago to Jimmie Johnson and runner up in 2017 to Martin Truex Jr .
Busch, 33, understood he was letting too many chances slip by in the prime of his career. So he and his crew, led by chief Adam Stevens, rededicated themselves to consistent excellence in everything they do. So far, it’s worked like few other seasons before.
He’ll try for his seventh win of the season at Michigan this weekend. Busch has never won more than eight races in a season and hopes to eclipse that on the way to the top.
“I think it’s just everything,” Busch said about what had worked best in 2018. “It’s my preparation. I think it’s Adam, it’s his preparation. Obviously, Joe Gibbs Racing building fast Toyota Camrys to take to the race track. Our pit crew’s been there every single week. Everything’s coming together for us.”
___
More AP NASCAR: https://apnews.com/tag/NASCAR and https://twitter.com/AP_Sports