Gruden returning to Coliseum as head coach of Raiders again 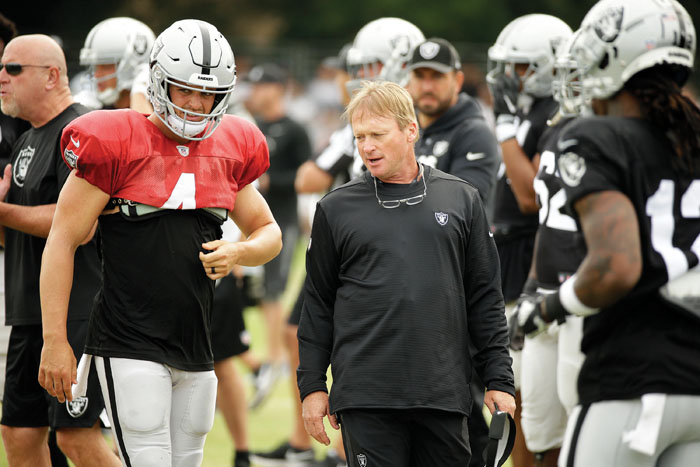 NAPA, Calif. (AP) — As much as he tries to downplay the significance, Oakland Raiders coach Jon Gruden is fully aware Friday’s exhibition game against the Detroit Lions will be anything but an ordinary preseason contest.

It’s been 17 years since Gruden last roamed the sidelines at the Coliseum with the Raiders. He came back in 2004 with Tampa Bay and again in 2012 as a television analyst.

Gruden’s iconic status among Raiders fans promises to make this time different. Much, much different.

Gruden developed a cult-like following during his first stint as the Raiders coach from 1998-2001. Those feelings didn’t wane when Gruden was traded to Tampa Bay by late owner Al Davis and only strengthened when the coach went into the television booth.

Gruden showed his appreciation in 2009 while in town to broadcast a San Francisco 49ers game when he held a party at Ricky’s, a Raiders sports bar not far from the Coliseum.

Gruden held another party at Ricky’s three weeks ago to celebrate his return and paid for dinner and soft drinks for the fans. About 600 people showed up.

“It’s an honor to be here and it’s a great story, but I also just want to do everything I can in order to try and help this team win again,” Gruden said. “I love the Raider fans. I love Oakland and that’s the primary reason I’m standing here.”

Lions coach Matt Patricia developed a friendship with Gruden while he was defensive coordinator in New England and the Raiders coach was working at ESPN.

Gruden’s return, Patricia said, is good for the NFL.

The rest of the storyline around Friday’s game is fairly antiseptic.

Quarterback Derek Carr and the rest of Oakland’s starters will only play a series or two, with the majority of playing time being doled out to the rookies and fringe players on the roster.

“This game is not about Derek Carr, not yet,” Gruden said. “It’s about finding the right 53 men, and I think you saw it today, we’ve got a lot of contenders. There are a lot of guys that have put themselves on the brink of making this football team and we’ve got to make sure we give them every opportunity to showcase their skills.”

Notes: Former Raiders Warren Sapp and James Jones attended practice, along with ex-Lions coach and current NFL Network analyst Steve Mariucci. . LT Donald Penn continues to rehab from offseason foot surgery and is getting closer to getting back on the field. “Our trainer is pleased with the progress that he’s made,” Gruden said. “Hopefully that time is soon.”