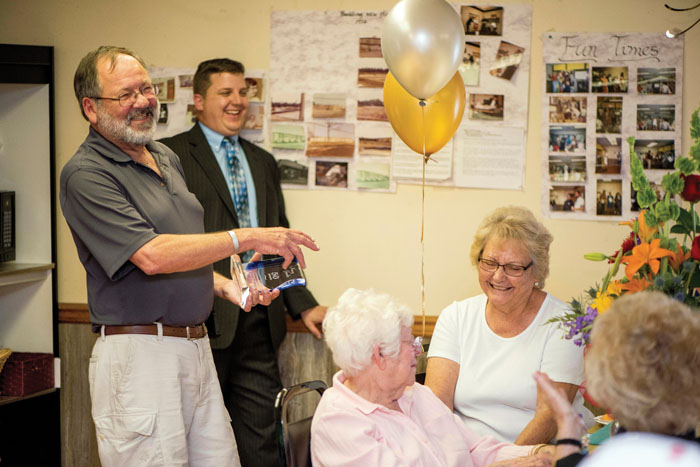 Mike Jones, president of Granite Knitwear, gives a little of the history of his family's textile business during lunch Wednesday. Nancy Jacobs, right, and co-founder Mary Floyd have both been working at the plant for 50 years. Jon C. Lakey/Salisbury Post

GRANITE QUARRY — Balloons and anniversary decorations hang at Granite Knitwear as the small business celebrated 50 years of operation on Wednesday.

Owner Mike Jones thanked the people who helped launched Granite Knitwear with his father, Frank, and the employees, new and old, one-by-one.

“This is a very special day — 50 years,” Jones said. “There’s a lot of people in this room who helped make that happen.”

Nancy Jacobs, who began working for Granite Knitwear on Aug. 20, 1968, has sewn more than 6 million garments.

“Besides the longevity, she’s just a pleasure to work with, very reliable,” Jones said. “With the work out there, she’ll do it. If she’s never done it, she’ll try it. She’s been very pleasant to work with. That’s what it takes for a company like ours to survive.”

Jones presented Jacobs with an award acknowledging her time at the company.

“I’m glad to be able to work this long,” said Jacobs. “It’s been rather pleasant in those 50 years. I’ve had my ups and down, and the company stuck with me. They’ve just been good to me.”

“Back in 1968, if you look back, that was very tough time for this country, probably worse than it is now with the polarization and all that,” he said. “If you remember, that was the Vietnam War. … It was a tough time. I’m not sure why Mom and Dad started it back then, but they did.”

Jones said his mother held the company together after Frank passed away in October 1975.

“She really latched on and did what she had to,” Fisher said. “Frank would have been proud.”

Jones talked about other highs and lows, including the impact the “one-way trade agreement” had on the textile industry in North Carolina. Through it all, Granite Knitwear has stayed in business.

“We are very, very fortunate that we survived that,” Jones said. “We’ve been able to latch onto a niche market.”

After Jones’ remarks, Fisher announced he would pay for the 50th anniversary celebration.

The employees cut a cake and went back to work on an order from TS Designs in Burlington.

Granite Knitwear is at 805 S. Salisbury Ave. in Granite Quarry.

National Night Out brings people together