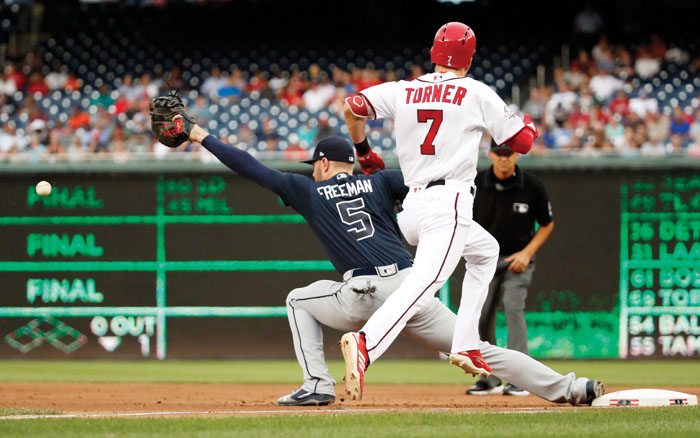 By DAVID GINSBURG, AP Sports Writer
WASHINGTON (AP) — First, Braves right-hander Mike Foltynewicz worked his way out of a precarious jam. A few innings later, Ronald Acuna Jr. lent a high-rising, helping hand at the center-field wall.
Combining clutch pitching, long-ball hitting and Acuna’s deft skill in the outfield, the Braves beat the Washington Nationals 8-3 Wednesday night.
Foltynewicz needed 35 pitches to get out of the first inning. He gave up a double, a single and a walk and another runner reached on a throwing error — yet the Nationals scored only one unearned run and left the bases loaded.
“I knew if I could limit the damage to even two runs there our offense would get some runs back,” Foltynewicz said.
After that, Charlie Culberson hit a three-run homer in the second inning off Tommy Milone (1-1) and Tyler Flowers and Acuna added two-run shots in the fourth.
In the bottom of the fourth, Acuna made a sensational catch to rob Matt Adams of a home run. Acuna raced back to the center-field wall, leaped and snagged the ball with his outstretched glove before sprawling on the warning track. Foltynewicz waved his cap to show his appreciation for the play.
“He’s a very skilled player,” Braves manager Brian Snitker said of Acuna. “He’s got a ways to go. He’s far from being a finished product, but he’s a very talented young man. He’s an exciting player because he’s got skills.”
Atlanta has won eight of 10 to move within a half-game of first-place Philadelphia in the NL East. Washington fell six games back following its second consecutive loss to the Braves.
Bryce Harper hit his 28th home run for the Nationals, who showed their frustration in the sixth inning when rookie Juan Soto and hitting coach Kevin Long were ejected by home plate umpire Greg Gibson. Soto started jawing at Gibson before stepping into the batter’s box, sharing his opinion on a third strike call on his previous at-bat.
“I never think he’s gonna toss me out. I don’t say anything wrong,” Soto contended.
So what did he say?
“That the pitch before was a ball. Make sure he can understand and be better. Help him help us,” Soto said.
Manager Dave Martinez said, “I didn’t think it was appropriate to throw him out in a situation like that, really. He could have said, ‘Hey that’s enough. Let’s get in the box,’ whatever.”
That wasn’t the only thing that angered Martinez.
“We left 10 guys on base,” he lamented. “We got 10 hits, but we couldn’t get that big hit.”
It was 7-2 in the sixth before Harper hit a leadoff homer and Soto was ejected. Washington went on to load the bases with two outs before Luke Jackson replaced Foltynewicz and struck out Adam Eaton .
Foltynewicz (9-7) allowed three runs, one earned, in 5 2/3 innings. He’s 3-2 in five starts against Washington this season.
Culberson has homered in all three games in this series. He has eight home runs this season, five against the Nationals.
TRAINER’S ROOM
Braves: Placed on the DL on Tuesday with a left groin strain, LHP Max Fried doesn’t expect to be out for long. “It’s just a little sore,” he said Wednesday. “For the most part, I’m just trying to get it better to make sure it’s a non-issue going forward.”
Nationals: RHP Kelvin Herrera was placed on the 10-day DL with a rotator cuff impingement, an injury he sustained Tuesday. If all goes well, he can start throwing by the end of next week. … Stephen Strasburg (cervical nerve impingement) and Erick Fedde (shoulder inflammation) threw in the bullpen. “They both threw well, said they felt good,” Martinez said. “The next step for both is to have another bullpen session and go from there.”
WELCOME BACK
With Herrera out, Washington recalled Koda Glover from Triple-A Syracuse. As a rookie last season, Glover notched eight saves in 23 games before rotator cuff tendinitis ended his season in June.
UP NEXT
Braves: Anibel Sanchez (6-3, 2.89 ERA) pitches the series finale Thursday afternoon. He’s 10-1 with a 2.11 ERA lifetime against Washington.
Nationals: Gio Gonzalez (6-8, 4.04 ERA) is 0-6 in his last 11 starts since May 28 and owns a 5-11 career record against the Braves.
___
More AP baseball: https://apnews.com/tag/MLBbaseball and https://twitter.com/AP_Sports

Panthers have a QB battle on their hands —…