This satellite image shows moisture flowing out of the Gulf of Mexico, with the low pressure front in yellow.

The month of July was very hot and dry here in Rowan County. However, by the end of July, weather patterns started to change, bringing us an overabundance of rain.

I will use the image above to explain. The yellow areas show low pressure that developed over the Midwest part of the country. The large blue shaded area indicates moisture being pulled in from the Gulf of Mexico.

This resulted in the formation of a divergence on the East Coast. A divergence at upper levels of the atmosphere causes an upward motion of air and, hence, the potential for thunderstorm development. This allowed for all the showers and storms we experienced during the week of July 29 through Aug. 4.

Last week ended up being the wettest for that same time frame ever recorded here in Rowan County. In 2005, we also received a record amount of rainfall but it was 1.5 inches less than we got last week. We have three more weeks in August, so it may continue to set records for one of the wettest periods in recorded history, but weather patterns show that we may return to dry conditions by the end of the month. 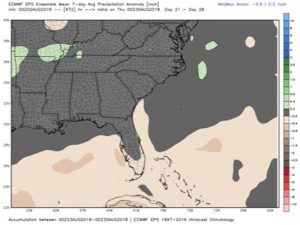 This map shows normal rainfall for the remainder of August in our area.

The image above shows that we are expected to have an average amount of rainfall by August standards for the remainder of the month. On average, we get about 3.5 inches of rainfall in August. We have certainly exceeded that in just the first few days of the month.

From July 29 through Aug. 4, the county went from abnormally dry conditions to a surplus for the year of almost 3.5 inches. If the forecast holds true for the remainder of August, we should end up the month in a good place.