SALISBURY — After an hour of back and forth among City Council members that sometimes became heated, a resolution on the 1906 lynchings of three African-Americans in Salisbury was sent to be discussed further and changed.

The resolution, requested by Mayor Al Heggins, was met with objections from Mayor Pro Tem David Post and council members Karen Alexander and Brian Miller, who cited the lack of time to review the resolution with Heggins, the disregard of process and the language.

“I know I’m going to be accused of being racist,” Post said. “We have a process. We have boards and commissions.”

The three also expressed concern about the historical accuracy of parts of the lynching story.

Councilwoman Tamara Sheffield supported the resolution but agreed to more discussion at a later meeting. She attended a program Monday to learn about the lynchings of the three African-American men on the 112th anniversary.

“These were actions of hate,” Sheffield said. “It happened for both situations. The family was murdered, and three people were (killed) without due process. I don’t know what part of history would keep us from moving forward to do some healing on this, but I’m welcomed to hear what I am missing here or for someone who is an expert to explain why we couldn’t do this. I just don’t know the information. I just don’t see the divisiveness or the the hate.”

The conversation became heated at certain points between Miller and Heggins. Miller told Higgins that the resolution was “politically motivated” and “a sneak attack” because the council received it on Friday.

Telling Miller to lower his voice and breathe, Heggins denied the accusations and said if council members had a problem with the resolution, they could have responded to it or asked for more time to review it.

Susan Lee, who led the information session on the 1906 lynchings, said, “Sometimes the truth is hard to acknowledge.”

The resolution needs to be “direct, clear and not glossed over,” Lee said. 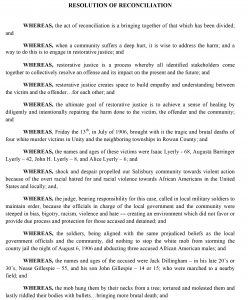 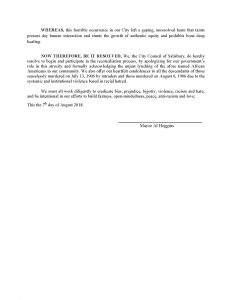 If the council can’t agree on tweaks after conversations with Heggins, the resolution will go to the Faith and Action Justice Committee, the council agreed unanimously.

Rakiyah Reeves of Salisbury also attended the Monday program and spoke about how important the issue is for the community.

“We have to look back in order for us to move forward,” Reeves said. “There’s a correlation between lynching and police brutality, and the fact that I was able to get to a library in Rowan County and participate in that — it was so informative and empowering. I would like to see more things like that here as this city evolves.

“Thank you for that program,” Reeves continued. “My children were present. They were able to see that, so when we think of the future of Rowan County how it evolves we’re talking about hotels and landmarks and strategizing an effort to keep community relationships empowering and positive and healthy for black people, white people, council.”

• Two items related to the redevelopment of the Empire Hotel met with support from the council and the public.

Because of a legal issue, City Attorney Graham Corriher requested the council go into closed session to discuss authorizing the city to enter a master lease for the project and declare the block where the Empire Hotel sits as a landmark.

• The board unanimously agreed to authorize the bid process for the sale of Parcel 018-048 in the 600 block of South Clay Street.

• It also accepted a bid withdrawal from Salcoa Contracting and a bid from Holden Building Co. for the new Fire Station 6.

• Corriher was sworn in as the new city attorney.