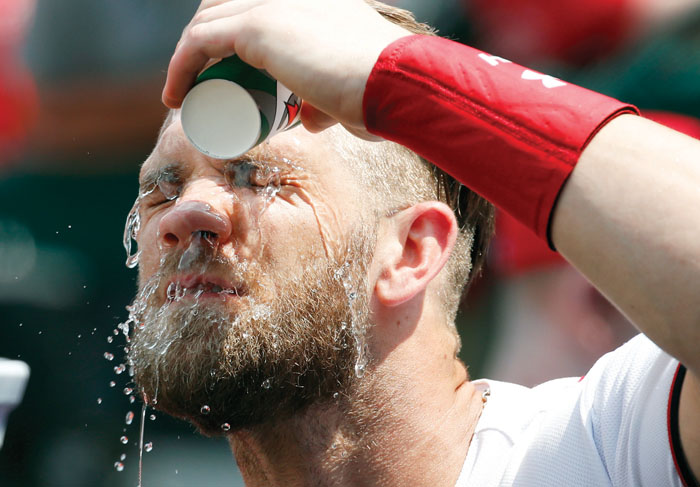 Washington Nationals' Bryce Harper dumps water on his face in the dugout before the first baseball game of a doubleheader against the Atlanta Braves at Nationals Park, Tuesday, Aug. 7, 2018, in Washington. Temperatures were in the 90's at the start of the game. (AP Photo/Alex Brandon)

WASHINGTON (AP) — Not too many teams locked in a pennant race get excited about a doubleheader split.

That wasn’t the case with the Atlanta Braves, who were absolutely delighted after Ender Inciarte snapped a ninth-inning tie with a two-run triple in a 3-1 victory over the Washington Nationals on Tuesday night.

The thing is, the Braves had already lost the opener 8-3 and were going up against three-time Cy Young Award winner Max Scherzer in the latter half of the day-night doubleheader.

Seeking to win his sixth straight start, Scherzer left in a tie game and Atlanta jumped on Washington’s bullpen in the ninth.

“It’s huge for us, splitting today after a tough loss in the first one,” said Charlie Culberson, who homered in each game. “We battled, we stayed in there and Ender came up big for us with that hit in the ninth.”

Freddie Freeman and Nick Markakis singled off Kelvin Herrera (1-2) before Inciarte hit a liner down the first-base line. The ball bounced off a low barrier in foul ground and momentarily eluded Bryce Harper, who had no options by the time he picked it up in right field.

That was the final pitch thrown by Herrera, who left after a visit from Washington’s trainer.

Nationals manager Dave Martinez said Herrera’s right shoulder tightened up him. The closer will have an MRI on Wednesday to determine the extent of the damage.

The defeat ended Washington’s run of nine wins in 12 games. The Nationals are chasing first-place Philadelphia and Atlanta in the NL East.

“Two good teams tonight,” Scherzer said. “Everybody was out there grinding. It just happens that they won. Proud of everybody’s effort. Doubleheader, hot day, this was good baseball.”

Scherzer gave up one run and four hits in seven innings with six strikeouts. He remains unbeaten since July 2.

Sean Newcomb allowed one run and five hits over six sharp innings for the Braves, who have won seven of nine.

The Nationals went up 1-0 in the first inning when 19-year-old Juan Soto homered on an opposite-field drive to left.

Atlanta put runners on the corners with no outs in the fourth before Scherzer deftly worked out of the jam.

But Culberson tied it in the sixth with a drive to left . Four of his seven home runs this season have come against Washington.

Jefry Rodriguez (1-1) allowed one run and three hits in five innings in his first major victory. He also got his first big league hit and scored a run.

Greg Holland, who went 0-2 with a 7.29 ERA with St. Louis, struck out the side during a scoreless seventh inning in his Nationals debut.

Holland, who pitched for Kansas City in the 2014 World Series, was signed Tuesday morning as a free agent.

Harper led off the fourth with his 27th home run, and Zimmerman followed a drive far over the center-field wall for a 2-1 lead. After Rodriguez doubled with two outs, Turner and Soto hit RBI singles.

All the damage came against 20-year-old Kolby Allard (1-1), recalled from the minors to be the 26th man in the doubleheader. Starter Max Fried was struck in the lower back by a line drive in the second inning and removed with a left groin strain.

The win followed the Astros’ 3-1 victory Monday night in which Marwin Gonzalez hit a three-run homer with two outs in the ninth.

The Astros have won six of seven and the Giants have lost four of five.

Joe Smith (4-1) got the win, and Hector Rondon pitched a scoreless ninth for his 13th save.

ST. PETERSBURG, Fla. (AP) — Willy Adames hit a solo homer with two out in the ninth inning, lifting Tampa Bay to the victory.

Sergio Romo (2-2) got the win after retiring two batters in the ninth, helping Tampa Bay break a three-game losing streak.

Moreland hit a three-run homer during a five-run 10th inning, helping the Red Sox overcome Kimbrel’s blown save to beat the Toronto Blue Jays 10-7 on Tuesday night for their fifth straight win.

Boston is the first big league team to reach 80 victories this season.

Moreland’s one-out shot off Ken Giles (0-3) followed a triple by Mookie Betts and a walk by Andrew Benintendi.

Montgomery (4-4), who the Royals drafted in the first round in 2008, picked up his first win since June 29. Montgomery is 3-0 with a 0.40 ERA in four appearances against the Royals.

NEW YORK (AP) — Sal Romano got the win in his New York homecoming, pitching into the seventh inning to lift the Cincinnati Reds over the Mets 6-1 on Tuesday night in a game delayed by rain for 1 hour, 40 minutes in the first inning.

Romano (7-9) was born in Syosset on nearby Long Island and grew up in Southington, Connecticut. He allowed a run, two hits and three walks while striking out five over six-plus innings to help the Reds snap a three-game skid.

The 24-year-old took the mound two hours later than anticipated but with a 3-0 lead thanks to a Reds outburst that bookended a thunderstorm.

Mets starter Jason Vargas allowed hits to three of the four batters he faced, including Scooter Gennett, who laced an RBI single to give Cincinnati the lead shortly before players were waved off the field.

Romano left after walking the first two batters of the seventh and received a warm ovation from a group of fans wearing Reds gear behind the visiting dugout.

Ervin hit a two-run homer in the third, and former Mets prospect Dilson Herrera led off the ninth with a pinch-hit homer.

Vargas (2-8) took the loss after allowing three runs and three hits while recording one out.

A SCARE, AND A NOT-SO-SWEET SHORT START

Before the game was delayed at 7:20 p.m., one rumble of thunder was so loud that Mets shortstop Amed Rosario ducked before darting toward the third base line.

The rain made Vargas’ 240th big league start his shortest. Prior to Tuesday, Vargas’ briefest start was a one-inning outing for the Marlins on Oct. 1, 2005. He is the first Mets starter to record one out or fewer since Jonathon Niese got one out against the Cardinals before exiting due to a knee injury on Aug. 23, 2016.

Reds: 1B Joey Votto (right knee) and OF Preston Tucker (toe) did not play. Votto, who was hit by a pitch by the Nationals’ Ryan Madson, sat for the second time in three games and just the ninth time since the start of the 2015 season. Interim manager Jim Riggleman said a disabled list stint is a possibility for Tucker, who was hit by Noah Syndergaard on Monday.

Mets: OF Jay Bruce (right hip), who has been on the disabled list since June 19, is participating in baseball activities and getting closer to a rehab assignment. … LHP Steven Matz (flexor pronator strain) threw 15 pitches Monday but will miss at least one more start.

Reds: RHP Robert Stephenson (season debut) earned a promotion by going 11-6 with a 2.87 ERA and 135 strikeouts in 113 innings at Triple-A Louisville.