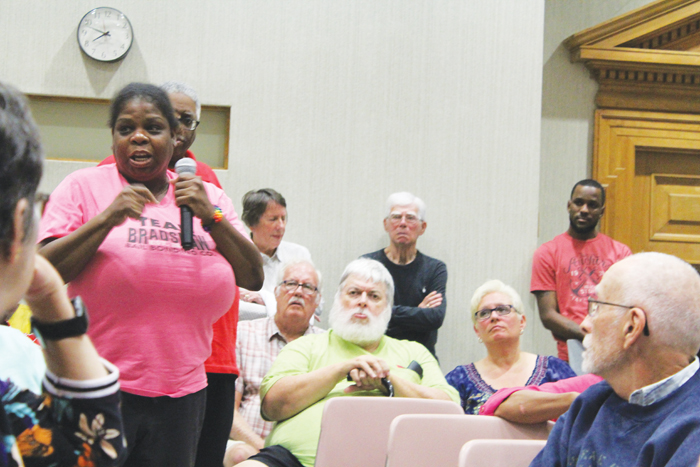 Gwendolyn Roberts answers a question raised by a fellow audience member, explaining the fears experienced by African-American parents for their children as they interact with law enforcement. Andie Foley/Salisbury Post

SALISBURY — Rowan Public Library’s Stanback Auditorium filled to overflowing Monday evening as people gathered to learn about and discuss part of the county’s painful past.

Held on the 112th anniversary of the lynchings of three African-American men, the program was far from an effort to dwell on dark times. Rather, its host, Actions in Faith and Justice, worked to foster an open dialogue that would further community healing and progress.

The Rev. Olen Bruner, committee chairman with Actions in Faith and Justice, explained.

“Our purpose is so that we as a group of people might talk amongst ourselves about how to change the climate that we are living in,” he said.

The crowd watched a screening of the documentary “An Outrage: History of Lynching in American South,” followed by an open discussion. It follows a similar memorial held last year.

Salisbury Mayor Al Heggins preceded the screening with a resolution to name Aug. 6 a “day of remembrance” in the city.

“This horrible occurrence in the city left a gaping, unresolved harm that taints present-day human interaction,” the resolution says. “It stunts the growth of authentic equity and prohibits bone-deep healing.”

The resolution encourages residents to work diligently to eradicate negativity and foster fairness, peace and love.

Susan Lee, committee member with Actions in Faith and Justice, said designating the day of remembrance as a step toward reconciliation hit the mark.

“It calls us to keep taking steps toward reconciliation,” she said. “Our next steps must acknowledge and end present-day social injustice.”

These injustices, as explored by the documentary, are deeply rooted in an American culture of lynching and racial terrorism.

In the film, professor of history Yohuru Williams said that lynching began as a response to crime.

In time, he said, lynching began to be used against African-Americans speaking out in defense of their rights or against disparaging social norms. It became a “useful tool for social control for the white majority,” he said.

The documentary went on to assert that by refusing to talk about the painful history of lynching, affected communities are blind to ways in which history repeats itself.

Isabel Wilkerson, a journalist and author, called recent public and recorded displays of violence against African-Americans a “heartbreaking symmetry of a public attack against people who have been at the lowest caste.”

“As a country, we can’t move forward until we assess how we got to where we are,” she said.

The documentary moved many in the room to tears.

Randy Crowell spoke of his own personal battles. He said an African-American co-worker became frozen in fear with his hands raised when a building alarm was activated. Crowell had found the incident humorous, he said.

“There’s something even worse than hatred. That’s the problem I had,” he said. “I thought (his) life was just like mine. … I’m not laughing anymore. I’m listening. All of us need to listen.”

Others had questions during the open discussion. With law enforcement encouraging policies like “see something, say something,” when should a person reach out to the police?

Gwendolyn Roberts, a mother, said dialogue should be encouraged when applicable, such as in the case of misbehaving children.

“I had to buy my sons state IDs by the time they were 14 because I want the cops to know this is a child,” she said.

But Roberts said her efforts did not protect her boys from prejudice, and they had had meaningless run-ins with law enforcement throughout their lives.

Many in the crowd spoke of a motivation to act in light of the discussion, to find ways to mitigate racial disparities in the city.

Some suggested actions as simple as speaking up when disparaging remarks are heard about people of color. Others encouraged careful consideration when calling law enforcement.

Lee encouraged further involvement with Actions in Faith and Justice, particularly as the group works with the Equal Justice Initiative to place a memorial near the site of the Aug. 6, 1906, hangings.

She also invited people to an Actions in Faith and Justice meeting at 7 p.m. Aug. 20 at Trinity Presbyterian Church, 300 S. Caldwell St., as the group works to foster dialogue and bring about policy changes.

“The Lord’s been good to me”: A Cheerwine employee…