Rowan Legion wrapup: Another stellar season in the books 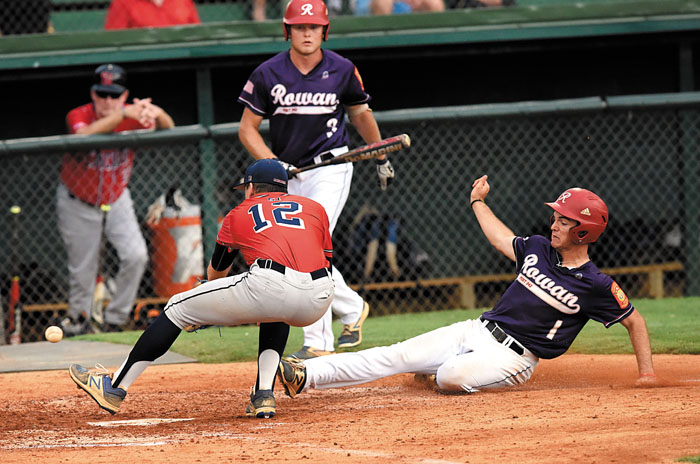 Wayne Hinshaw / for the Salisbury Post Chandler Blackwelder scores on a wild pitch as Concord pitcher Grayson Honeycutt covers the plate during a game on June 26.

SALISBURY  — The Rowan County American Legion baseball season always concludes, not on a diamond, but with a banquet.

That dinner is held not to dole out Team MVP or Most Improved plaques, but to award scholarship money to players already in college or to graduating seniors headed to the college ranks.

To qualify for a scholarship, a player has to be on the team two years. It was a limited list this year with a team built mostly from new faces. Veterans such as John Owen, Trevor Atwood, Hayden Setzer and Chandler Lippard were qualifiers for scholarships. The Legion program contributed $3,000 to their education, with two $1,000 scholarships and two more for $500.

The Post 342 team maintained and added to a proud tradition this summer, with a 33-12 record. Rowan has won at least 30 games four straight seasons and has qualified for the state tournament all four years. Rowan won Area III this season for the first time since 2015. Rowan still hasn’t had a losing season since 1989.

Among other things, this Post 342 team brought the home run back to Newman Park, with 29 blasts, including seven each by Setzer and Lippard. That’s the most for the program since 2010 when a slugging team accounted for 41.

Rowan’s homer production peaked in 2009 with the “Fargo” World Series team that crushed 66 longballs, including 16 by Trey Holmes, 11 by Zach Smith and 10 by Corbin Shive.

As bats were modified, power production sank to an all-time low in 2012 with just five homers. That 2012 team had to fight to go 20-20, barely keeping alive that long string of non-losing seasons.

Owen etched his name among the all-time mound greats for Rowan. While he played four Legion summers, he really only had two seasons as a full-time pitcher. He was mostly a catcher in the summer of 2015 when he went 3-0. He also pitched very limited innings in 2017 because of arm fatigue and went 2-0. But this year he was an ace from start to finish with a 9-1 record and 76 strikeouts.

The right-hander goes into the books at 20-3, a mark which compares with just about everyone who has ever pitched for Salisbury/Rowan Legion except Tommy Eaton, who is in a league of his own. Eaton struck out 419 batters in the mid-1950s. He blew away more than 200 batters for Salisbury’s 1955 World Series team, winning 15 times and saving seven more.

Next weekend’s inductees into the Salisbury-Rowan Hall of Fame will induct current Rowan (and Catawba College) coach Jim Gantt, as well as Cal Hayes Jr., the all-time leaders in hits, runs and steals for Rowan Legion.

Gantt will be the fourth Rowan Legion coach to enter the local hall. With all that tradition, it’s not easy to carve out a place on the all-time Legion record book, but Atwood and Lippard managed to do it.

Atwood had 94 career RBIs to rank 25th on the all-time list. Lippard also is on that list with 83 RBIs and will still have Legion eligibility next summer. Only 18 players have driven in 100 runs for Rowan Legion. Lippard would certainly reach that milestone if he returns. The most recent player to accomplish the feat was Lee Poteat, who finished his career in 2017 with 110 RBIs.

Lippard also is on the all-time list with 10 career homers — that’s the bottom of the list — and with another season he also could climb high on the doubles chart.

Lippard had 51 RBIs this season — in 45 games — to make the all-time list for a single season. That was just one RBI fewer than Poteat had when he was Area III Player of the Year in 2016, so Lippard may be a viable candidate for that honor when it’s announced next spring.

Setzer, who will be a Catawba freshman, led Rowan in batting this year, soaring to .369 with a late surge. He was 7-for-17 in the Area III championship series and followed it up with a 6-for-10 effort in the state tournament. He hit .565 in those final, pressure-packed weeks.

It’s unusual for a catcher to lead the program in runs scored but Atwood got on base frequently and did that this season with 42. He also led in hits with 48 and was second to Lippard with 40 RBIs.

A young player to keep an eye on as far as the future records list is Wayne Mize. A rising junior at East Rowan, Mize missed the first three games of the Legion summer with a hip injury, but he hit .344 with 34 RBIs, 12 doubles and five homers. He had the biggest single game of the season when he socked two three-run homers, plus a double, in one game in the Area III championship series at Randolph County.

Luke Barringer had the most memorable swing of the season with a walk-off homer to turn around that series with Randolph, a struggle which contained enough drama for a whole season.

There were brilliant starting pitching performances from Owen, Setzer and Daniel Durham, but the most memorable victory of the summer had to be the one by Maddux Holshouser at 1 a.m. in Game 5 of the Randolph series.

Randolph is the host for the Southeast Regional tournament which begins at McCrary Park tomorrow.

Rowan won’t be there, except maybe to cheer for their Randolph friends, but this was another season for everyone to feel good about.