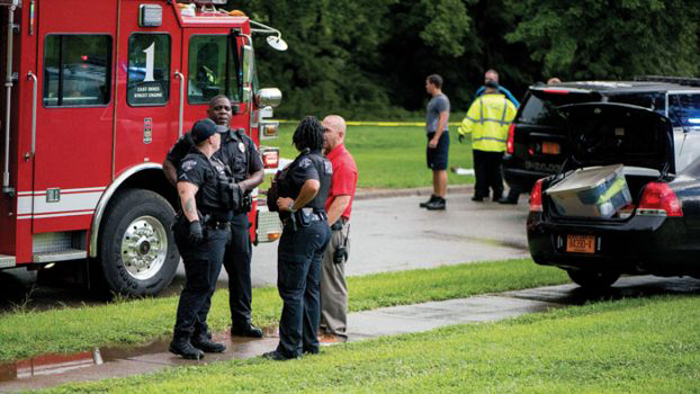 SALISBURY — Police investigators have released few details about the deaths of two people who were shot at a local park Friday evening.

A large number of people were having a cookout at the park, but police say the man and woman killed were not part of that group.

The Salisbury Police Department identified the victims as Sabrina Annette Pinkston Curzi, 40, and Darryl Allen Wright, 34, both of Salisbury. Police said the shooting occurred during what appeared to be a picnic at a gazebo at Town Creek Park. Reports said three men left the scene after the shooting in a dark, midsized car.

Investigators released the names and photos of three men of interest. This weekend, two of them were arrested but not charged with murder.

According to arrest warrants filed in the Rowan County Magistrate’s Office, the felony common law robbery and assault charges against Black and Powers are in connection with the theft of a $100 cellphone and the beating of a man at the park.

The warrant says Black and Powers hit the man — whom the Post is not naming — about the head and shoulders with glass bottles and punched and kicked him repeatedly around the torso.

Salisbury police officials said Monday that Curzi and Wright were not at the picnic Friday. Police have not provided further details, but investigators say the crime was not random.

Angela Corriher, a friend of Sabrina Curzi, said Curzi was “truly amazing.” She said Curzi’s children were her life.

“The world lost a truly amazing soul that day in what I think was a senseless act of violence. So unnecessary. I am terribly saddened by the loss of my friend, and my heart breaks for her family as well as all of her friends and the people who never had the chance to meet her,” Corriher said.

Another friend said she and Curzi were had known each other since they were 12 and echoed Corriher’s sentiments that Curzi’s children were “her life, and she lived for them.”

Anyone with information on the whereabouts of Willie Earl Williams Jr. is asked to contact the Salisbury Police Department at 704-638-5333 or Salisbury-Rowan CrimeStoppers at 866-639-5245.