“The Lord’s been good to me”: A Cheerwine employee celebrates 50 years 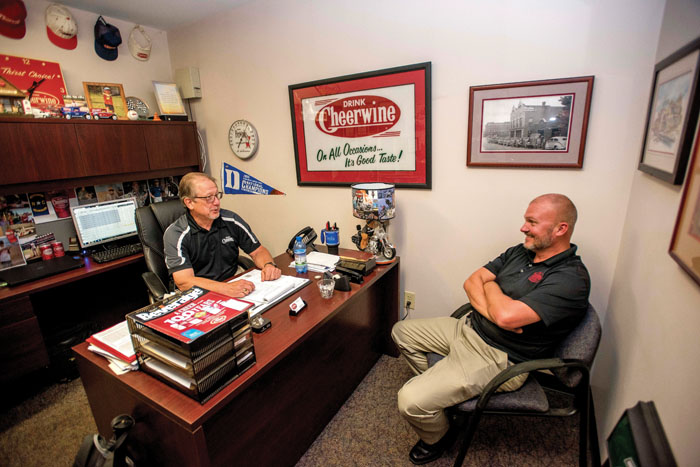 The glass case in Ray Kepley’s office hearkens back to his start at Cheerwine 50 years ago. The worn cap and faded sales pad belonged to the fellow who brought him on board in 1968 as a route assistant.

“A.D. Barbee was a family friend,” he remembers. “He asked if I’d be his helper and I agreed. I worked for him two summers in high school.”

Kepley smiles as he remembers the heavy work. “He’d walk inside and do the sales. I’d load the cases, take them inside. I’d gather the returnable bottles and load them back on the truck. Ah, he worked me to death.”

Years later when Barbee passed away, his wife came to Kepley’s office with a small brown paper bag. Inside was A.D.’s cap.

After graduating from high school, Cheerwine was the natural place to go. Raymond Ritchie, father of current CEO Cliff Ritchie, was production manager at the time. He asked Kepley if he wanted to work in production. Thinking of his workload under Barbee, he hastily agreed.

Kepley worked on the production line for about a year. He laughs now at how antiquated the system was, compared to the current super-fast bottling system in Charlotte.

“We loaded dirty bottles in the soaker, ran them through the line, turned on the filler, cased them and unloaded cases off the line. We probably did 60 bottles in a minute; now the bottling company does it in a blur.”

Bottling was a step up from route assistant, but Ray is more of an outdoors guy. When the chance came to have his own route, he jumped at it. “We’d take a truckload for the day and sell as much as you could. That’s how you got paid, by commission.”

As bigger routes came available, he took them. “I met my wife Sharon on the route. Evidently we had a connection. We’ve been married 40 years.”

He didn’t call right after meeting her. A few months later, he called their mutual friend and got her number. Their first date? The Cheerwine Christmas party.

“We had a lot in common. She rode horses. I had horses. We both played softball. We just kind of hit it off.”

About a year after marrying, Ray was promoted to route supervisor. He was responsible for four salesmen and their routes. “We were just getting started, and it was a ‘little bump’ for me, and a lot more responsibility.”

Following his stint as route supervisor, he moved up to sales manager. Today he serves as general manager, reporting directly to CEO Cliff Ritchie.

Never having worked anywhere else, Cheerwine feels like home to him. As he changed roles, “It felt like you’re going from one family to another. My management team probably has 160 years combined service.”

The Cheerwine culture is truly a family culture. “It’s great,” he says. “There are bad times, surely, but we are family. Cliff is very down-to-earth. His door is open and I can go talk to him. Any employee can. I worked for his grandfather, C.A. Peeler, and it’s always been that way. We’ve always referred to ourselves as family.

“If anyone’s family member dies, we take a meal and support them. We know everyone’s kids, knew when they were born. We really all grew up together.”

Many things have changed over 50 years. Today’s salesmen use apps on their mobile phones. Kepley, by contrast, had a sales pad.

“My daughter was always amazed how I could add. I could add a column of figures before she could get them in a calculator. That’s what we had to do. X amount of cases at so many dollars, you’d memorize it. I don’t think I ever carried a calculator on the route. I’ve gotten a little soft in my older days — I do use a calculator now.”

In the old days, Cheerwine was largely a summertime drink and summer was the only busy time. Today, thanks to all the marketing, it’s busy all year with an emphasis on summer.

“It’s amazing to me the people who take to this product. The amount of stuff we send out of here, from online, it’s amazing. It’s a really big deal. At both festivals we had a merchandise tent and people were backed up. It’s like a cult following!”

He says the best day ever was the 100th anniversary celebration in downtown Salisbury. “There were 30,000 people! The energy was felt everywhere. People were lined up at the museum all day long to see the display. Lined up around the block — to go see the history of Cheerwine. Unreal how people want to be involved.”

He says it’s personal to him as he has watched it grow day-by-day for 50 years.

The thing Kepley remembers the most is the variety of people he met on the routes and friends he made over the years. Today, store managers who have retired sometimes stop by his office to say hello.

Kepley appreciates two mentors over his 50 years. The first is Raymond Ritchie. After retiring, he would come back often to talk with Kepley. “He was the oldest tenured employee before he passed away. I called him ‘No. 1,’ and he called me ‘No. 2.’” He shakes his head. “It was a bad day when he passed away.”

His second mentor is current CEO Cliff Ritchie. “Cliff’s always been a go-to guy. I’ve learned a lot from him. We’ve always had to do things together.”

Kepley says he got his work ethic from his dad. The senior Kepley was a mechanic at Foil Motors for 45 years, and farmed on the side. “He always said, ‘Do what you say you’re going to do.’”

Ritchie speaks highly of Kepley. “Ray has been a cornerstone of our operation in Salisbury for a long time. Ray has a wealth of knowledge about our industry and a street smarts that is hard to replace. He is also very trustworthy, dependable and always does what he says. Ray has also built a great team of employees that all work together as the Cheerwine family. Ray has strong values, ethics, and morals, and is a fine Christian man. We are fortunate to have Ray here at Cheerwine Bottling Company.”

Kepley declines to comment on retirement. “I will retire one day,” he says, “But I’m not giving a date yet.”

Butterfly royalty: Monarchs take to the sky at Hurley…