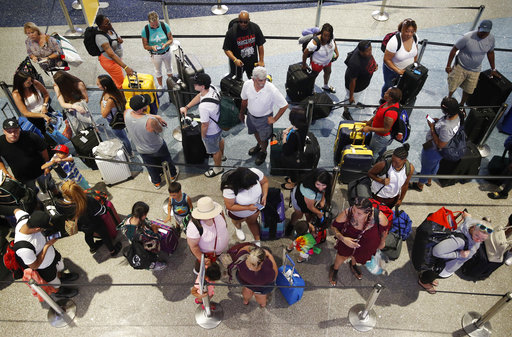 People wait in line to check in at McCarran International Airport, Friday, June 29, 2018, in Las Vegas. The TSA projected that Friday could be its busiest day ever, with agents screening more than 2.7 million people. (AP Photo/John Locher)

SINCE 9/11, American travelers have put up with long queues and occasionally invasive searches at airport security checkpoints in exchange for an expectation of safety in the air. A new plan, reportedly among a number of cost-cutting measures being considered by the Transportation Security Administration, could alter this equation. It would eliminate checkpoints at more than 150 small and medium-sized airports across the country — and put millions of Americans at additional risk each year.

On Aug. 1, CNN reported that TSA officials were considering slashing security at smaller airports serving aircraft with 60 or fewer seats. The plan would have passengers from smaller airports screened when they arrive at larger hubs for connecting flights rather than at the initial point of travel. The costs saved — approximately $115 million annually — could then be used to strengthen security at major airports.

Official documents obtained by CNN argue that cutting security at these airports would cause only a “small (non-zero) undesirable increase in risk related to additional adversary opportunity.” Even a small risk increase would be ill-advised, but critics have warned that the heightened risk could be much larger than suggested. The plan could give potential terrorists openings to target smaller aircraft or use them to destroy buildings.

Terrorists have flown under the radar at smaller airports before: Two of the 9/11 hijackers began their trip that day from Portland, Maine. If this plan were rolled out, what would stop terrorists or potential attackers from flocking to the airports at which security has been slashed?

TSA officials should have conversations about how to use their resources more efficiently, but this particular idea should not go any further. The agency performs a vital service that would be undermined if it no longer screened passengers at all U.S. airports.