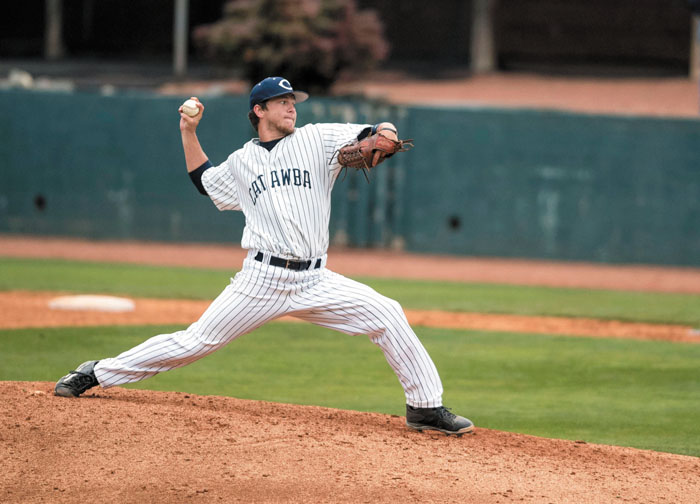 Catawba doesn’t often lose juniors to the draft, but Almond, who combines a brawny bat with a powerful arm, and Blanton, who is fearless and throws in the 90s, were special Division II players.

Signed by the Arizona Diamondbacks after the 2017 draft, Almond is crushing the Pioneer League this summer. He’s tied for the league lead in homers (9), tied for fourth in RBIs (37) and seventh in batting average (.336).

Meanwhile, Blanton, a New York Yankees farmhand, is wearing pinstripes in Pulaski, Va., an advanced rookie league. He’s learning every day as he makes the transition from college fireballer to crafty pro.

Blanton, who came to Catawba after a stellar, three-sport career at Albemarle High, was picked in the 21st round in 2017 and signed quickly. The Yankees offered $50,000.

“Sure, I would love to have played my senior year at Catawba, would have loved playing with all the guys another year,” Blanton said. “But I got a little money signing as a junior, and I wouldn’t have gotten anything like that if I’d waited until my senior year. I’ve been able to start paying back student loans and I’m a lot further along now, with this being in my second pro season, instead of my first. Signing was the best decision for me.”

Blanton was automatic as the closer whenever Gantt made calls to the bullpen. In his three Catawba seasons, Blanton was 6-3 with 25 saves. He struck out 116 batters in 84 innings. There wasn’t a lot of mystery to Blanton. He wanted the ball with the game on the line, and he came in firing bullets. He had a quality breaking pitch, but he could just blow most D-II hitters away with velocity.

After he signed and reported to a Yankees’ rookie team in the Gulf Coast League last summer, Blanton shocked everyone by being even more successful than he’d been in college. He was lights-out from the start. In 16 relief appearances, he posted five saves and allowed just one earned run. The really startling stat was that he struck out 19 batters in 16 innings, while walking zero.

“I’d kind of struggled a little bit late in my career at Catawba, but as soon as I got to Florida and threw my first bullpen, everything clicked, and I didn’t miss a spot,” Blanton said. “I made up my mind that I wasn’t going to walk anyone. If a count went to 3-and-1, I threw the ball down the middle and took my chances. And it was pretty easy not to walk people in that league. The hitters were aggressive, young kids. If they saw a fastball on those first two pitches, they were swinging.”

Back in early April, he’d hoped to open the 2018 season with the Class A Charleston RiverDogs in the full-season South Atlantic League, but the Yankees weren’t convinced he was ready to make that jump. He was retained in extended Spring Training until the short-season Appalachian League got started in June. That’s when he reported back to Pulaski.

“I was in good shape when I went to Spring Training this year, but I really wasn’t game-ready,”  Blanton said. ” My pitches weren’t quite sharp enough, but I’ll learn from it. Next year, I’ll be game-ready when I report.”

The months in extended Spring Training were boring. There were lots of workouts, intrasquad games and practices, but there were no crowds and no one was keeping score.

“The biggest thing I did in those months in extended Spring Training was work on my slider,” Blanton said. “I was throwing a slider that was 80-81 mph and a curve that was 77-79, and over time, they had morphed into being very similar pitches. Now my slider is 84-to-86 mph. So there’s more difference with the curve. That’s worked well for me.”

Blanton, 22, also throws a changeup. He works on it every time he throws a bullpen, but it’s still his fourth-best pitch. He doesn’t use it a lot. Not yet.

There are advantages and disadvantages to being part of the Yankees farm system.

The Yankees are a win-at-all-costs organization that will trade prospects, even potential stars, for veterans who can help them win now at the major league level. So a player such as Blanton, as much as he’d love to pitch in Yankee Stadium some day, realizes there’s a better than 50-50 chance that he’ll be swapped to another organization at some point. It’s more likely that his opportunity is going to come with someone other than the Yankees.

“They make that clear to us from the start,” Blanton said. “They tell us every time we get to pitch, we aren’t just pitching for the Yankees, we’re auditioning for the other 29 clubs. Every time we pitch, it’s a chance to show other clubs what we can do.”

The Yankees are exceptional at identifying talent in the draft and developing that talent.

“Every pitching coach I’ve worked with really knows what he’s doing,” Blanton said. “The Yankees do a great job with the draft, and there’s just unbelievable talent stockpiled in this organization. There are two guys on my team (including mega-prospect Luis Medina, a 19-year-old from the Dominican Republic) who can throw 100. There are a bunch of other guys throwing mid-90s.”

Most of Pulaski’s pitchers, catches and coaches are Latins, so the semesters of Spanish that Blanton took at Albemarle High and Catawba come in handy. Communication isn’t an obstacle.

There are 17 pitchers on the packed Pulaski roster, but Blanton has been able to carve out a role in the bullpen because he can get loose faster than anyone else.

“When one of our pitchers gets in trouble in a hurry, I’m the guy they usually call on,” Blanton said. “I can throw two pitches in the bullpen, and I’m warmed up, so that’s been my role.”

He’s experienced his ups and downs this season. These are pros, not college players, and mistakes — thigh-high or waist-high pitches or pitches that get too much of the plate — are hit hard.

“At this level, those mistakes aren’t turned into homers like they would be in the majors,” Blanton said. “But they are base hits.”

Blanton’s strongest stats have been his strikeout and control numbers. He’s fanned 15 in 14 innings, while walking three.

Blanton’s record is 0-3 this summer, but that’s because he’s been on the wrong side of a new rule that’s being employed in all the minor leagues this season. If a game goes to extra innings, that next inning starts with a runner already standing at second base. Officially, it’s scored as if the runner reached second base via an error. That means the pitcher isn’t charged with an earned run, but that pitcher can still be tagged quickly with a loss if he gives up a single — or maybe a groundout and a sacrifice fly. Blanton was in a hole, with an 0-2 record, after he’d thrown just 23 pitches this summer.

Despite the ill luck in extra innings, Blanton is confident he’s making progress.

“I know I’m a better pitcher than I was last year,” Blanton said. “My composure is better, and I’m better at executing all of my pitches. At Catawba, I was coming in and throwing as hard as I could. Now I’m mixing it up more, working both sides of the plate, changing pitch sequences.”

In other words, he’s making that evolution from thrower to pitcher.

Blanton is enjoying the environment in which he’s working. He plays home games in a very old ballpark. Calfee Park was built in 1935, but it was renovated and upgraded in 2015.

Pulaski is a small town in the mountains, pleasantly cool for this time of year and mostly dry. The Pulaski Yankees haven’t been rained out a single time all summer.

The team plays virtually every day (only four scheduled off days), but the road journeys are short and scenic. The longest trip has been three hours.

The best thing about being in Pulaski is Blanton is just two hours away from Catawba and two-and-a half hours from home. When he gets an off day, he comes back.

“I’m enjoying pro baseball, with no regrets,” Blanton said. “Every year is critical as far as my development, and I’m glad I signed when I did.”