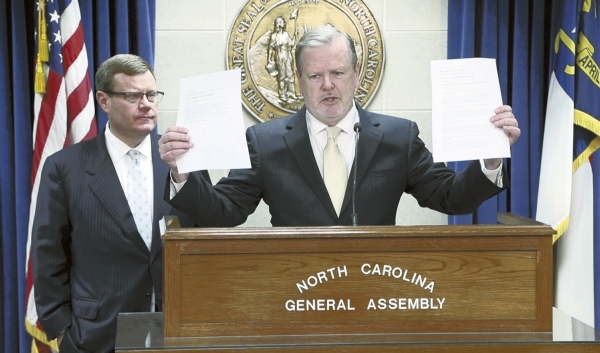 RALEIGH — We’re about three months away from this year’s elections, so who’s winning in the polls?

Sorry folks, there are no polls to share with you. North Carolina’s only statewide races this year are judicial. And while there’s been some polling in a couple congressional races, don’t expect pollsters to tell you who’s likely to win the legislature. It would be nearly impossible to accurately measure candidates’ support in 170 different House and Senate districts.

But that won’t stop me from reading the tea leaves. Second-quarter fundraising reports, which show us how much money each candidate had as of June 30, provide the best data available so far.

It’s not exactly a perfect barometer. In an off-year election, turnout will have a big effect on the outcome. And we don’t yet know what political action committees and dark money groups will do to boost their preferred candidates.

So with that caveat, here are the four conclusions I’ve drawn from looking through fundraising numbers:

The GOP’s House supermajority is in danger: If raising more money than your opponent was the sole factor in winning, Democrats would flip at least seven competitive House seats currently held by Republicans, while the GOP would pick up two House seats currently held by Democrats. Democrats need a net gain of at least four seats to break Republicans’ veto-proof majority, a power shift that would give Gov. Roy Cooper more influence over policy.

But that shift is a far cry from winning an outright majority, which is difficult in heavily gerrymandered districts. And by the same metric, Democrats would fall short of breaking the supermajority in the Senate. If a fundraising advantage determined the outcome there, five Republican-held seats would flip to Democrats, while the GOP would hold onto its other seats — meaning Democrats wouldn’t flip the six seats they needed to end the supermajority.

Republicans are playing defense: The GOP is nearly at its high-water mark in the legislature, thanks to districts they drew in their favor as well as several strong election cycles. In a perfect election for Republicans, they could flip just a few more seats held by Democrats.

Instead though, Republicans are focusing their fundraising resources on vulnerable incumbents. Incumbent Democrats who represent competitive districts appear to be getting a free pass so far, with limited GOP money being raised to unseat lawmakers like Sen. Don Davis of Greene County and Rep. John Ager of Buncombe County. Republicans are starting from scratch in their bid to defeat Rep. Ken Goodman, D-Richmond, after their original candidate dropped out.

Little money has been raised so far to unseat Sen. Danny Britt, R-Robeson, Rep. William Brisson, R-Bladen, and Rep. Brenden Jones, R-Columbus. And Democrats also lag in fundraising in two districts that now lean slightly toward their party — the House seats left open by the retirements of Rep. Jeff Collins, R-Nash, and Rep. Larry Bell, D-Sampson. But it’s not all bad news for Democrats in rural areas: Their candidates lead in fundraising in three House districts and two Senate districts held by Republicans.

Legislative leaders control GOP purse strings: The N.C. Democratic Party is sitting on a war chest of $5.8 million to help its candidates, while the N.C. Republican Party only has $1.3 million on hand. Much of the GOP’s cash sits in the campaign accounts of House Speaker Tim Moore ($1.2 million) and Senate leader Phil Berger ($1.6 million).

That means Berger and Moore will have to decide how much to give fellow Republican candidates, and how much they’ll keep to fend off their own challengers. That has the potential to cause squabbling within their party.