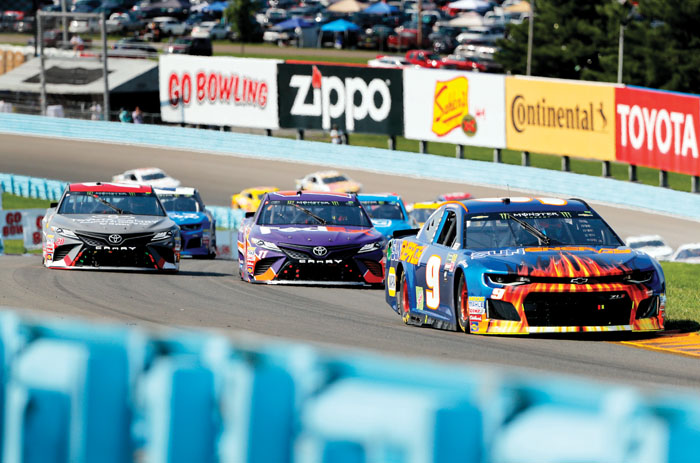 Mired in a confounding losing streak since the start of his NASCAR Cup career in 2016, Chase Elliott finally broke into the win column Sunday, holding off road course ace Martin Truex Jr. at Watkins Glen.

The son of Hall of Famer Bill Elliott, who also won his first Cup race on a road course (Riverside in 1983 in his 124th start), Chase celebrated a triumph he will cherish forever. Out of fuel after the finish, he was pushed to victory lane by the banged-up No. 48 Chevy of seven-time Cup champion Jimmie Johnson, a teammate and one of his staunchest supporters, as his father raced to join the celebration after spotting.

Toss in the raucous cheers of the sellout crowd and it doesn’t get much better than that.

“It’s something I’ll never forget,” said Elliott, who has finished second eight times in Cup. “I was going to do a burnout, but I ran out of gas. Certainly glad that we were on the front end today.”

Elliott’s victory came in his 99th Cup start and was the 250th win for Hendrick Motorsports, breaking a 37-race losing streak for one of NASCAR’s signature teams. It also assured Elliott a spot in the playoffs as he became only the fifth driver to win a race outside of the “Big 3” of Kyle Busch, Kevin Harvick and Truex, who have combined to win 16 of 22 races.

Truex ran second to Elliott for most of the final stage and began to steadily close as both drivers tried to save enough gas to reach the end of the 90-lap race. It was a two-car breakaway as the rest of the field was more than 11 seconds back.

Truex closed to the back bumper of Elliott’s No. 9 Chevy as his car bobbled slightly out of the first turn on the final lap around the 2.45-mile natural terrain layout. But Truex’s No. 78 Toyota skidded, Elliott regrouped and pulled away and Truex sputtered home, out of fuel.

“I just tried all I could to chase him down, and I got there with plenty of time,” Truex said. “It’s just every time I’d start putting together some good corners and get close enough to him to even think about making a move, I’d get sideways behind him. He did a good job of putting his car exactly where it needed to be and not making a mistake.”

The race promised to turn into a fuel mileage race as the laps wound down, and nobody has been better with the strategy than Truex and crew chief Cole Pearn. All three of Truex’s road course wins were won with strategy, including last year at The Glen and this year at Sonoma in California’s wine country.

“You feel satisfied,” Elliott said. “It’s a huge deal. It has not been an easy year. We were getting closer, closer, closer and finally got it done.”

Elliott won the race’s second stage and brought the crowd to its feet with a pass of Busch. Elliott pulled out to a half-second lead while Truex was fighting to get back to the front after a restart mired him in 12th.

Midway through the segment, the Big 3 were running in the top 10, but Elliott dominated and beat Busch by 1.3 seconds.

Busch’s day was ruined when Matt DiBenedetto brought out a caution just past the midpoint of the race. The fuel probe malfunctioned on the ensuing pit stop and the crew only got a few gallons into the No. 18 Toyota. That forced him to pit again, dropping him out of contention after dominating the opening segment.

“Every year we come here, we have a fast car and fail to execute, whether that’s just called bad luck or whatever,” Busch said. “Last year we had a lug nut get stuck in the caliper, this year we had fueling problems. It never ceases to amaze me.”

Other things to know about the Cup race at Watkins Glen on Sunday:

Paul Menard was dealt a blow to his playoff chances before the race even started when his No. 21 Ford failed inspection Sunday morning and he was sent to the rear of the 37-car field. Menard entered the race tied for 16th in points with Ricky Stenhouse Jr., who started 23rd. Stenhouse finished 16th, 12 spots ahead of Menard, and leads him by 10 points. The top 16 drivers make the 10-race playoffs, which start in mid-September, and only four races remain in the regular season.

Come one, come all

Watkins Glen International announced that reserved grandstand tickets for the race sold out for the fourth consecutive year.