Butterfly royalty: Monarchs take to the sky at Hurley Park 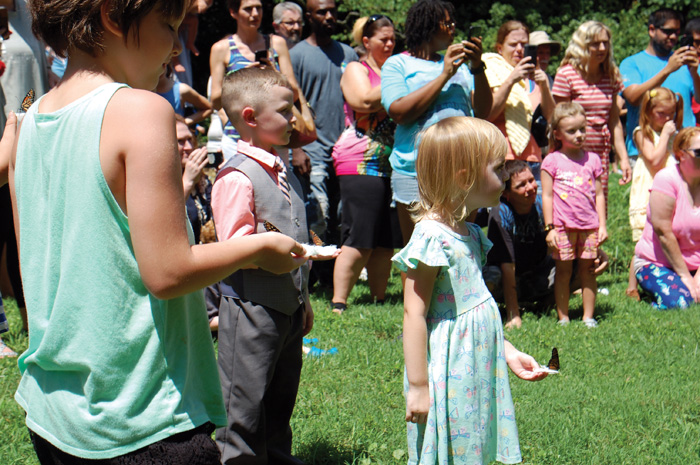 Mark Wineka/Salisbury Post Holding a monarch butterfly herself, 3-year-old Autumn Thompson, right, counts down with others on the release of many more monarchs Sunday afternoon at Elizabeth Holmes Hurley Park.At left, closest to the camera, Maddlyn Huneycutt, 8, also holds a monarch.

SALISBURY — Hurley Park is usually a quiet place for taking strolls and appreciating the diversity of native flowers, grasses, shrubs and trees.

But Sunday afternoon Hurley Park was anything but low-key as a large crowd filled with children dropped in to hear a program on monarch butterflies, see them up close and later witness the release of many monarchs into the park itself.

Not that anyone was complaining. Park board members were thrilled with the turnout for this second annual event.

Nora Aker, co-owner of All-A-Flutter Farms in High Point, pulled  a number of props out of her bags and drafted many children volunteers for her educational program on monarchs.

Nora and her husband, Brandon, raise 10,000 to 15,000 monarchs a season, and that season in North Carolina lasts from April to October when the temperatures can expected to be 60 degrees and above.

The Akers sell their monarchs to businesses and individuals for occasions such as weddings, funerals, birthdays, grand openings and graduations, with releases often used to signify celebrations or new beginnings.

The Hurley Park crowd watched from bridges, stone walls, the main gazebo and under shade trees, if they didn’t bring lawn chairs and blankets. Packets of milkweed seeds and park brochures were being given out for free.

Monarchs will lay their eggs only on the leaves of milkweed plants, and Garden Greenhouses of Salisbury donated some plants as well.

Aker said monarchs are just shy of being considered an endangered species in North Carolina because of the growing scarcity of milkweed, which her farm also raises and sells.

Monarchs are the size of a human eyelash when they are born, but in two weeks they grow about 10,000 times their original size. They eat, grow and shed skin before climbing to the highest spot on a plant, attaching themselves upside down and forming a chrysalis.

Over time, the chrysalis turns colors from bright lime green to black to clear before the monarch emerges. It takes about two hours for the monarch to pump its wings before they are dry enough for flight.

The whole process — from eggs to chrysalis to butterfly — takes about 30 days. As a butterfly, the monarch has a lifespan of only about two weeks. It spends its time eating and laying 200 to 600 new eggs.

Monarchs also are the only butterflies in North America to migrate. In fall, certain monarchs will not lay eggs but migrate instead to Mexico. These migrating monarchs can live up to six months.

Aker said monarchs like colors such as purple, white, yellow and red. They also are attracted to people with red and blond hair, and even hair spray.

Aker showed the children how to tell the difference between a male monarch (two dots on the wings) and females (no dots), and she also went into the differences between butterflies and moths.

Monarchs use their knees for hearing, have a long tongue and compound eyes made of 12,000 tiny eyes, Aker said.

Before the final monarch release in an open meadow near the gazebo, Aker gave out plant prizes for correct answers to her questions and allowed some of the children to hand-feed monarchs, which they were able to hold for a long time.

Two suspects in custody, one still at large in…