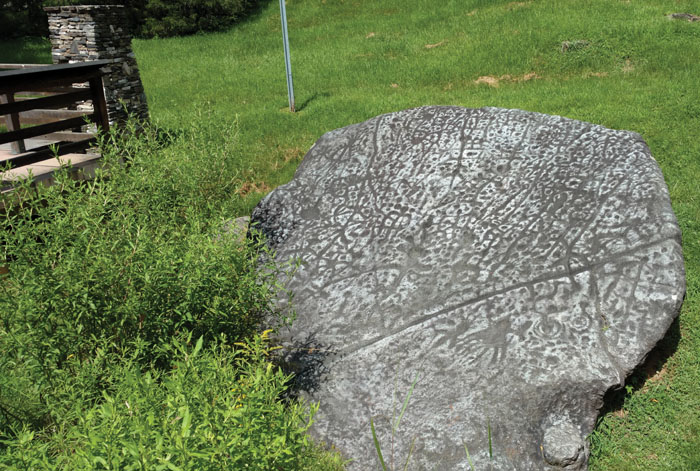 Mark Wineka/Salisbury Post The Judacullah Rock represents sort of a way-off-the-road attraction in Jackson County. Historians, archaeologists and Cherokee cultural specialists have tried to figure out for years what story the strange symbols try to convey.

SYLVA — I don’t know how it happened, or how it even started. So I will blame my wife.

There I was driving south on N.C. 107 toward Cullowhee with a smart phone’s GPS voice periodically giving me directions to Judacullah Rock.

Our Greensboro friends Steve and Michelle were in the car with us. Most every summer, we meet in Asheville for a couple days just to catch up on life.

We mostly tend to eat, drink, walk and browse, but on this particular day we decided to leave Asheville and travel down the highway to the modest mountain town of Sylva.

We no doubt did the normal Sylva things. We stopped at the Victorian house which serves as an attractive Jackson County visitors center. We walked the many steps from the street up to the old Jackson County Courthouse.

From its perch atop a ridge, this has to be one of the more picturesque courthouses in the United States, except that today it’s a public library. As reward for climbing the steps to the top, you turn around and drink in most of Sylva.

Main Street stretches toward a distant mountain, and the cloud formations sort of take your breath away, at least they did for us.

We later walked the length of Main Street downtown and stopped at The Coffee Shop for lunch.

Steve and I had “The Grizz,” the establishment’s signature hamburger, and I think my wife, Lindsay, ordered good ol’ country steak and gravy.

Steve and Michelle almost came to blows later when they tried to share a piece of homemade coconut pie.

A stop at Innovation Brewing followed, and we also took a photograph of Michelle standing in front of the colorful mural that says, creatively, “Sylva,” before we returned to the car and headed out of town.

I thought I mentioned my wishes to head toward Cullowhee or Waynesville — places I hate to admit I had never ventured into — when I realized we were on a mission to find Judacullah Rock.

Here’s where I blame Lindsay, who back at the visitors center in Sylva had picked up a brochure about the rock, which supposedly is covered in Cherokee petroglyphs.

These are the kinds of things that call to Lindsay, who believes in the old mountain saying, “When life gives you scraps, make a quilt.”

The GPS seemed to know where Judacullah Rock was, and I waved at Cullowhee and Western Carolina University as we passed it on N.C. 107.

On our way through the countryside, we took bets on how many other people we would find at Judacullah Rock. Lindsay said eight. Steve said four. I felt pretty good with my prediction of zero — who else would be doing this in the middle of a weekday afternoon?

After a while, in a beautiful valley setting, we turned left onto Judaculla Rock Road. We traveled about a half-mile and reached a dead end, marked by a private drive. We saw no signs of a big rock.

Nearby, an empty SUV with Florida plates was parked on the roadside. Lindsay then spied a guy halfway up the private lane who was hitching his pickup to a trailer. She immediately drafted herself to talk with him while I turned the car around and parked behind the Florida vehicle.

“I guess you get asked all the time where Judacullah Rock is,” Lindsay said as introduction.

Turns out he did. We had driven right past the rock, he explained, because someone had taken down the good sign pointing to where it was. Sure enough, just as we were retracing our route on foot, a family of four walks up from a path we should have seen earlier.

So Steve won our bet, and the father of this Florida clan told us that once we reached the rock, we all had to jump up and down four times and shout “Wooga-wooga.”

The trail to Judacullah Rock was a short one and the rock itself — a bit more modest in size than I expected — had a deck built around three sides. No touching or climbing on the rock is allowed.

The Milas Parker family apparently uncovered the soapstone generations ago, and since then historians, archaeologists and experts on Cherokee culture have debated at length on what the rock’s fading symbols represent.

Some say the rock is a star chart, a battle commemoration, a peace treaty, hunting songs or cures for illnesses. But the most popular theory sees the rock as documenting the myth of Tsul’kalu, the Cherokee word for Judacullah, which Lindsay’s brochure said means “slanted eyes.”

Judaculla the giant lived in the mountains above the Sacred Valley. His father was thunder; his mother, a comet. The bow he carried was the arc of heaven, and his arrows were bolts of lightning.

The Cherokee legend said that when Judaculla heard trespassers in the valley, he leapt down from the mountain and onto the soapstone, leaving his imprints.

If you’re counting on me to tell you what the symbols on Judacullah Rock really mean, you’re driving your chickens to the wrong market — another thing mountain folk might say.

Lindsay and Michelle jumped up and down and said “Wooga-wooga” before we left and headed for Waynesville. There we stopped at the Boojum Brewing Co., named for a 9-foot-tall creature said to be Bigfoot mixed with a mountain man.

Again, I blame my wife.