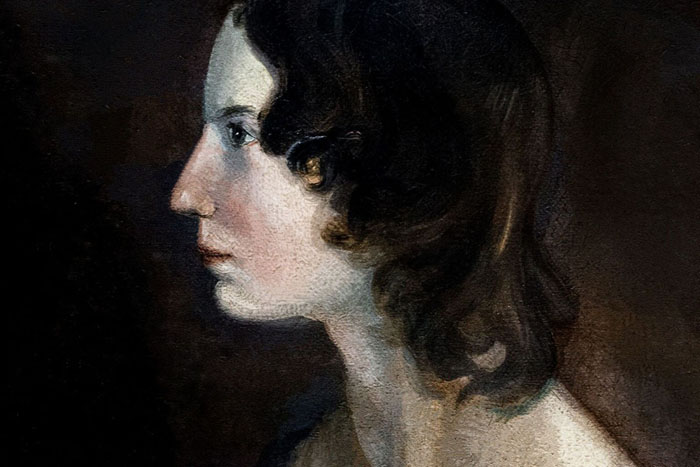 Even the light of 200 birthday candles couldn’t pierce the gloom of “Wuthering Heights.” But the fire that burned within Emily Brontë roars across the centuries.

How remarkable that on the bicentennial of her birth, this reclusive woman should still be crying at our window like Catherine, “Let me in — let me in! I’m come home!”

The younger sister of Charlotte, Emily was born on July 30, 1818, in Yorkshire, England, to Maria Branwell, who died just a few years later, and Patrick Brontë, a parish priest. Together with her three surviving siblings, Emily stoked a furnace of creativity unique in the annals of literary history. The children wrote fantastical stories together, spinning imaginary worlds of romantic and military adventure.

Only poetic remnants of that juvenilia survive today, but during their brief lives, each of the Brontë sisters managed to publish at least one novel, and none of them generates more cultish devotion than “Wuthering Heights.” Yes, Charlotte’s “Jane Eyre” may have more readers, but the tale of young Catherine and Heathcliff, the mysterious bad boy who is really bad, remains the most feverish love story in English literature.

Given that blaze of fury and passion, filmmakers have been drawn to Brontë’s bleak moors as inexorably (and disastrously) as Catherine is attracted to Heathcliff. Everyone from Laurence Olivier to Timothy Dalton to Ralph Fiennes has taken a stab at “that devil.” In 2015, the Lifetime network set “Wuthering High School” in Malibu, which is not so much an adaptation as a desecration. Perhaps the plot is simply too static and vast to capture on screen, which may be why Kate Bush’s otherworldly single “Wuthering Heights” (1978) remains the best homage.

The book’s fame was hardly preordained. Published in 1847 under the masculine pseudonym Ellis Bell, “Wuthering Heights” struck its first readers as “a perfect misanthropist’s heaven.” Early reviewers called it “strange,” “disagreeable,” “baffling,” “disjointed” and even “inexpressibly painful.” All true, but they made that sound like a bad thing. One reviewer was particularly distressed by the novel’s dismal gloominess. “Never was there a period in our history,” he concluded, “when we English could so ill afford to dispense with sunshine,” which sounds like he was that guy who walks up to women and says, “Come on, girl: Give us a smile!”

For sure, Emily was not prone to giddiness. But despite the extraordinary fame of her single novel, she remains obscured by fog, which only makes her more attractive for our own projected fantasies of savage romantic abandon. She was, reportedly, shy and private. A family member claimed she rarely left the house except for church or to walk alone. Our impression of her is further clouded by Charlotte’s heavy-handed efforts to tidy up her little sister’s reputation after she died in 1848. In a perplexing preface to the second edition of “Wuthering Heights,” Charlotte praised the novel — “We seem at times to breathe lightning” — while also questioning the wisdom of creating a character like Heathcliff. She went on to suggest that Emily was not a talented artist so much as a natural genius, “a native and nursling of the moors” who worked “in a wild workshop, with simple tools, out of homely materials.” It’s a surprisingly chauvinistic argument, and factually untrue, given Emily’s wide reading of Romantic literature — in English and German. At the peak of her sisterly betrayal, Charlotte wrote, “Having formed these beings, she did not know what she had done.”

In fact, we do not know what Emily has done.

Long after “Wuthering Heights” should look rusted by time and softened by familiarity, it remains an extravagantly turbulent novel. As a teenager, I found the story, with its nested narrators and tangled family tree, baffling and dull. Rereading it this month, though, I was dazzled by its preternatural modernity. The way the characters resist any moral explanation, the way the style flickers between gothic romanticism and flinty realism, and the way the incestuous plot festers past all endurance on that claustrophobic moor — it’s shockingly daring. Charlotte didn’t have the nerve to leave her little Jane Eyre in the red-room for more than a few hours, but “Wuthering Heights” reads as though Catherine never came out.

The novelist Kate Mosse is one of many luminaries celebrating Emily’s bicentennial with the Brontë Parsonage Museum in Haworth. She writes via email, “There is no apology within ‘Wuthering Heights,’ no attempt to make the story palatable or the characters likable or domestic, but instead it has an unashamed sense of its own purpose, its own self.”

Emily, after all, is the woman who wrote, “No coward soul is mine / No trembler in the world’s storm-troubled sphere.” And the characters she created are just as fearless, just as audacious in their disregard for what is expected, what is reasonable, what makes sense. Their relentless pettiness, their meanness, their physical and emotional abuse, including knife-throwing and dog-hanging — I don’t deny the repulsiveness of any of that behavior; the story would make an effective Human Resources PowerPoint presentation on Disruptive Behavior Procedures. But romantic tragedy is cathartic, not instructive. The wonder of “Wuthering Heights” is its exponential emotions: “such anguish in the gush of grief!”

We know Catherine is doomed and Heathcliff is “a fierce, pitiless, wolfish man,” but how subversive, how bewitching such unbridled passion feels in our self-conscious age of transactional hookups and enlightened unions. No dating app would ever bring these two lovers together; no marriage algorithm would ever predict a happy future. And yet . … “He’s more myself than I am,” Catherine cries. “Whatever our souls are made of, his and mine are the same.”

Such romantic fusion is a catastrophe that irradiates the realm of Wuthering Heights and leaves a blast area that should warn others away, but who can resist approaching that crater of heartache and feeling the heat that comes off these pages?

Farewell then, all that love

All that deep sympathy;

Sleep on, Heaven laughs above –