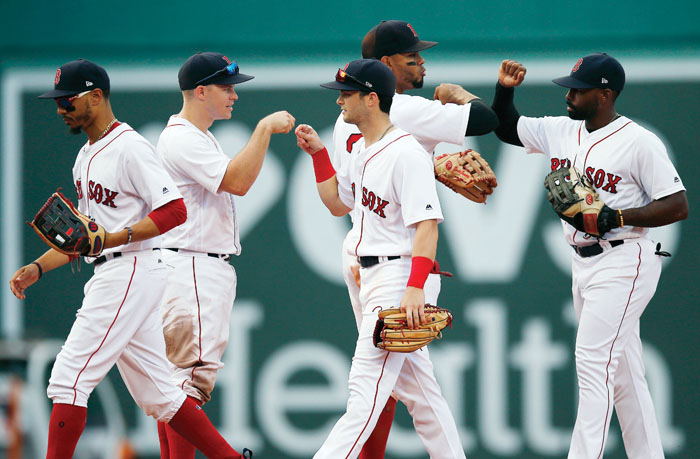 BOSTON (AP) — The Red Sox fan who brought a broom to Fenway Park to cheer Boston on to a sweep of the rival Yankees will have to wait one more day.

Still, he was lucky to have it on Saturday, using it to retrieve J.D. Martinez’s home run ball from the light stanchion above the Green Monster.

“It’s been a lot of fun pitching with these guys behind me,” said Nathan Eovaldi, who pitched eight scoreless innings to help the Red Sox beat New York for the third game in a row and expand their lead in the AL East to season-high 8½ games with a 4-1 victory.

“We’ve been able to score runs early in the ballgame, which makes it a little easier pitching,” said Eovaldi, who has pitched 15 shutout innings for Boston since he was acquired from Tampa Bay last month. “And the defense is amazing.”

Mitch Moreland started in place of hot-hitting Steve Pearce and hit a homer of his own, and Martinez hit his major league-leading 33rd of the year for the Red Sox, who go for a four-game sweep on Sunday night with David Price scheduled to face Masahiro Tanaka.

“This is a huge series for us,” said Eovaldi (5-4), who pitched eight innings of three-hit ball, striking out four and walking one.

“We’re going to be playing these guys a couple more times down the road. For us to take the first three games in the series is big,” he said. “Price is building off his last start, so hopefully we’re going to be able to take advantage.”

One night after Rick Porcello threw an 86-pitch, one-hit complete game, Eovaldi started with three no-hit innings and left after eight with a 4-0 lead. Closer Craig Kimbrel held on through a shaky ninth inning to send the Yankees to their season-high fourth straight loss.

“There’s no question that they’ve established themselves right now as the best team in this league,” New York manager Aaron Boone said. “That said, if you walk through our room right now, to a man, we know we can absolutely play with them. We know that when we’re at our best we can beat them. We acknowledge who they are right now. There’s no denying the season that they’re having.”

Down to their last strike against Kimbrel, the Yankees made it 4-1 on back-to-back doubles by Giancarlo Stanton and Didi Gregorius. A pair of walks loaded the bases before Greg Bird hit a routine fly for the final out.

The Yankees are missing Aaron Judge and Gary Sanchez, and they had to shuffle their rotation when J.A. Happ contracted hand, foot and mouth disease just as Sonny Gray was sent to the bullpen because of ineffectiveness.

Chance Adams was called up from Triple-A for his big league debut and took the loss despite allowing just three hits — two of them homers — for three runs. He walked one and struck out two in five innings.

“I was just trying to control the nerves and stuff,” he said.

After the game, there was a report that Los Angeles Angels manager Mike Scioscia is expected to step down at the end of this season. The report by Ken Rosenthal of The Athletic cited unidentified major league sources.

The 59-year-old Scioscia is the longest-tenured manager in the majors and has guided the Angels since 2000. They are 55-57 this year.

Kluber (14-6) matched zeros for five innings with Felix Pena (1-3), who carried a no-hitter into the sixth inning before Martin led off with a homer. Martin has two homers in three games since coming to Cleveland in a trade with Detroit.

Rookie second baseman Jeff McNeil went 4 for 4, and Austin Jackson had an RBI infield single as the Mets halted a four-game skid.

Pitching against his hometown team, Wheeler (6-6) matched a season high with nine strikeouts over seven innings of three-hit ball and extended his shutout streak to 17 innings.

Bobby Wahl and Robert Gsellman finished the five-hitter, with Gsellman getting four fast outs (all on grounders to McNeil) for his sixth save.

Gausman (5-9), acquired from Baltimore before the non-waiver trade deadline, was charged with three runs and six hits over five-plus innings.

WASHINGTON (AP) — Nationals slugger Bryce Harper was forced to leave soon after being hit by a pitch, then Cincinnati Reds star Joey Votto went wild when he got drilled in a testy second game won by Washington.

Harper was hit in the right kneecap in the sixth by a pitch from Austin Brice. Harper initially struggled to put any weight on his leg, but made his way to first base.

But Harper labored defensively chasing after a double in the seventh and was immediately replaced in right field by Adam Eaton — Harper said he’s not sure if he’ll be able to play Sunday.

In the eighth, Votto was hit for the second time in the game and gestured at pitch Ryan Madson as he took first base. After being retired on a forceout at second to end the inning, Votto waved at Washington’s dugout, prompting plate umpire Andy Fletcher to warn both teams.

The Nationals scored single runs in each of the opening five innings against Matt Harvey (5-7).

Jeremy Hellickson (5-2) pitched into the sixth. The Nationals have won four of five.

Cesar Hernandez, Nick Williams and Asdrubal Cabrera also went deep for the Phillies, who won their fourth straight to move 1½ games ahead of Atlanta for first place in the NL East.

Justin Bour and Miguel Rojas homered for Miami, which has dropped five in a row.

Eflin (8-3) gave up four hits with six strikeouts and no walks to reverse his recent fortunes.

Jason Heyward added three hits and an RBI for the NL Central leaders.

The Chicago bullpen backed Hendricks with 3 1/3 hitless innings. Steve Cishek and Brandon Kintzler combined to retire seven straight batters, and Pedro Strop worked a 1-2-3 ninth for his seventh save.

Austin Hedges homered for the second straight day for the Padres.

Gyorko hit a pair of doubles, including a tiebreaking one in the fifth inning. Wong was activated before the game after being out since July 22 with left knee inflammation.

Matt Carpenter doubled and tied a career high with his 28th home run, a solo shot in the ninth off Dovydas Neverauskas. Jose Martinez doubled twice and Harrison Bader also had two of the Cardinals’ 14 hits.

MILWAUKEE (AP) — Travis Shaw hit a grand slam during Milwaukee’s six-run first inning. The Brewers won for the fourth time in six games stayed one back of NL Central-leading Chicago.

Rookie Freddy Peralta (5-2) pitched six effective innings in his second win over Colorado this season. Trevor Story hit a pair of two-run homers for the Rockies, who have dropped five of six.

Tyler Anderson (6-4) was tagged for seven runs and seven hits in four innings. Colorado loaded the bases with one out in the ninth, but Joakim Soria struck out pinch-hitter Tom Murphy swinging and Josh Hader got Charlie Blackmon to pop out for his eighth save.

Eddie Rosario and Logan Morrison also homered for the Twins. Kepler went 3 for 3 with a walk and scored two runs.

Berrios (11-8) had trouble throwing strikes in his middle innings and allowed the Royals to take a 2-1 lead after walking the bases loaded in the third.

The Twins regained the lead on Kepler’s homer off Burch Smith (1-3) in the fourth.

Anderson led off the ninth with a double off Yonny Chirinos (0-4). Garcia then bunted a 0-2 pitch and Duffy threw wildly toward first.

Xavier Cedeno (2-0) got the last out of the eighth for the win, and Thyago Vieira pitched the ninth for his first major league save.

Ahmed had a run-scoring single in the first, a two-run homer in the fifth and a solo shot in the eighth.

Edwin Jackson (3-2) pitched into the seventh inning, allowing an unearned run on five hits. Jackson struck out three and walked one to win back-to-back starts for the first time this season.

Chapman and Davis homered in a three-pitch span in the third off starter Jordan Zimmermann (4-4).

Gallo’s 29th homer of the season put the Rangers up 2-0 against Baltimore starter Dylan Bundy (7-10).

Minor (8-6) went seven innings for the first time in six starts, throwing 63 of his 86 pitches for strikes. The lefty struck out six without a walk while allowing one run and four hits.

Jose Leclerc, the expected closer after Keone Kela was traded to Pittsburgh earlier this week, worked a perfect ninth for his first save in five chances.

Prep Football: Numbers are much improved for Carson Cougars