In it for life: Faithful Friends Animal Sanctuary and its unique method 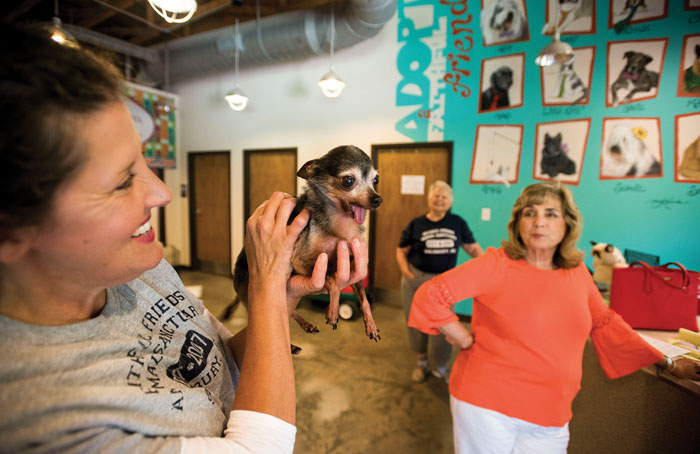 JON C. LAKEY / SALISBURY POST Director Mary Padavick (left) holds Boo Boo, who is missing a lower jaw. Faithful Friends Animal Sanctuary in Salisbury has several pets that are difficult to adopt out because of their special care needs. The needs range from overweightness, hyper active, toothless, elderly and even one dog missing a lower jaw. Many of these animals will most likely live out their lives at the santuary. The rest will take extra diligent owner to be adopted. on 7/31/18 at in Salisbury, NC,.

In the lobby of Faithful Friends Animal Sanctuary, Booboo the teacup Chihuahua roams with nose to the ground and tongue exposed on a quest for the errant crumb.

Of course, the small dog has limited options in terms of expression: a past of neglect and an untreated tooth infection claimed one half of his lower jaw.

Booboo is now healthy and cared for at Faithful Friends, and he’s one of many sanctuary animals with unique needs and stories searching for their forever home.

In the Chihuahua’s case, needs include baby food and minced dishes that he can swallow without chewing.

Other potential adoptees have their own needs and commitments. There’s “K.C.,” or King Cat, who suffers diabetes and has his insulin regulated through his own special diet. Lizzie, a ‘Shinese’ or Shih Tzu and Pekingese mix, requires near constant activity due to high energy and a passion for games of fetch.

Medical needs and high-strung personalities can each be cause for animals to struggle finding forever homes, said sanctuary director Mary Padavick. Adoptions may fall through, or they may be at risk for euthanasia in other institutions.

Not so with Faithful Friends. Board members explained: each adoption goes through a careful screening process to match the right animal to a family or individual. And the sanctuary does not euthanize pets that go unadopted.

“We have made a commitment to the life of an animal,” said Nancy Karapf, president of the sanctuary’s board of directors. “If we bring an animal in, we will take it back if the adoption doesn’t work. That happens very rarely because we screen adoptees.”

The screening process involves a meet-and-greet with the family and, where applicable, other household pets.

Faithful Friends staff takes time to get to know those seeking a new ‘furever’ friend, Karapf said, with talks that allow them to play matchmaker.

“We don’t really do a lot of kennel walking,” she said. “Once the staff gets to know a person, then they pull some dogs that sound like they go with that family’s interests.”

But Karapf said this more thorough process and a lifetime commitment to each animal does raise a certain challenge.

The sanctuary’s creation and upkeep

It is located on a 10.75-acre site on Grace Church Road, a donation secured by the sanctuary’s founder Anne Ingram.

Ingram passed away last year following a battle with cancer.

“She was the woman who had the vision for this entire place,” Padavick said, facing a picture of Ingram in the shelter’s lobby. “She really believed in her heart and mind that every animal should be treated respectfully.”

The sanctuary came to fruition through Ingram’s resolve, said Padavick, calling the founder an inspiration to all Faithful Friends’ staff, board members and volunteers.

Recalling clearing the land where the sanctuary would eventually be built, Padavick described Ingram as the voice of reason when the dream for the shelter seemed forever away.

“She said, ‘listen, if this were easy, somebody would have done it a long time ago,'” said Padavick. “Eight years later, that still resonates with me.”

The sanctuary’s upkeep remains far from effortless, Padavick said. Caring for the animals can get expensive with individual health needs, and the shelter sees that each animal is spayed or neutered before adoption through a sponsoring veterinarian.

Fortunately, a team and community effort see that day-to-day operations run smoothly as possible, said the director. With only two full-time employees and one part-timer, volunteers complete a majority of work around the shelter.

This includes everything from walking dogs, sweeping free-roaming cat suites, and tending to laundry to weed-eating and mowing the ten-plus acre grounds.

It’s an all-hands-on-deck sort of situation.

“Any time I’ve ever had a meeting out here for any reason with Mary, she’s multitasking. She’s constantly moving, cleaning, sweeping, mopping,” said board member Peggy Mills. “It takes every body. It takes a big concentrated effort.”

The effort is particularly large in light of meeting guidelines and standards for state licensing, said board president Karapf.

Bernie Tompkins, who volunteers with in the cat wings twice each week, said she was drawn to Faithful Friends over more traditional shelters because she knew “the animals don’t have an expiration date here.”

These bills, staff salaries and other operational costs are made possible through donations, private grant funding and a series of fundraisers throughout the year.

This year, fundraisers include a Sep. 29 “Fun Run” sponsored by The Forum for “four-footed and two-footed creatures,” said Mills.

Ongoing fundraising efforts include aluminum can recycling, another team volunteer effort wherein collection bins for cans are placed at sites by request.

Linda Shapleigh, who volunteers at the sanctuary and with can collecting, said the effort has generated nearly $60,000.

Both Karapf and Padavick stressed the need for each organization in Rowan County dedicated to helping animals.

“A pet is not just a novelty or a toy that you discard when you’re tired of it when it’s no longer a puppy,” said Mills. “That happens so many times. We want to stop that.”

But, with pet overpopulation and neglect an expansive problem, the sanctuary lacks the capacity to help every animal in need.

Accordingly, they aren’t open admission, said Padavick, whereas places like the Rowan County Animal Shelter accept every animal brought to them.

Padavick screens her animals in much the same manner as she does potential families. She evaluates their temperament and needs, weighing these things against the private-sector costs of caring for them.

Accepted dogs and cats with medical needs will be treated during their stays. According to shelter veterinarian Dr. Mari Maristany at the Rowan County Animal Shelter, shelter animals with medical needs are usually cared for away from the shelter on medical foster.

On the rare occasion that animals are returned to Faithful Friends, animals are always accepted and a contract behaviorist will work with them before they are placed back up for adoption.

At the animal shelter, Maristany said returned animals are always accepted and go through the same process as their first stays.

If a behavior issue is identified, animals may be adopted out to rescues rather than the general public, she said.

“I like this a lot better because I have one-on-one with all the pets that I take care of,” she said. “I treat them like they’re mine.”

She said this gives her a unique perspective.

“Many pets that come in are unhappy at first because of their surrender,” said Wilkerson. “But once they realize what a happy place this is, then they pick up and are fine.”

Karapf said that this individualized attention leads to one key benefit.

“You can tell this is a place of compassion,” she said. “That’s what the animals get big doses of here.”