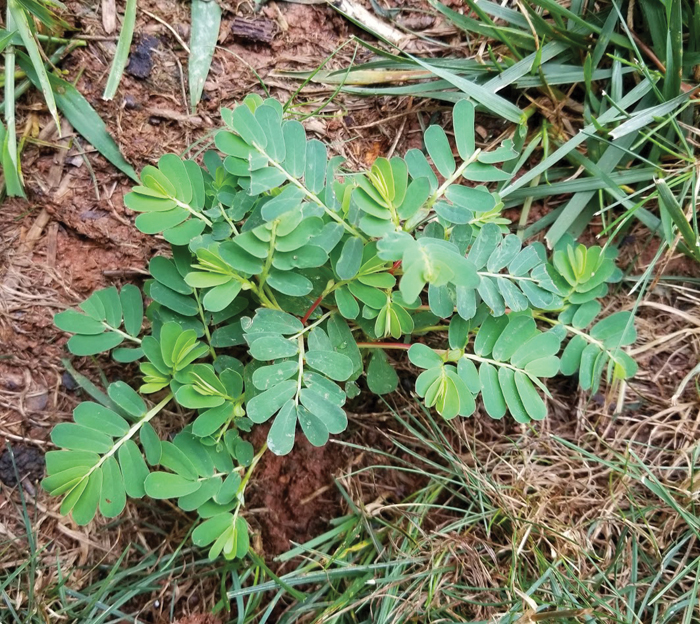 Chamberbitter (gripeweed, leaf flower, little mimosa) is tough, grows fast, and is drought tolerant — and is also known to be used as an herbal remedy for kidney stones. photo by Darrell Blackwelder

I discovered a new weed in my lawn this week. The weed is chamberbitter (Phyllanthus urinaria) also known as gripeweed, leaf flower or little mimosa. It reminded me of a lady who told me she never had weeds until her new neighbor moved in a couple of months before. She was right in one aspect, as people are a major source of distribution of noxious weeds.

Even though weeds are also spread by animals, windy weather conditions and water, pesky weeds can arrive to different locations in container plants, mulch, cattle feed and hay. Weed seeds can even be transported on shoes and clothing gathered inadvertently while visiting other countries.

Chamberbitter is a warm season annual that has emerged in our area over the past few years. The plant grows widely in South America and Asia where it is used as an herbal remedy for kidney stones. Alabama is inundated with the plant which is now on the list of noxious weeds. Chamberbitter is difficult to control for several reasons. It is tough, grows very fast, and is drought tolerant. After germination it produces flowers and an abundant amount of viable seeds. The flowers produce small seed capsules that literally explode, spreading seeds in many directions away from the plant.

The weed can be controlled with broadleaf weed killers for cool season turf, but you need to be persistent. Go to https://hgic.clemson.edu/factsheet/chamberbitter/ for more detailed information.