Conversation pieces: All-Ford Show at transportation museum offers a story with every vehicle 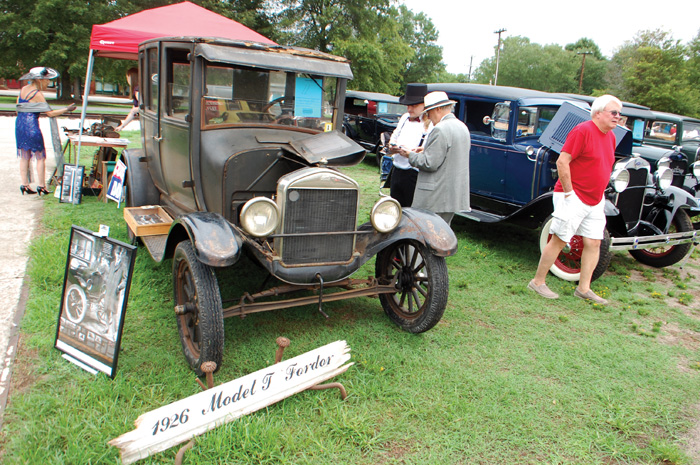 Mark Wineka/Salisbury Post Ford lovers Darren Overcash (top hat) and Walter O'Neal (suit) compare notes next to Overcash's 1926 Model T Fordor. At right is Ed Longino near his blue 1930 Model A, and at far left, in 1920s attire, is O'Neal's wife, Joyce. The O'Neals brought their 1929 closed cab Ford pickup to the All-Ford Show at the N.C. Transportation Museum Saturday.

SPENCER — It was the simplest of things, but it made people stop by Ed Longino’s 1930 Ford Model A Tudor on Saturday and take a second look.

Longino had placed a Franklin Mint replica of a Model A on a rotating stand and set it atop the trunk of his real Model A.

It proved to be a conversation piece, and if anybody stayed around long enough, Longino might tell them why his car had a close connection to a boat and movie star Ben Affleck.

But more on that later.

This 14th annual All-Ford Show at the N.C. Transportation Museum is one of the museum’s largest car and truck shows during the year, along with next Saturday’s (9 a.m.-1 p.m.) All-GM Show.

Proceeds from both the Ford and GM shows go toward support of the vehicle exhibits at the museum, which Chloe Goho said encompass roughly 65 cars and trucks, including such gems as a 1907 Ford Model R, a 1913 Speedster and a 1914 electric car.

Goho said only six of the Model Rs are known to exist, and even Ford Motor Co. doesn’t have one. Volunteers such as Dick and Chloe Goho help with the vehicle exhibits and in promoting the Ford and GM shows.

Leading up to Saturday’s event, the volunteers attended car cruise-ins from Charlotte to Mount Airy to hand out flyers promoting both shows, which attract individual enthusiasts and members of car clubs.

Four trophies were awarded in vintage and modern categories.

Speaking of vintage, Joyce and Walter O’Neal of Sherrills Ford in Catawba County like to delve into what Joyce calls their “costume closet” so they can wear vintage clothing that goes with their 1929 closed cab Ford pickup.

Joyce said she routinely scours thrift shops and Goodwill stores for clothing. With her hat and shiny, skinny dress Saturday, she looked much like a 1920s flapper girl.

“It’s the most fun finding the stuff,” Joyce said.

Also dressed in attire going with his 1926 Ford Model T Fordor was Winston-Salem accountant Darren Overcash. He and his wife, Laura, have gone full in on restoring their Model T, which was found in the back yard during an estate sale almost two years ago.

It had been covered by heavy black plastic on a hoarder’s property, but was still in pretty good condition, all things considered. Darren has replaced important parts such as the fan and all of the wiring.

He needed someone else’s help in rebuilding the carburetor. This is his first car project, Darren said, and Model T’s are supposedly the simplest cars, so he thought it was a good one to start with.

“I’ve encouraged him,” Laura said, “but at the same time, I’m the voice of reason.”

Parked next door to the Overcash Model T was Longino’s Model A.

“This draws a lot more attention than the boat,” Longino said.

About that boat: Longino owns a 1930 Chris-Craft boat, which was used in the 2016 Ben Affleck movie “Live by Night.”

Longino and his wife spent nine days on the set of that movie and happened to fall in love with all the Model A Fords that also were used.

Longino said his boat ended up being in four scenes. He actually bought his Model A about two years ago while in the middle of the ocean on a cruise.

The cruise ship had a vintage Rolls Royce on display on one of its decks, and it was by that car Ed took the opportunity to tell his wife he had just bought a Model A for their anniversary.

Ed purchased the car from a reputable car dealer in Detroit, and he showed her its picture on his cellphone.

Since then, Longino, who lives on Lake Norman in Troutman, has joined the Queen City Model A Club of Charlotte. He said its members have been great in helping with the Model A’s needs and maintenance.

“It’s a real, learning, hands-on thing,” Longino said. “… The club is real special in the way they help their members.”

The Longinos held an ice cream social for the club, giving members the chance to ride in their 1930 boat.

As for the Model A, Longino takes it to cruise-ins in Troutman on Friday nights and to events from the beach to the mountains. Cruising speed is only 40 to 45 mph with the 40-horsepower motor, and the gas mileage isn’t great — roughly 10 miles per gallon.

But his grandkids are mesmerized by the Model A, Longino said — and isn’t that what’s important?

Saturday’s show had all manner of other Ford cars — Falcons, Fairlanes, Galaxies, Mustangs, Thunderbirds, not to mention LTDs and Mercurys. And don’t forget the trucks, such as Rangers, F11s, F-150s and Broncos.

It’s a conversation piece for just how rare it has become and is on the Hemmings extinction list, Van Camp said. “You just can’t find anything original for this car anymore,” he added.

Van Camp’s father bought the Capri new, and it became the first car Robert drove in high school. It sold for $3,800 new and featured the first 60-degree, six-cylinder engine, which did not require a timing belt.

His “S” version was designed like a tank. Old friends, when they see the car today. tell Van Camp, “My gosh, you still have that?”

Van Camp said he has a niece and nephew who are fighting to own the Capri someday.

One of the Ford trucks among the many grabbing people’s attention Saturday was Jim Evans’ 1954 Ford F100 Custom pickup.

Evans has it painted and detailed to look like a truck that would have felt right at home at his dad Cecil’s old Shell service station in Lexington.

Evans remembers one of his dad’s pickups from this era — the service station operated from 1951 to 2003 — in the same yellow and red colors. Truth be told, he added, Cecil’s was a Chevrolet and probably a few years older.

The bed of the pickup has wooden railings, on which is inscribed the Shell slogan from the day — “Service is Our Business.” Jim and his son did all the restoration work on this 1954 truck, which was a deluxe version with factory air and defrost and a 6-volt electrical system.

“It does bring back a lot of memories,” Evans said.

Evans will return this coming Saturday to the All-GM Show at the transportation museum. He’s bringing his 1966 Chevelle Super Sport with its factory four-speed and 396 motor.

“It’s a good conversation piece, too,” he said.