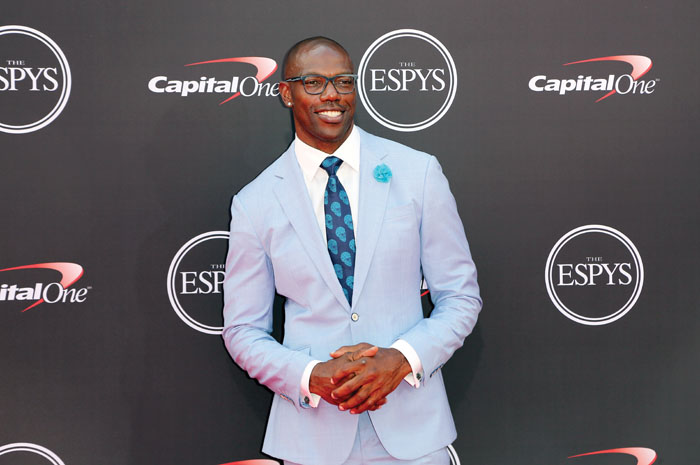 FILE - In this July 18, 2018, file photo, former NFL player Terrell Owens arrives at the ESPY Awards in Los Angeles. Despite his decision to not attend Saturday's Pro Football Hall of Fame induction ceremonies, Terrell Owens will be "honored" by the hall for his NFL career. Hall President David Baker tells The Associated Press on Monday, July 30, 2018, that the Canton, Ohio, shrine's mission statement begins with the goal "to honor the heroes of the game."(Photo by Willy Sanjuan/Invision/AP, File)

Leave it to Terrell Owens to choose to become the first person to celebrate being inducted into the Pro Football Hall of Fame somewhere other than at the Canton, Ohio shrine.

The receiver who provided so many exhilarating and exasperating moments during one of the NFL’s most prolific careers is about 600 miles away from Canton this weekend. Hours before the other inductees are honored, Owens will give his own acceptance speech at Chattanooga , where he played college football and basketball and ran track.

Owens announced on Twitter in June that, while “incredibly appreciative,” he wouldn’t attend the induction ceremony. Owens never shared his reasons for staying away. Less than a month later, Owens again used social media to say he’d hold his own induction ceremony in Chattanooga.

“Getcha popcorn ready!” wrote the man who once celebrated a touchdown with popcorn.

Owens said Friday in Chattanooga there’s a “flaw in that system” about how Hall of Famers are selected and he wanted to “make a stand” for future candidates. Owens, who wasn’t selected to the Hall of Fame until his third year of eligibility, noted how grateful he was to accept this honor “right here where it all began.”

He’s been quite chatty on social media in the weeks leading up to his induction. Owens tweeted that he “wouldn’t have a PRO career if it wasn’t for Chattanooga #THISISFORYOU.” When asked why he’s bypassing the Canton ceremony, Owens tweeted that “I don’t need to be on their stage to do it. I’ll be fine & im sure they will be too.”

Chattanooga remains a place where Owens is loved for what he accomplished well before becoming an NFL star. Owens had 2,320 career yards receiving in college and also played basketball on two NCAA Tournament teams before the San Francisco 49ers selected him in the third round of the 1996 draft.

In the NFL, Owens strung together numerous antics — posing on the Dallas Cowboys’ star logo at midfield, engaging in sideline tirades — with five teams over 15 seasons. But his college coaches marveled at his work ethic and considered him fun to coach.

“First guy (on the field), last guy off,” former Chattanooga football coach Buddy Green said. “He worked hard, man. He tried to get better every practice. You’d put him on a special team, and he was the first guy down the field. He just loved to play the game. He was great to coach. He worked as hard as anybody on the field, even harder probably.”

Mack McCarthy coached Chattanooga basketball during Owens’ years on campus and remembers a guy who could come off the bench and defend at any position.

“He could not have been a better teammate,” McCarthy said. “He couldn’t have been better to coach.”

Owens has a busy weekend planned for his return to campus.

. Athletic director Mark Wharton said the school will have a private dinner for him Friday night and estimates about 2,000 people will gather at McKenzie Arena for Owens’ induction speech Saturday afternoon.

Plans to celebrate Owens’ Hall of Fame career in Chattanooga had been in the works since March. That’s when Wharton attended Owens’ induction into the Alabama Sports Hall of Fame and heard some of the receiver’s stories from his college days for over an hour.

“From there, his team started saying fairly immediately that he wanted to do something in Chattanooga round the Hall of Fame,” Wharton said. “I assumed — we all assumed (since) nobody’s not gone to Canton — we assumed and started planning for the weekend before. Then in May or so, Terrell notified all of us his desires to have it here.”

Owens’ decision to avoid Canton has been called a mistake by Dallas Cowboys owner Jerry Jones, Owens’ former boss who was inducted into the Hall of Famer last year. Several former players and Hall of Famers also have criticized Owens.

The Pro Football Hall of Fame still will honor Owens as part of the weekend festivities. Owens, who ranks second in NFL history in career yards receiving (15,934) and third in touchdown catches (153) , will be part of the 2018 class exhibit with his picture on a light standard at Tom Benson Hall of Fame Stadium and his own glass locker.

“We respect he has strong feelings of his own and I respect his right to make that decision,” Baker said. “I invited him to the hall, even at the last moment he would be welcomed, and he is welcomed every day the rest of his life. Even though he is not here, we will honor him to the best of our ability.”

Owens has never wavered. He retweeted someone who noted any message he provides in his induction speech would be heard by many more people in Canton rather than Chattanooga.

“This choice wasn’t made for the millions,” Owens replied via Twitter . “It was made for the ones that matter.”