Prep Football: Numbers are much improved for Carson Cougars 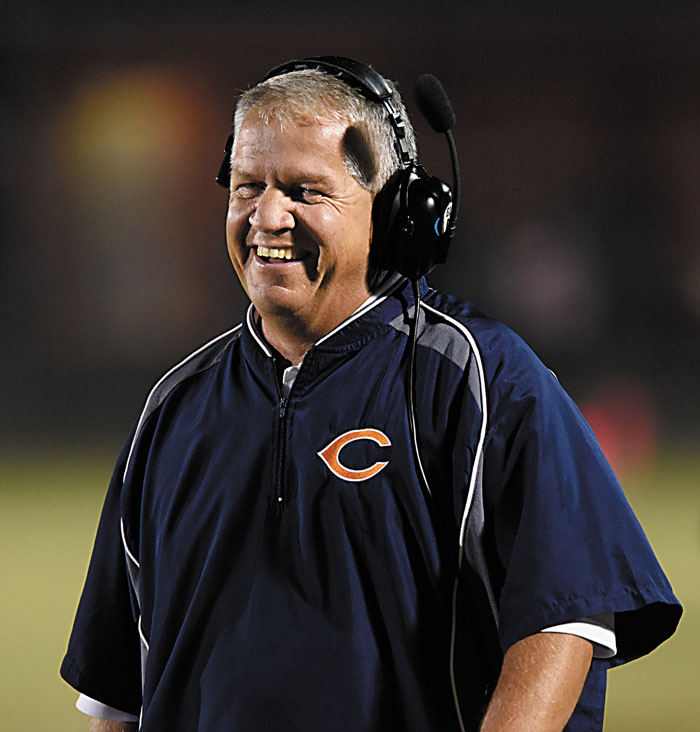 CHINA GROVE  — Joe Pinyan, a long-time Mooresville assistant who has turned in a memorable head coaching career at Salisbury and Carson, is now in his 34th season of football.

Most educators look forward to that 30th anniversary and retirement from the school system, but Pinyan, who guided a state championship team at Salisbury in 2010, keeps plugging along. Time flies, and this will be Pinyan’s sixth season at the helm of the Carson Cougars.

“People ask me why I’m still doing it, because I could’ve retired a while back, but coaching football is what I do,” Pinyan said. “And every year when that first week of August comes around, this is what I want I want to be doing.”

Pinyan had tremendous teams at Salisbury. The Hornets were a force to be reckoned with in 2A every year as that Darien Rankin-Romar Morris-John Knox-Keion Adams-Justin Ruffin-Brian Bauk crew rolled through.

Carson was modestly talented last year, had pitiful varsity numbers for a 3A school (29, and that was before guys started getting hurt) and a murderous non-conference schedule.

The 3-8 record Carson managed in 2017 might have been Pinyan’s finest coaching job.  Oponents out-rushed the Cougars by 500 yards and out-passed them by 800 —  so Carson easily could’ve gone 0-11. Somehow, the  Cougars managed wins against South Rowan, East Rowan and North Iredell. They were one play away from knocking off Central Cabarrus and Statesville, winning five and being in the state playoffs.

“Talent goes in cycles and the number of kids you have in a program cycles,” Pinyan said. “You always aim for 100 kids, 25 football players in each class. We were in a down cycle last year, but no one cried the blues for us, and we had to ride that cycle out and try to build something with what we had.   This year we’ve got 87 kids. That’s still not 100, but we can’t be greedy. Our numbers have improved a lot.”

While the other five teams in the county have settled on a starting quarterback, Carson has serious competition between two seniors that probably will last through the scrimmages. Josh Lee  has mostly been a running back in the past, although he quarterbacked the Cougars for two games last year when Cole Sifford was out with an injury. Justin Smith, who started some games at East Rowan, transferred to Carson last year.

“It’s been friendly competition with both guys pulling for each other,” Pinyan said. “Whoever isn’t the starting quarterback won’t be sitting on the sidelines. They’ll help us somewhere.”

No matter who the quarterback is, Carson will be a run-heavy team. Pinyan’s teams always are. It will be a committee of backs, and Carson is as blessed with ball-carriers as it’s been since the Brandon Sloop-Darren Isom days.

Hunter Courtney will be a guy to watch. He’s fast and was having a productive sophomore season (283 rushing yards, 5 TDs) when he broke a leg in the East Rowan game. Sophomore C.P. Pyle is coming off a strong American Legion baseball summer and will provide more speed and unlimited energy.

“Pyle missed one practice for the Legion banquet, but he’s one of those guys that’s going to be there every day and is on time for everything,” Pinyan said. “He never misses a beat.”

The offensive line, patched together at times last season, should be a real strength with players such as Nick Klein, Robert Barringer and Nick Moore returning.

A.J. Jackson, a jack of all trades who has played all over, is expected to be mostly a receiver this season.

Teolyn Woodruff will anchor the defensive line.  The second level of defense, the linebackers and spurs, will be led by sure-tackling standouts Jacob Taylor and Josh McCurry. Thairell Parks and Steven Shuping will set the tone in the defensive secondary.

“We took our lumps last year, but a lot of guys got experience,” Pinyan said. “We’ve got some senior stability in a lot of places this year.”

Andrew Bradshaw, the all-county long snapper is back, and Carson has two good promising kickers.

The coaching staff is stable and again will include former head coaches Barry Mitchem and Jason Rollins.

“It’s great to be able to go to those guys for advice,” Pinyan said. “I love our staff. We’ve got some good, young football minds.”

A new face on the staff will be Dennis Rivers, a coach who worked for Rollins at South.

Carson will be operating against the same schedule of opponents, which is good news and bad news.

The bad news is a non-conference stretch that includes A.L. Brown and Davie County back-to-back, although Carson should be more competitive in those games this year.

The good news is it’s a very local schedule. The longest trip for the Carson program in 2018 will be when the jayvees travel 42 miles to play North Iredell at Olin. Carson is the only team in Rowan that will play all the other county teams. Carson plays three county opponents in the first four weeks, plus neighbor A.L. Brown.

Carson already has shared camp workouts with Mount Airy. Carson will scrimmage West Iredell at 6 p.m. at West Rowan on Aug. 10 as part of the Rowan County Jamboree. Before that, on Aug. 8, the staff will get a chance to evaluate players in a home scrimmage that also will include East Davidson, Forbush and Alleghany.

“We’ll get in a lot of jayvee work in that scrimmage,” Pinyan said. “That will give us a chance to make decisions on which names are going to be on the board, decisions on which sophomores will start out on varsity. If we put a sophomore on varsity, that means he’s there there to  play, not to sit, and it will give another kid a chance to get on the field for the jayvees.”

Pinyan admits his team “needs to be more athletic,” but the Cougars appear to be better than last year. Whether that translates into more wins, only time will tell.

“I really like this group,”Pinyan said. “We just had one of the toughest practice weeks I’ve ever seen as far as the weather. We’d get out on the field and the rains would come, but our kids kept working even if they had to go to the gym or a classroom to do it. They never lost focus. They’re determined to keep getting better.”