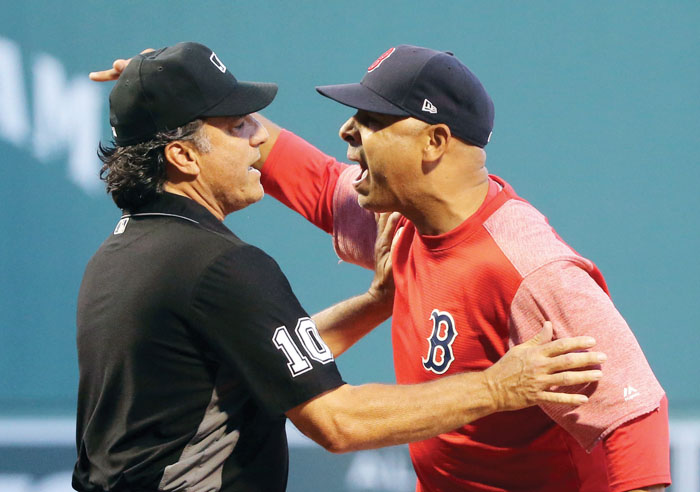 Boston Red Sox manager Alex Cora is held back by first base umpire Phil Cuzzi (10) as Cora argues with home plate umpire Adam Hamari after both Red Sox and New York Yankees pitchers were warned against hitting batters, during the first inning of a baseball game at Fenway Park, Friday, Aug. 3, 2018, in Boston. Cora was ejected. (AP Photo/Elise Amendola)

BOSTON (AP) — After Boston manager Alex Cora was ejected in the first innings, Rick Porcello ensured there was no need for further outbursts.

Porcello pitched a one-hitter, retiring his final 21 batters and striking out a season-high nine in leading the Red Sox over the New York Yankees 4-1 victory Friday night.

Cora was ejected one pitch into the bottom of the first.

“It definitely got emotional, but I think more than anything it probably fired us up and might have got us locked in,” Porcello said.

Porcello walked none, faced one batter over the minimum and needed only 86 pitches in a game that took 2 hours, 15 minutes — the fastest nine-inning Yankees-Red Sox game since May 6, 1994. Steve Pearce homered for the fourth time in two nights, and the Red Sox won for the sixth time in seven games to open a season-high 7½-game lead in the AL East and at 77-34 moved 43 games over .500 for the first time since 1946.

Porcello hit Brett Gardner with an 0-2 pitch starting the game, and New York’s Luis Severino (14-5) answered with a high-and-inside fastball when Mookie Betts led off the bottom half.

Plate umpire Adam Hamari warned both dugouts, and Cora came charging out of the dugout claiming it was retaliation for the pitch that hit Gardner.

“I understood the situation,” Porcello said. “I definitely had it in the back of my mind form the moment that it happened, but you’ve still got to slow down and pitch a ballgame.”

Severino said there was no intent on the pitch to Betts, other than to come inside.

Betts, who barely had a chance to get up and dust himself off before Cora was ejected, wouldn’t speculate — or say openly, anyway — on Severino’s intent.

Miguel Andujar’s leadoff homer in the third was the only hit allowed by Porcello (14-4), who matched his season high for strikeouts and pitched his first complete game since July 23 last year.

“We’re playing good ball. If we’re not pitching well, we swing the bats well that night,” Porcello said. “It’s been a good run so far, but we’ve got a lot of baseball to play and we’ve got to keep going.”

Porcello had a 3-0 lead after the first, when Andrew Benintendi doubled and Pearce, who homered three times Thursday, hit a two-run drive over the Green Monstert. Eduardo Nunez added an RBI single in the first, and Mitch Moreland singled in a run in the fifth.

“I wish I could have stayed in the dugout and enjoyed it from there,” Cora said.

Severino (14-5) allowed four runs, seven hits and three walks in 5 2/3 innings, dropping to 0-3 in four starts since a July 7 victory at Toronto.

New York has lost three straight games for only the second time this year; Tampa Bay swept the Yankees from June 22-24.

“We’re being tested to a degree, which is ultimately going to happen in a big league season,” manager Aaron Boone said. “But the bottom line is we’re still in position here to potentially have a special season.”

CLEVELAND (AP) — Shohei Ohtani hit two home runs in a game for the first time in the major leagues, and the Los Angeles Angels defeated the Cleveland Indians 7-4 on Friday night.

Ohtani, whose four hits were also the most of his big league career, singled in the eighth and scored the go-ahead run on David Fletcher’s double.

The Angels won at Progressive Field for the first time since June 17, 2014, breaking a 10-game skid.

Ohtani hit a two-run homer in the first and a solo home run in the third off Mike Clevinger.

Justin Anderson (3-2) pitched the seventh and the Angels’ bullpen held the Indians to one run over the final four innings.

It was Davis’ sixth blown save of the season and his second in as many days after losing in St. Louis on Thursday.

Davis (1-5) struck out Mike Moustakas to start the inning before allowing a pair of one-out walks. After Jonathan Schoop popped out, Thames hit a 1-1 pitch deep into the right-field bleachers to end it.

Miller Park continues to be a house of horrors for Davis, who also allowed a walk-off homer to Travis Shaw in his last appearance at Milwaukee with the Cubs on Sept. 23, 2017.

Pittsburgh overcame a rough outing by Archer, acquired from Tampa Bay earlier in the week, as gave up five runs and seven hits in 4 1/3 innings. He struck out six and walked four.

The Pirates broke a 6-6 tie in the eighth when Josh Harrison singled with one out off Jordan Hicks (3-3) and Jordy Mercer walked. After pinch-hitter Jose Osuna struck out, Frazier drove in Harrison by grounding a single into center field.

Kyle Crick (2-1) gave up Jedd Gyorko’s tying RBI grounder in the top of the eighth.

Felipe Vazquez pitched a scoreless ninth for his 25th save, the most in a season by a Pirates left-hander.

Johan Camargo homered in the second, a drive off the facing of the second deck in right field. DeGrom hit a tying single in the third against Anibal Sanchez (5-7), then allowed Ozzie Albies’ go-ahead double in the fifth.

DeGrom (5-7) gave up six hits in eight inning innings while striking out nine and retiring his final 12 batters after Albies doubled. He leads the major leagues with a 1.85 ERA but is 0-5 in seven starts since June 18, tying the most consecutive decisions he has lost in his big league career.

A.J. Minter worked around an error in the ninth to remain perfect in eight save chances.

Jose Quintana (10-7) allowed one run and four hits in six innings, leaving with a 3-1 lead.

Pedro Strop nearly wasted a 5-2 advantage, allowing Cory Spangenberg’s RBI double and Travis Jankowski’s run-scoring grounder before third baseman David Bote threw out Spangenberg at the plate trying to score on Manuel Margot’s grounder. Baez had thrown out Jankowski at the plate in the eighth when Jankowski tried to score on Hunter Renfroe’s grounder to second.

Strop struck out pinch-hitter Austin Hedges with a man on for his sixth save in nine chances.

Tyson Ross (6-9) gave up three runs and six hits in five innings as the Padres lost for the eighth time in their last nine games.

Seranthony Dominguez recorded the final four outs for his 12th save in 13 chances as the Phillies won their third straight to remain a half-game in front of Atlanta for first place in the NL East.

Velasquez (8-8) struck out seven and walked one to continue his strong form. The right-hander has a 0.71 ERA in his last five appearances. Velasquez didn’t allow a hit until Miguel Rojas’ two-out single in the fifth.

Brian Anderson had two hits with a double and an RBI for the Marlins, who have lost four in a row.

Velasquez helped himself in the third when the Phillies took a 1-0 lead. He led off with a double to right off Trevor Richards (3-6) for his second extra-base hit in his 97th career at-bat and scored on Rhys Hoskins’ single.

Nicky Delmonico had a two-out double in the 10th off Jose Alvarado (1-4) and was replaced by pinch-runner Adam Engel. Tim Anderson was intentionally walked, and Moncada hit a liner over left fielder Jake Bauers.

Tyler Danish (1-0) struck out Jesus Sucre with two on and two outs in the ninth, and Hector Santiago got his first save since 2012. He walked Mallex Smith leading off the bottom half of the 10th, Kevin Kiermaier popped up a bunt and Matt Duffy grounded into a double play.

Texas has outscored the Orioles 28-11 in winning the first two of a four-game series between last-place teams.

Rookie right-hander Ariel Jurado (2-1) won his second straight start for Texas after a loss in his major league debut. He has twice been recalled from Double-A Frisco, where he was 5-3 with a 3.28 ERA.

Another rookie, Baltimore’s David Hess (2-6), didn’t make it out of the fourth inning in his 10th major league start.