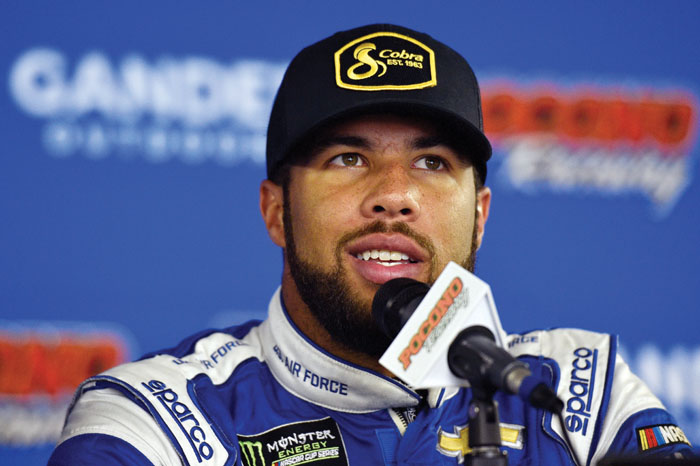 WATKINS GLEN, N.Y. (AP) — It’s been almost a week since NASCAR Cup rookie Bubba Wallace became a headliner after a violent crash , and he’ll never forget it.
“I’m still reliving it,” Wallace said Friday at Watkins Glen International. “And, it’s a tough one to watch, but man we hit a ton.”
The Pocono race was red-flagged with six laps left in the wake of Wallace’s crash. He lost the brakes on his No. 43 Chevrolet and the car shot across the grass and slammed into the wall. Several tense moments passed before Wallace flipped down his window net.
Once out of the car, Wallace sat on the track and slumped against his car before being taken to the track medical center. Wallace says he’s healed and ready to go racing again.
“It’s all good,” he said.
Safety in NASCAR became a focus after the death of Dale Earnhardt at Daytona in 2001. That Wallace was not injured is a testament to the progress that’s been made. The collision cracked a section of the energy-absorbing SAFER barrier.
“It’s good to be able to come away and walk away from that and just know that I had a lot of people’s support,” Wallace said. “That was pretty cool as well. I think that was obviously a big highlight for me was just getting out and seeing everybody reaching out and showing their levels of concern.
“It’s a fascinating wreck to watch,” he added. “I hate that it’s mine, you know? So, all week long, and even up to this day, I still see it just because it’s on Instagram and Twitter. People are putting it out there and people are taking stuff from the podcast and creating articles about it.”
Wallace, who finished second in the season-opening Daytona 500, the highest finish for a black driver in NASCAR’s signature event, has only one other top-10 finish in his first 21 races driving the No. 43 Chevrolet for Richard Petty Motorsports. He has led laps this season at Bristol, Pocono and Talladega Superspeedway.
___
More AP auto racing: www.racing.ap.org