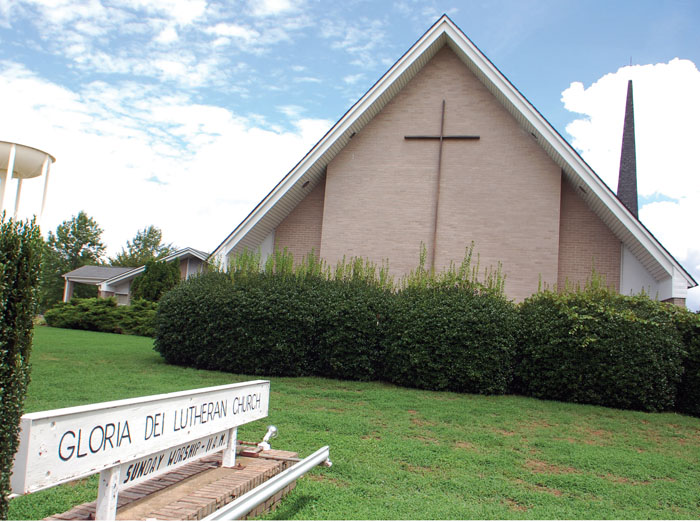 SALISBURY — The congregation at Gloria Dei Lutheran Church has set aside Aug. 12 to celebrate the church’s 50th anniversary of being located at 1908 Statesville Blvd.

Bishop Tim Smith of the N.C. Lutheran Synod will preach at the 11 a.m. service Aug. 12.

The day’s schedule is as follows:

• 9:45 a.m.: A time set aside in the Rhoads fellowship building for reminiscing and seeing photos of the church, its leaders and congregations through the years.

• Noon: A covered-dish luncheon in the fellowship building with the church providing barbecue and chicken tenders.

According to a church history, written by then-Pastor William H. Battermann in 2010, a groundbreaking on the Statesville Boulevard church (a nave and education building) was held Nov. 12, 1967, and the formal dedication came Aug. 11, 1968.

Attendance at the dedication was recorded as 199 people.

“Once in the new building,” Battermann wrote, “the congregation rejoiced.”

Over 1969 and 1970, the modest church added 49 members, thanks in large part to its more visible location on Statesville Boulevard. Organized in 1960, the church had previously been in a much smaller building in the Meadowbrook subdivision on Malcolm Avenue.

“One story indicates the eagerness of the people to get into the new building once it was nearing completion,” the church history says. “Several of them gathered at the Malcolm Avenue site and got a truck so they could move the organ over to the new location.

“When they got there, the building was locked, but they did manage to find a way in and brought the organ into the building.

“When he saw the organ, the contractor informed them that the building was not actually theirs yet and that they would have to remove the organ and bring it back later.”

In writing the history, Battermann also made this note:

“What needs to be pointed out is that the building never was a goal in and of itself. It was always viewed as a site for the ministry and mission of the congregation. The inadequacy of the former site had to be dealt with.

“It was demonstrated by a unanimous vote to move to the Statesville Boulevard site.”

The Rev. Dr. William M. Johnson Sr. was pastor during the building campaign. The church hired Wayne Koontz as the architect and Wagoner Construction, the general contractor.

Over the years, the church on Statesville Boulevard would see some changes, improvements and additions.

The first change came in revamping the heating and air conditioning.

With a second change, the choir moved from its loft in the balcony to the chancel area.

“The third change reflected the architectural design of chancel areas in the Lutheran worship and provided for a free-standing altar,” the history says.

More significant modifications were to come. The congregation delayed installation of stained-glass windows until all outstanding debts were paid off in 1981, when three mortgages were burned during the Jan. 31 worship service.

The congregation voted Aug. 28, 1983, to install stained-glass windows, and Pastor Harold Rhoads guided the project, which led to stained glass in the nave and narthex and by the exit doors.

Each window was given as a gift or memorial.

‘The congregation’s need for a fellowship building was evident for a number of years,” Battermann wrote. “During the life of Gloria Dei, from 1960 until the early ’80s, the only space available for fellowship events was the area in the education building and the small kitchenette.

“During many events, the members used the hallways and the narthex to accommodate the group that had gathered for a meal or an event for the membership.”

The congregation approved a capital fund campaign to construct a fellowship building and modify part of the education building.

Sides Lumber built the fellowship hall, named for Rhoads, and it was finished in time for the congregation’s Christmas dinner in 1986. The dedication and cornerstone placement were conducted Feb. 22, 1987, and the building was paid off 10 years later.