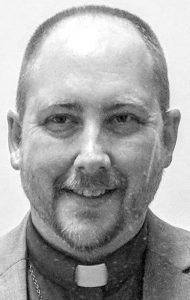 Our social and political climate has never been more galvanizing. Today’s communities are separated over race, religion, politics, sexual orientation, gender bias, and just about anything else you can think of.
However, two churches have decided to work together, in an effort to lead by example. New Hope Lutheran, a member of the Evangelical Lutheran Church in America, and Journey UMC, a member of the United Methodist Church, are two separate congregations in Kannapolis.
In addition to being from two different denominational backgrounds, the congregations differ in other ways.
New Hope worships in a traditional style liturgy, utilizing an organ with a choir for worship. Journey follows a more contemporary order of service, with a praise band leading worship.
Even the makeup of the congregations are different, both in size and age ranges. But that hasn’t stopped them from working together, in the same space.
Since June of this year Journey has been worshipping and conducting all church business from New Hope’s building. Both congregations worship at the same time, with Journey in the Family Life Center and New Hope in the church’s sanctuary.
When asked what made Journey so eager to move into a building that houses a completely different church, Pastor Mike Fongemy stated, “We see it as a wonderful opportunity.
Our idea of church is that we are doing Kingdom work. This isn’t a denominational contest of winners and losers, we are trying to use this as an opportunity to do something that isn’t being done in other places.”
James Brown, council president of New Hope, echoed Pastor Fongemy’s comments,
“We are brothers and sisters in Christ, and we have an unique chance to illustrate to the community what it is like to walk hand in hand with someone that you may have some differences with. Certainly the ELCA and the UMC have many similarities, however our two groups couldn’t appear to be more different.”
The first thing that both groups have learned is that they aren’t that different from one another. Both are very active in the community, both have made important impacts in the life of their congregations, and both live out the Christian command to love one another as themselves.
Their partnership provides many opportunities to serve the community together, while still maintaining their respective identities.
Not about the money. When talks first began between the two churches, many felt that the arrangement was for a financial benefit to New Hope.
After all, the once 400 plus member congregation has shrunk over the past several years, affected by the same declining church attendance that plagues many other churches.
But not so, says James Brown. “We saw it as a chance to live out our faith. The church council and the congregation saw another group of Christians that were in need, and we had a way to help them. We have been blessed with a large, beautiful facility that isn’t being used to full capacity right now. So why not?”
As the talks developed both sides realized that they had a wonderful gift, a chance to show the community that right now, we need to join together. We need to understand that we have differences, yes, but we all are walking through life together.
Pastor Fongemy also says, “We all have differences, but they are good differences. Where we have strengths in one area, New Hope may have strengths in another. So we can work together to accomplish more.”
One thing they have learned so far is that they aren’t as different as they thought they were. “As you begin to take down those barriers that keep you separated, you start to see that, hey, you know we really aren’t that different.
After all, we all have struggles and tough parts of life to deal with. Why not put aside our differences and make our world a better place?
“At least, that is our goal,” states Mr. Brown. “Maybe along the way more people around us will see that we should be working to bring ourselves back together, instead of finding reasons to stay separated.”

The churches are located at 1615 Brantley Rd, Kannapolis, NC 28083. More information can be found at www.livinginnewhope.org and www.journeyktown.com