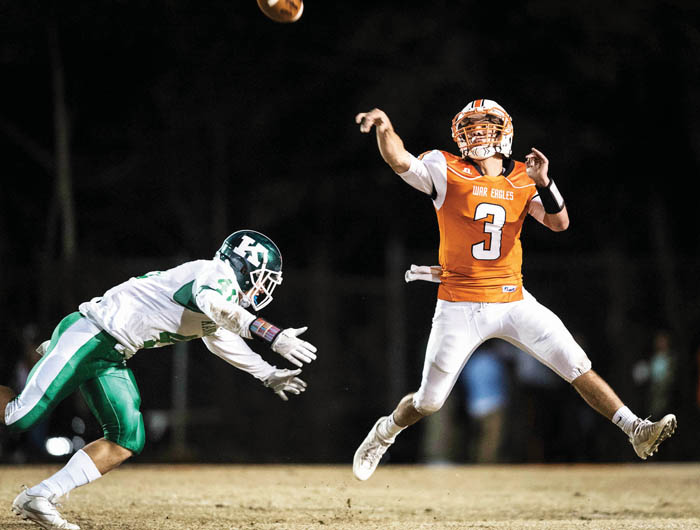 “I’m keeping that chip on my shoulder,” Reynolds said.

There’s always been doubt about Reynolds because he doesn’t look the part of a Division I quarterback. At 5-foot-11, 199 pounds, he looks like he should be playing second base for the 49ers or maybe goalkeeper.

“When I was being recruited, coaches told me a player my size had to run at least a 4.6 to have any chance in D-I,” Reynolds said.

So how is he where he is?

What Reynolds has is not easily explainable, but he’s obviously elusive. He has a sixth sense for avoiding a pass rush and he can throw accurately on the move.

“When I get out of the pocket, I’m not the fastest guy,” Reynolds said. “But I’m quick, and I’ll throw it sidearm if I have to. I always keep my eyes looking down the field, and eventually I can put the ball in the hands of one of our athletes.”

Reynolds is personable. He has courage and humble confidence, leadership skills and charisma. He’s strong for his size. On a 1 to 10 scale, he rates a 10 on every intangible. That’s why he has a chance.

In his 24 games as the starter at Davie County High in 2015 and 2016, playing mostly against 4A schools, competing against elite programs such as Dudley, Scotland County and A.L. Brown  when the playoffs came around, Reynolds broke the school record for touchdown passes with 59 and threw for 5,636 yards, the second-highest total in school history. Toss in 23 rushing touchdowns in those 24 games, and it’s easy to see why Reynolds played in the Shrine Bowl and the East-West All-Star Game.

Despite the stats and despite Davie’s 12-2 record his senior year, Reynolds was barely recruited. His lack of height was seen as an obstacle too daunting to overcome. Even Catawba College, a Division II school 15 miles from where Reynolds played his home games in Mocksville, didn’t bite.

“Catawba talked to me, but they never pulled the trigger on a scholarship offer,” Reynolds said. “It’s always been a matter of a couple of inches. That’s how it’s always been for me, and that didn’t change during the recruiting process. So I not only didn’t have any Division I offers coming out of high school, I didn’t have any Division II offers. A couple of Division III schools looked at me. Charlotte offered me a spot on the team as a preferred walk-on.”

That offer didn’t insult Reynolds. He gratefully accepted it.

This time last year, Reynolds wasn’t sure if he was even going to be involved in preseason camp. A week before that camp started,  he finally got approval to attend.

“I was fifth-string in that camp and did not get one single rep,” Reynolds said. “But I kept doing the drills every day.”

He redshirted last season, as expected. His role was modest, scout team quarterback, simulating that week’s opponent’s plays at practice, but he turned out to be electrifying. He turned hopeless situations into magical escapes — lust ike he’d always done. His teammates gave him a new nickname — “Houdini.”

He was honored as scout team MVP. That glimmer of recognition was fuel to keep him going.

“He came in last winter and said the quarterback position is up for grabs,” Reynolds said.

Reynolds entered spring ball fifth string, but was elevated to third string after two weeks. After two more weeks, he was first string.

When the Green team (starters) squared off with the White team (backups) in the 49ers’ annual spring game at Richardson Stadium in front of 7,085 fans back in April, Reynolds got the nod to start for the Green team. Reynolds was 8-for-11 passing for 73 yards.

At the end of the spring ball, he was on scholarship and at the top of the depth chart.

Charlotte was the worst D-I team in the country in 2017 as far as converting third downs. Maybe Reynolds can remedy that.

He understands that what he’s done is crazy, the kind of stuff they make inspirational movies about. Walk-ons at a D-I school aren’t supposed to be potential starting quarterbacks.

“I’m not someone who’s going to crumble under pressure,” Reynolds said. “I’ll keep pushing every day. I want to keep defying the odds.”

Charlotte, which returns its leading rusher, leading receiver and top two tacklers, opens against Fordham at home on Sept. 1.

Appalachian State visits Richardson Stadium on Sept. 8. That game is a sellout.