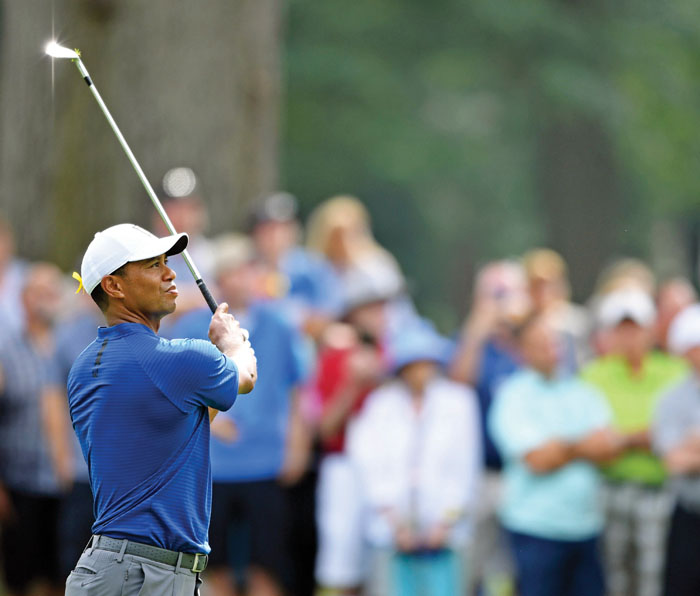 Tiger Woods follows through on his approach shot on the 10th hole during the first round of the Bridgestone Invitational golf tournament at Firestone Country Club, Thursday, Aug. 2, 2018, in Akron, Ohio. (AP Photo/David Dermer)

By DOUG FERGUSON, AP Golf Writer
AKRON, Ohio (AP) — Phil Mickelson confirmed a report that an exhibition match against Tiger Woods is set for Thanksgiving weekend in Las Vegas.
Those are about all the details he had.
Golf.com reported last month that Woods and Mickelson, who have combined for 19 majors, 122 victories on the PGA Tour and 90 years on earth, were contemplating a winner-take-all $10 million match.
ESPN said it would be at Shadow Creek on Thanksgiving weekend. Woods says he had nothing more to add. “We haven’t signed anything. Nothing’s confirmed.”
The ESPN report early Thursday did not mention prize money, corporate support or television details.
Woods and Mickelson played a practice round together at the Masters, were in the same group at The Players Championship and played a nine-hole practice round on Wednesday at Firestone. They have the most PGA Tour titles of players from their generation, though they never competed on the back nine with a major championship at stake except for the 2001 Masters and 2002 U.S. Open, both won by Woods.
Woods once played the starring role in Monday night exhibitions nearly two decades ago, which were televised by ABC. The first one was dubbed the “Showdown at Sherwood” between Woods and Duval, when they were Nos. 1 and 2 in the world. Woods won and earned $1.1 million, while Duval received $200,000. They each donated $200,000 to charity, half of it going to The First Tee.
___
RAHM’S RECOVERY
Jon Rahm missed the cut at the British Open and said his focus wasn’t there. On Thursday, he explained why.
The Spaniard said four friends from home were driving up to Carnoustie when they were involved in a car accident, and one of them was injured seriously enough to require surgery.
“At the same time, my grandpa wasn’t feeling great. He was actually undergoing surgery for something else the same day while I was playing,” Rahm said. “My mind wasn’t where it was supposed to be.”
Rahm said he stayed Saturday to help with the families because not many of them spoke English.
“And I was able to see my friend after he came out of surgery,” Rahm said, adding that his friend just got back home to Spain on Wednesday.
___
LONG JOURNEY
Russell Knox left home in Jacksonville, Florida, last Friday and traveled some 9,000 miles before arriving in Akron on Wednesday for the Bridgestone Invitational.
In a plane. On a ship. In a prop plane. And in a car.
He stopped along the way — or out of the way — to Juneau, Alaska, for a cruise with his wife.
And it was more complicated than it sounds. Knox said he was on the ship Saturday afternoon and disembarked in Juneau on Tuesday morning.
“I flew down to Seattle in a little prop plane — beautiful views — and got on the plane from Seattle, on the runway, back to the gate, off the plane, an 8 1/2- hour delay,” he said.
Knox had to take an overnight flight to Detroit, but then couldn’t get a connection and had a car service take him three hours to Ohio.
He opened with a 67.
“I played nine holes yesterday and it felt weird,” he said. “Even today, I felt weird. To shoot 3 under … anything better than 3 over I probably would have been pretty happy about.”
___
EMPTY JUG
Francesco Molinari took ownership of the claret jug on July 22 when he won the British Open at Carnoustie. He’s still waiting to pour a drink from golf’s oldest trophy.
“I’m not a big drinker,” Molinari said. “So to fill it with water would be a bit of a blasphemy, it feels like. I’m sure there will be times at the end of the season that something goes in it. But not yet.”
The jug still gets around.
Dennis Pugh, his swing coach, asked Molinari if he could sleep with the claret jug one night.
“So I was happy to share it with him,” Molinari said.
Don’t get the idea Molinari is the rare Italian who doesn’t drink a little red wine. He was on a vacation with his wife and children and still has a busy stretch ahead of him with the Bridgestone Invitational, PGA Championship, FedEx Cup playoffs and the Ryder Cup.
“No, I do drink red wine, but it’s not my first passion,” he said. “And last week there was a lot of recovery needed, so it didn’t seem like a great time to get hammered. So maybe end of the season, when everything quiets down, it will be more appropriate.”
___
WHERE TO NEXT
Only three players in the field for the PGA Championship were at Bellerive Country Club in St. Louis when it last hosted the PGA in 1992. And only 13 players were at Bellerive when it had the BMW Championship in 2008.
So it will be a new experience for most — starting with the location.
Francesco Molinari, for one, has never been to St. Louis. Does he know where it is?
“Roughly,” the Italian said with a smile. “Not exactly, but roughly.”
Rory McIlroy has been to St. Louis once, though not for golf.
“My uncle’s wedding,” he said. “I’m not kidding. He’s from Northern Ireland. He married someone from that way, somewhere in there.”
U.S. Open champion Brooks Koepka has been to St. Louis as a kid, but little recollection, but he does know a little about the city.
“That’s where Anheuser-Busch is,” he said with a smile.