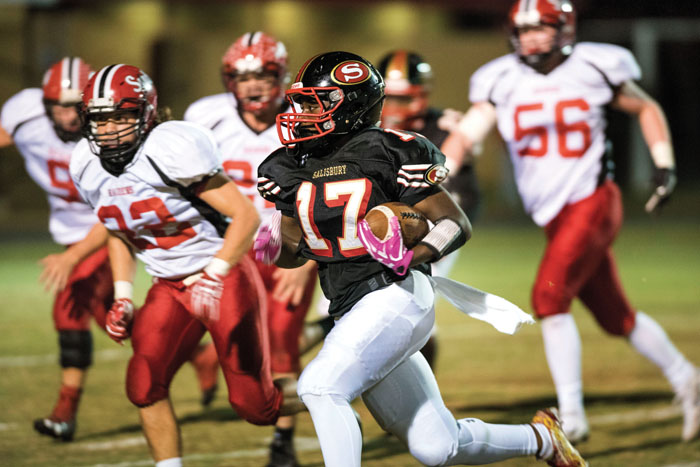 SALISBURY  — Salisbury head coach Brian Hinson is an old-school, former offensive lineman who would like to run the ball right down the throats of the Hornets’ opponents.

But you do what you have to do. As a high school coach, you can’t just go out and recruit 200-pound running backs.  You adapt to the personnel that your school has, and the Hornets, who always employed three running backs in the glory days under Joe Pinyan, will be using mostly one-back sets this time. They’ll employ a spread offense, with sophomore quarterback Mike McLean, one of the team’s best athletes, taking the snaps and making the decisions.

A quality varsity running back as a freshman last fall, McLean (436 rushing yards, 8 TDs) is a lock to lead the county’s QBs in rushing.

McLean will direct a team that is talented and quick, but also very young. Salisbury graduated 12 starters from a 7-4 club that placed third in the Central Carolina Conference behind juggernauts North Davidson and Ledford.

“It’s not the style of offensive football I like to use, but it’s the best style of football for the personnel that we have,” Hinson said. “I know  people are used to seeing Salisbury run the option, but this is what we need to do. We know Mike will do a good job and he gives us a big running threat at quarterback. He’s a mature kid, already one of our leaders. We’ve got good young leadership on this team, some hard-working non-seniors.”

Senior Raheim Walker (454 rushing yards, 5 TDs) is poised for a breakout season and is expected to be the primary running back.

Senior Tyrone Johnson  is small, but he’s one of the two swiftest guys in the county (along with West receiver Jalen Houston). He leads the receiving corps and also is a threat to take punt and kickoff returns all the way. With Trell Baker graduated, Johnson becomes the Hornets’ most dangerous weapon, their best chance for instant points.

“He’s really worked on his route-running and he gives us that great speed threat,” Hinson said.

Salisbury’s defense probably will be scarier than the offense, but that also was the case last season, when the Hornets shut out two opponents and held three others to a single score.

“That’s the strongest side of the ball for us right now,” Hinson said.

Junior outside linebacker Jabril Norman, a sack-master and backfield disrupter,  is a player of the year kind of talent. It was devastating for Salisbury last year when he missed the home playoff game with Red Springs with injury. Junior Blaine Shellhorn moves from outside to inside linebacker, but he’ll tackle everyone in sight wherever the Hornets put him.

Seniors Luke Holland and Cameron Gill give the Hornets a couple of experienced ballhawks and playmakers in the secondary.

Freshman Jalon Walker, son of Catawba College head coach Curtis Walker, could be an impact varsity player right away. Hinson, who played and coached at Catawba, has high hopes for the 6-foot-2 youngster, who probably will be an outside linebacker.

Jack Fisher, the soccer star and UNC Wilmington baseball commit, is back as the kicker, so Salisbury will have an advantage over most teams in that department.

Hinson said 70 Hornets practiced on the first day. He expects to pick up another 10 or so in the week ahead.

The first week turned out to be a tough weather week, with several evening storms causing problems.

“We stepped on the field Wednesday, did our stretching, and then the bottom fell out,” Hinson said. “But I guess most teams have been dealing with the same thing.”

Hinson’s Catawba connections are helping him build a young coaching staff. Keyon West, who caught a lot of balls for Catawba, will guide the Hornets’ wide receivers. Montravius “Trey” Evans, a four-year starter linebacker at Catawba, will be a big addition on the defensive side.

Hinson also has enlisted veteran Charlie Gray, a Livingstone graduate and a former head coach, as an offensive assistant. Hinson (East Montgomery) and Gray (Jordan-Matthews) have known each other since they were competing against each other in high school.

Salisbury’s schedule will look a bit different, with Oak Grove added to the slate on Oct 5. Oak Grove opened last fall and competed in jayvee football, but not varsity. The Grizzlies will tangle with Salisbury at Ludwig Stadium.

Mountain Heritage was on the Hornets’ schedule last season in Week 3, but that game was never played due to weather issues. That now will be Salisbury’s open week.

Salisbury will head to Cannon School for a controlled scrimmage and joint practice two days before participating in the Rowan County Jamboree hosted by West Rowan on Aug. 10. The cost is $6 for that four-scrimmage, eight-team extravaganza that includes all six Rowan schools. Salisbury will take on West Rowan in the finale at 9 p.m. That’s the only time this year that the Falcons and Hornets will share a field.

Salisbury  opens the regular season at home against rival North Rowan  on Aug. 17.

As far as the conference race, it’s going to be interesting to see if the Hornets can close the gap some on CCC bullies Ledford and North Davidson. The Hornets were outscored by those two, 27-0 and 45-0, last fall. North Davidson was ranked eighth in 2A by MaxPreps at the end of the season, with Ledford 22nd. Salisbury, which made a nice jump from a 3-8 record in 2016, was ranked 51st.