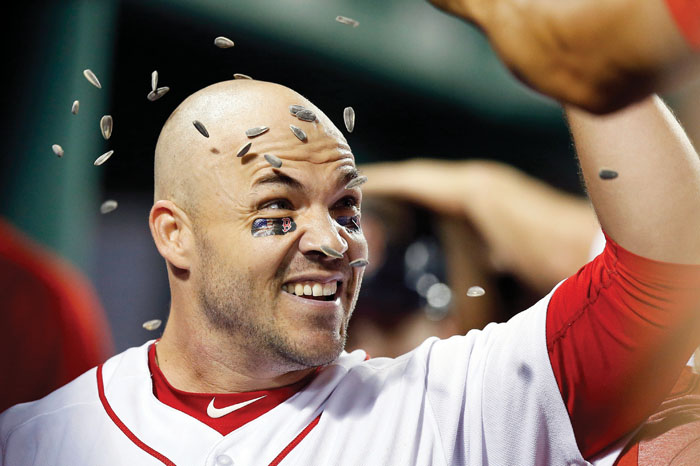 BOSTON (AP) — When Steve Pearce’s third homer of the game clanged off the light tower above the Green Monster, a few fans behind home plate tossed their caps onto the field to celebrate his first career hat trick.

When he came to the plate in the eighth for his final at-bat, he received a standing ovation from the Boston fans eager to see him make more history against the hated Yankees.

“It was a good night. A fun night. A great team win, and something that I’ll never forget,” Pearce said on Thursday night after driving in six runs with three homers to help the Red Sox beat New York 15-7.

“It was exciting, especially when you get home and you see all your teammates there, ready for you,” said Pearce, who walked on five pitches in his final at-bat. “To be able to celebrate with them, it’s a great feeling.”

In the opener of a four-game series that gave New York the potential to erase most of its division deficit, the Red Sox instead expanded the lead to a season-high 6½  games, taking advantage of manager Aaron Boone’s decision to pull starter CC Sabathia after three innings with a 4-2 lead. Jonathan Holder (1-2) faced seven batters and did not record an out.

“We have to do a better job playing a better brand of baseball especially against a real good opponent,” Boone said. “When it’s difficult, not everything going our way, we need to be airtight to minimize damage on the other side.”

Mookie Betts had four hits and two walks, reaching safely all six times he came to the plate. Pearce, J.D. Martinez, Ian Kinsler and Andrew Benintendi had three hits apiece for Boston, which has won five of its last six games and 20 of its last 25 to match a season-high 42 games above .500.

Pearce hit a solo homer in the third and then added a three-run shot in an eight-run fourth inning that erased the rest of a 4-0 Yankees lead. He also had a two-run homer in the sixth, joining Mo Vaughn and Kevin Millar as the only Red Sox players to have three home runs in a game against the Yankees.

Didi Grigorius homered twice , Aaron Hicks hit one and Giancarlo Stanton got his 25th of the season for the Yankees, who have lost just twice in the past week — playing sloppily both times — but dropped two games in the division. The rivals will meet nine more times, including the final three games of the season.

Early in the game that Chris Sale was supposed to start, the Red Sox were already trailing 4-0 and their ace was getting frustrated.

“He was like, ‘I can’t believe this,’” manager Alex Cora said after Brian Johnson filled in for Sale, the AL strikeout and ERA leader, who went on the disabled list with left shoulder soreness that he said wasn’t that bad. “But we trust B.J.”

“It didn’t look pretty in the beginning,” Cora said. “But he was able to get some key outs. He gave us a chance.”

NEW YORK (AP) — Three pitches in, Ronald Acuna Jr. was off and running.

Acuna led off with his first big league triple and reached three times, Johan Camargo hit a two-run double in a three-run third inning and the Atlanta Braves beat the New York Mets 4-2 Thursday night to extend their winning streak to four.

Acuna grounded inside the third-base bag and down the line. When left fielder Michael Conforto struggled to find the ball quickly, Acuna sped to third in 11.15 seconds, according to MLB’s Statcast. Acuna slid in headfirst as his helmet came off.

“I slowed down at first,” Acuna said through an interpreter. “I think we were all thinking double, double when it came off the bat, and I don’t think we expected it to take the hop that it did. So, I kind of slowed up at first and kind of turned it up a little bit.”

He scored when Ozzie Albies followed with a single. Acuna is hitting .357 (15 for 42) since being moved to the leadoff spot on July 20 and the Braves think the 20-year-old is even quicker than before since returning from a knee injury on June 28.

“I just know that when he came back from the injury he’s running faster than he was prior,” manager Brian Snitker said. “He’s got another gear. That speed’s a weapon for him.”

Mike Foltynewicz (8-7) won for the first time since July 11, allowing two runs and five hits in six innings. Three pitchers followed with one-hit relief as the Braves improved to 10-3 against the Mets this year.

“Just how hard he swings at the ball, kind of reminds me of Bryce Harper a little bit,” Foltynewicz said of Acuna. “Just very intimidating at the plate and when he puts the play, especially in the gaps, it’s awesome to watch him run.”

Jason Vargas (2-7) allowed four runs and six hits in five innings. He has not pitched past the fifth in any of his 11 starts.

“He had to get a few more outs than he probably should have, but I thought his stuff was good, crisp, had some swings and miss,” Mets manager Mickey Callaway said. “Kept the ball down for the most part. That’s your typical Vargas. Kept us in the game and did his job”.

Todd Frazier returned from a ribcage injury and went 0 for 4 with two strikeouts in his first game since July 8. He was booed loudly when he hit an inning-ending popup in the sixth that stranded Conforto on third.

Brandon Nimmo hit his career-high 14th homer leading off the bottom half of the first, and Freddie Freeman had a go-ahead single in the third as Atlanta took a 4-1 lead. Freeman is hitting .400 (20 for 50) against New York this season.

Freeman’s single came after Acuna took second when the Mets could not execute a pickoff play.

Pinch-hitter Luis Guillorme singled in a run for the Mets in the fifth.

Jesse Biddle pitched a perfect seventh, and Brad Brach struck out Conforto with a runner on second to end the eighth. A.J. Minter worked around a leadoff walk to Flores to remain perfect in seven save chances.

FAMILIAR FACES: RHP Kevin Gausman was activated two days, after being acquired from Baltimore and had the locker next to former Orioles teammate Nick Markakis. He also was reunited with infielder Ryan Flaherty and Brad Brach, acquired from the Orioles on Sunday. Gausman is slated to make his Braves debut Saturday.

Mets: OF Yoenis Cespedes had surgery to remove bone calcification in his right heel. He will have a second surgery on his left heel in two to three months. … LHP Steven Matz was diagnosed with a flexor-pronator strain in his left forearm and could be placed on the DL. The Mets said they will decide Friday, two days before Matz’s next turn. … INF Phillip Evans was placed on the DL with a broken tibia. He will be on crutches for at least three weeks and will not be able to resume baseball activities for a month. … RHP Bobby Wahl got two outs in the eighth in his Mets debut, his first big league appearance since May 23 last year with Oakland.

Johnson spotted the Yankees a 4-0 lead, but the Red Sox got one in the second and one in the third before taking the lead in the fourth.

With runners on second and third and nobody out, Benintendi hit a chopper back to the mound. Holder threw behind Jackie Bradley Jr., who broke for home and beat the throw to the plate with a head-first slide.

Pearce homered for a 6-4 lead, Martinez doubled and scored on Kinsler’s single and then, after Kinsler stole second, Eduardo Nunez doubled to make it 8-4 and chase Holder. Chad Green got the next two batters before Bradley doubled in another run, Betts singled and Benintendi added an RBI single.

Luis Cessa replaced Green and got Pearce on a ground ball to end the 13-batter, seven-hit (five for extra bases), 46-minute half-inning.

“The slide that Jackie made kind of turned everything around. You felt the crowd start to get into it,” Pearce said. “And it was great that we were able to take advantage. It’s a tough series, that’s a tough team, and to do that to them early is definitely great for the team.”

Yankees: RHP Sonny Gray will be replaced in the rotation and new RHP Lance Lynn, acquired from Minnesota this week. .. LHP J.A. Happ was put on the 10-day DL with hand, foot and mouth disease. He was expected to start on Saturday, then tentatively replaced in the rotation by Cessa, who instead was needed out of the bullpen in the series opener. RHP Chance Adams started Monday at Triple-A Scranton/Wilkes-Barre and could make his major league debut.

Red Sox: SS Xander Bogaerts, who was hit on the hand by a pitch on Tuesday, got the day off. Manager Alex Cora said he is on track to play Friday. … C Blake Swihart was removed from the game after six innings with left hamstring tightness.