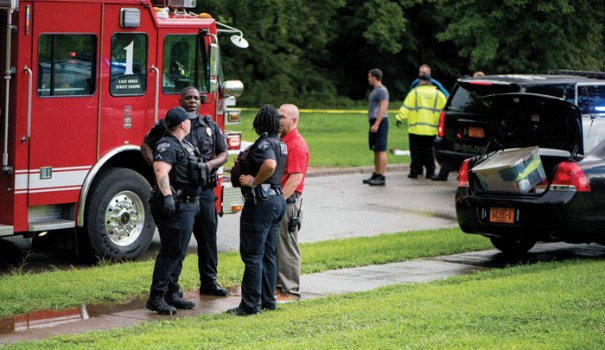 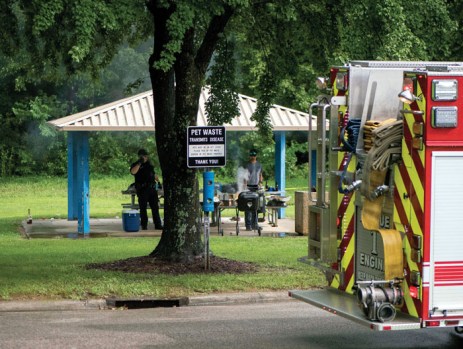 A Salisbury firefighter uses a hand-held fire extinguisher to douse one of the grills at the picnic shelter near by the shooting scene. Jon C. Lakey/Salisbury Post 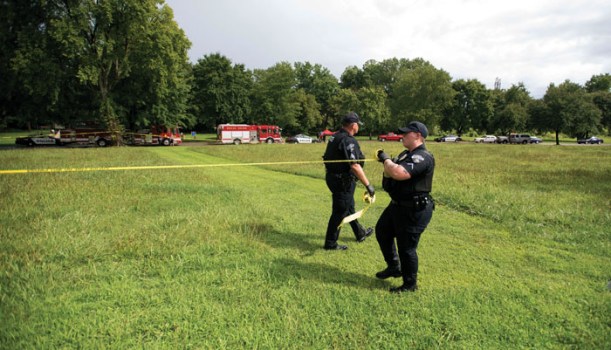 SALISBURY — A Friday evening gathering at the park turned deadly when a man and woman were shot and killed Friday.

The Salisbury Police Department has not identified the two victims.

Police said there was a large gathering at a picnic shelter in the park.

Witnesses said shots were fired and a black vehicle with three men inside was seen leaving the scene.

Dionne Kennedy said she was at home with her fiancé and her granddaughter when she heard five or six gunshots. They were in their living room when the shots rang out.

Kennedy immediately recognized the rapid sounds as gunshots and told her granddaughter to get on the floor.

Several minutes later, her fiancé went outside and saw police arriving across the street.

“This is so tragic. Nothing like this has ever happened right here,” Kennedy said.

She called the whole scene shocking.

Another neighbor, who did not want to give her name, said she often walks her dog in the park and takes her children there, and she has used that same picnic shelter.

This was the first time she could recall a shooting in the park.

“Another unfortunate example of gun violence in Salisbury,” Stokes said. “I, as the chief, am extremely concerned about it. Our community needs to be worried about it. We really need to find some sort of resolution for this violence we are seeing in Salisbury.”

The deaths are the sixth and seventh murders in the city this year.

Anyone with information is asked to contact the Salisbury Police Department at 704-638-5333 or Salisbury-Rowan CrimeStoppers at 866-5245.